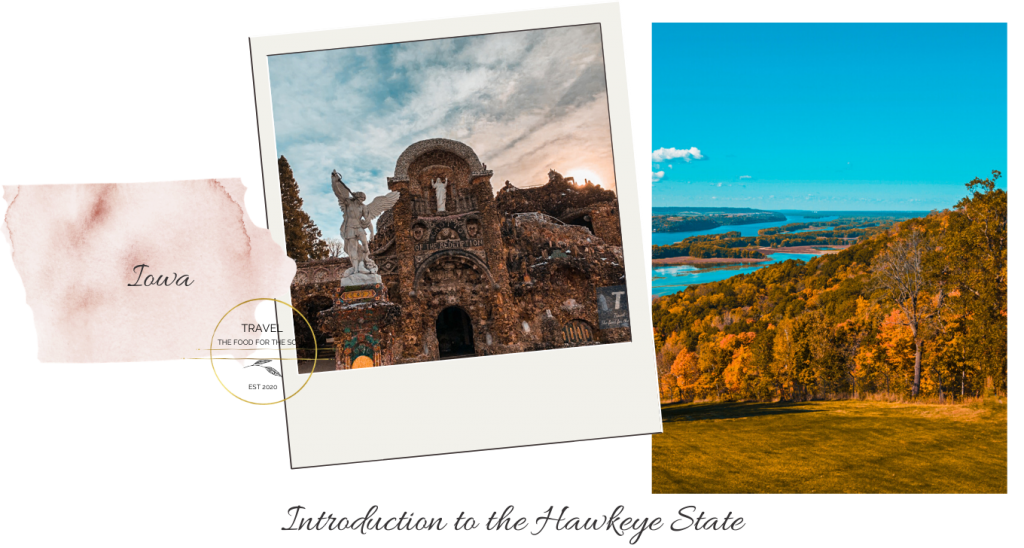 Iowa: While Iowa might not be a prevalent touristy state, it has some amazing and unique places I have ever seen in my life! Here is my Iowa travel guide outlining major Iowa attractions!

To make it easy for you to navigate the content, I have organized my Iowa travel guide into two sections. (1) A brief introduction to Iowa, a little history, some geography, commute, and weather. (2) Major Iowa attractions, if you wish, you can skip the introduction and move on to the next section, Iowa Attractions.

History: Iowa was admitted to the union as the 29th state on Dec. 28, 1846. Iowa was originally a territory of Wisconsin west of the Mississippi River. Iowa got its name from the Iowa River, named by Indians – “Ayuxwa” pronounced as  “Ioway,” which means “one who puts to sleep.” The state got its nickname, the Hawkeye State, as a tribute to chief Black Hawk, leader of the native American Sauk tribe. Iowa is also known as the – The Corn State; 90 percent of the land is devoted to agriculture, and Iowa is the largest producer of corn in the US.

Geography: Iowa is bordered by Minnesota in the north and by Missouri in the south.  Wisconsin and Illinois are on the east, and South Dakota and Nebraska border Iowa on the west. Iowa forms a bridge between the forests of the east and the grasslands of the plains to the west. With its fertile prairies, Iowa is one of the foremost farming states in the US.

Drive: If you live in any of the Midwestern states, you could easily drive to Iowa.

Getting around: I would recommend renting a car in Iowa. However, you would find a few other options – Burlington Trailways, Jefferson Lines, and MegaBus.

Best Places To Visit in Iowa

Grotto of the Redemption

The Grotto is often considered the – Eighth Wonder of the World and often described as a “Miracle in Stone.” The Grotto of the Redemption was added to the National Register of Historic Places in 2001. The Grotto is the largest of all human-made Grottos in the world and is said to have the most precious stones and gems to be found in one location.

The Grotto is made up of nine different grottos which portray different scenes in Christ’s life. The Grotto was built by Father Dobberstein, who became seriously ill with pneumonia, and as he fought for his life, he prayed for his life to the Blessed Virgin Mary, promising to build a shrine in her honor if he lived. The illness passed, and Father Dobberstein kept his promise by making the Grotto of Redemption.

There is a small museum, a gift shop, a campground, and wonderful people ready to help and educate you about the rich history of the Grotto. I was fortunate to meet two very knowledgeable staffs and one of them is a living legend, who actually helped in completing the construction of the Grotto. 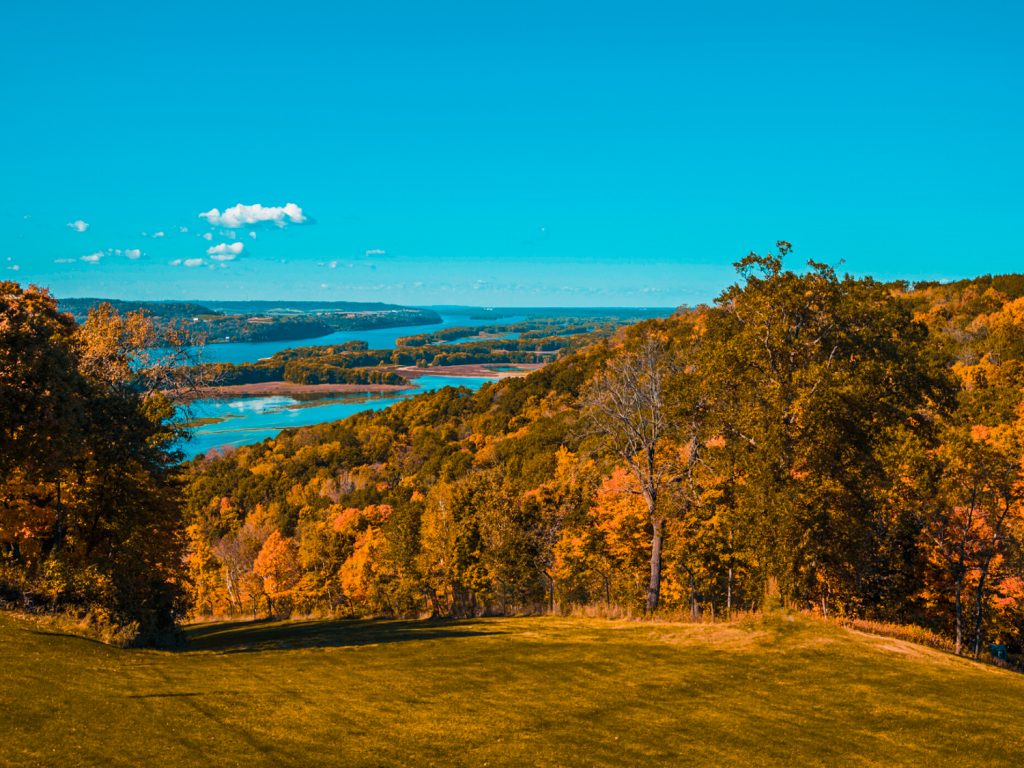 Pikes Peak State Park is a state park in Iowa, featuring a 500-foot bluff overlooking the Upper Mississippi River. It’s said that ancient American Indians of the Woodland Culture use to live in the Pikes Peak area from 800 to 1200 AD. There are two main overlooks – the primary overlook extends out over the 500-foot bluff and one more very close to the primary offering a different perspective. If you have time I would recommend visiting the Bridal Veil Falls, an easy one-mile (round-trip) from the parking lot, Bridal Veil Falls is a small natural waterfall flowing out of limestone rock.

The National Mississippi River Museum and Aquarium is located within the Port of Dubuque, Iowa. It’s a dynamic aquarium with several other attractions, including – wetlands, a boatyard, and several historical exhibits. 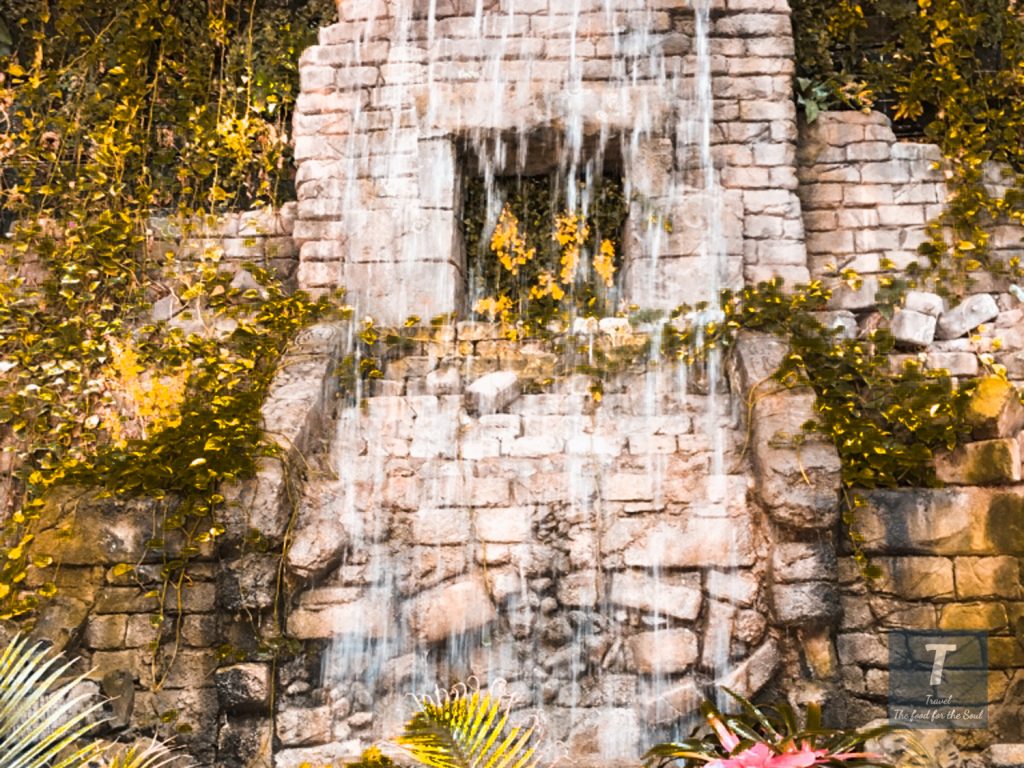 Is a botanical garden located in Des Moines, Iowa, on the east bank of the Des Moines River. The garden offers guided and self-guided tours, educational programs, a Café and has a garden shop. 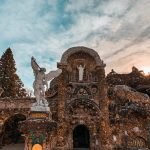 I hope you enjoyed reading the post, The Ultimate Iowa Travel Guide and will find it useful in planning your trip to Iowa. I loved it there in the Grotto Of The Redemption; it’s really a unique experience.