The Ultimate Guide To Sandusky

The Ultimate Guide To Sandusky 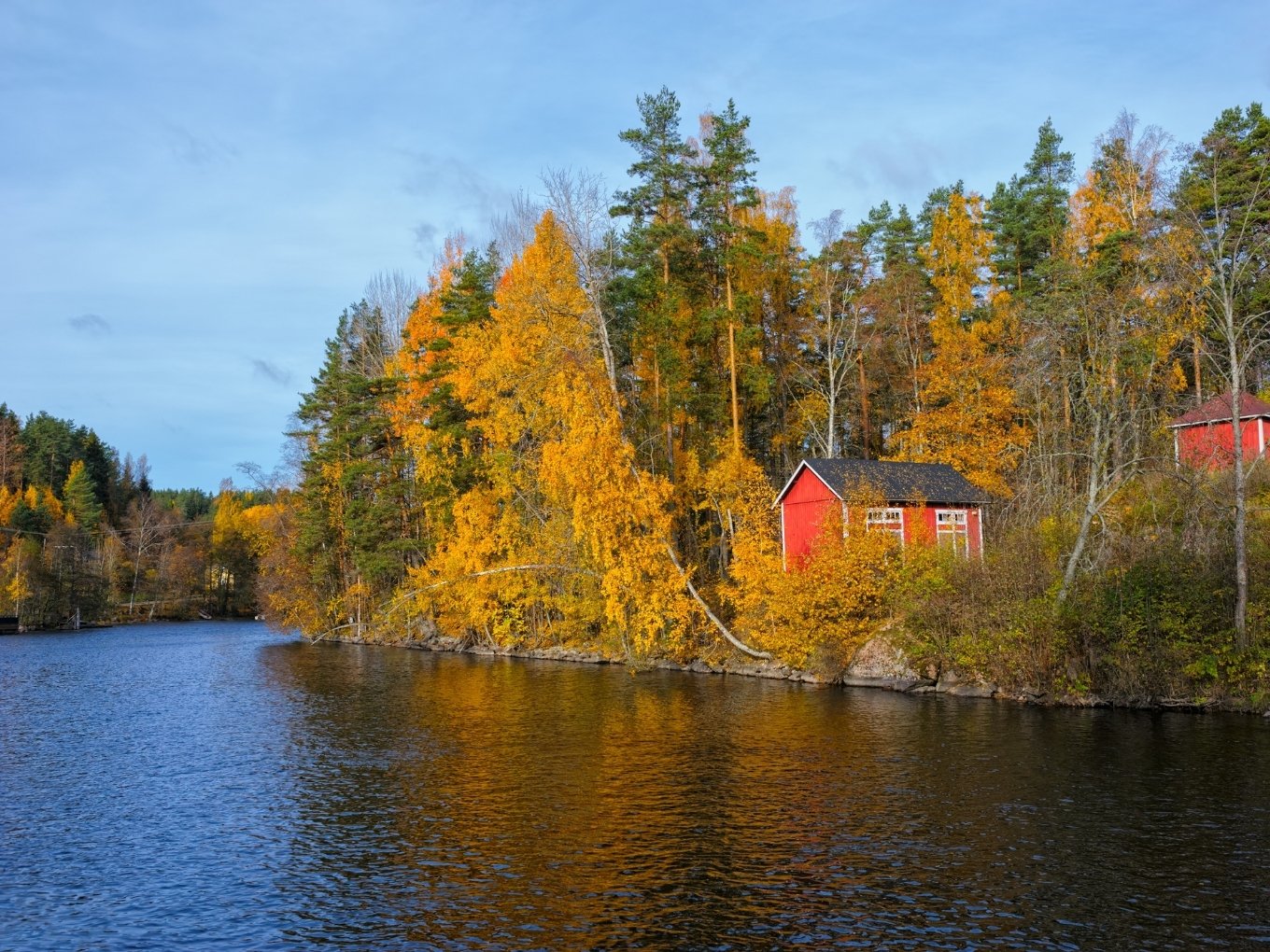 Sandusky’s Cedar Point is one of the most popular amusement parks in the US, and with some of the tallest and fastest thrill rides, Cedar Point is a paradise for thrill-seekers! To add to the fun, Sandusky also features a few fabulous waterparks, including two outdoor water parks – Castaway Bay and Cedar Point Shores, and the Nation’s largest indoor waterpark, Kalahari Resort. However, if you’re not into amusement parks and rides, Sandusky still has a ton of other attractions, including a charming waterfront, a historic downtown, a few extraordinary museums, and two of Ohio’s popular island destinations – Put-In-Bay & Kelleys Island!

Sandusky, located in northern Ohio along the southwest shore of Lake Erie, is a small quaint town with vibrant boating and fishing neighborhoods. Sandusky, once home to the Native Americans, soon became an important shipping port in the midwest due to its proximity to Sandusky Bay. However, the construction of the Lake Erie railroad led to significant industrialization in the city and also brought in tourists to Cedar Point, then just a peninsula in northern Ohio offering bathhouses and picnic areas, which is now one of the Nation’s most sought-after amusement parks!

Undeniably, Cedar Point and the several water parks are the town’s main draws, but you shouldn’t miss the downtown and the two great Ohio islands on a trip to Sandusky!

To many, Sandusky means amusement parks, and for good reasons, Cedar Point is an ever-evolving theme park with several great rides and entertainment options being added each year! No matter what time of the year, you could enjoy water rides and wave pools in an expansive climate-controlled waterpark at Kalahari Resort. However, when visiting Sandusky, you must go beyond the theme parks and explore the city’s historic downtown and spend a day or two exploring the two great island villages of Ohio – Put-In-Bay & Kelleys Island!

Planning Your Trip To Sandusky 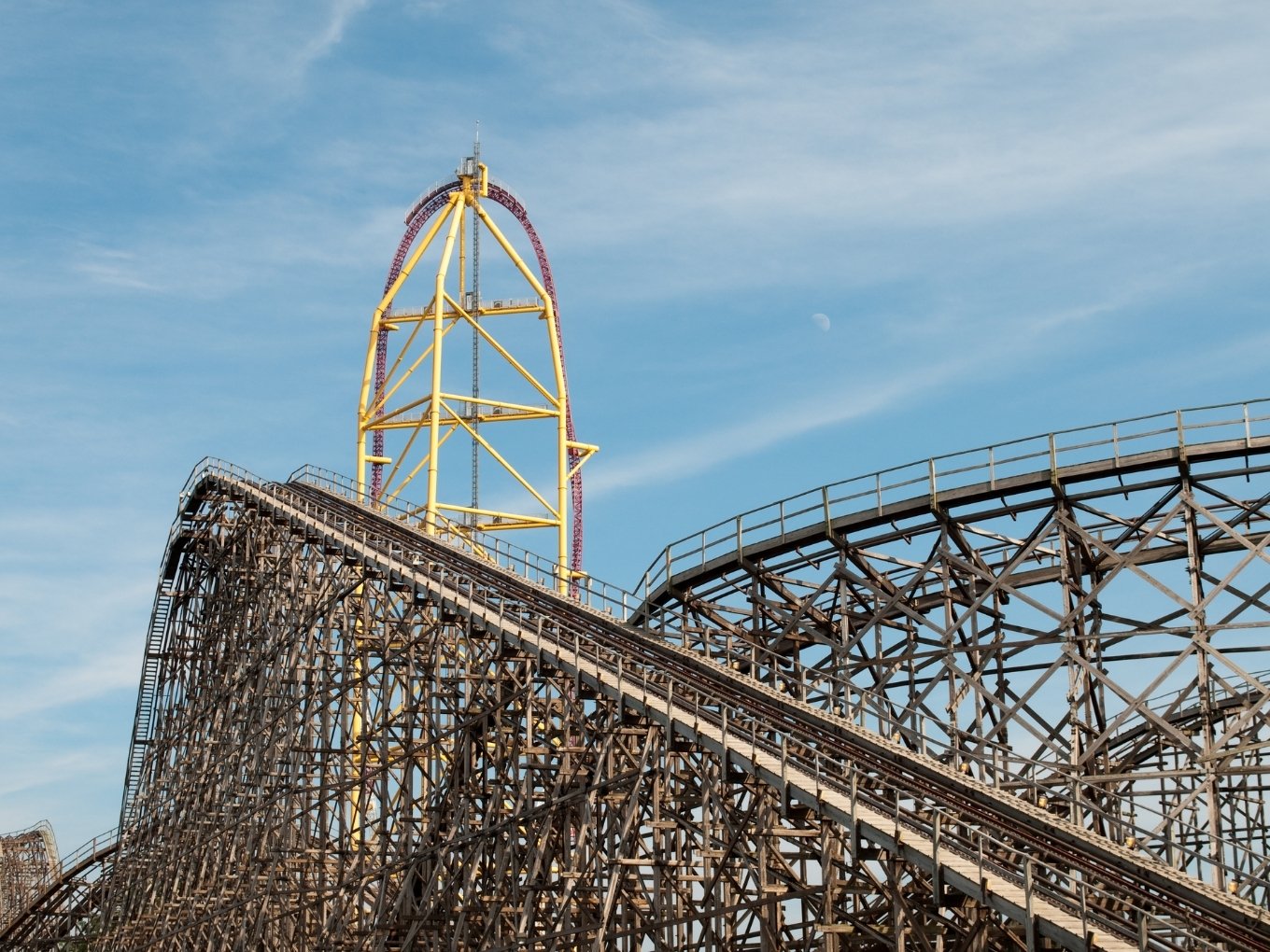 Traveling during the summer and fall months, flying into Cleveland and then driving to Sandusky, and staying close to the attraction you plan to visit is the best way to get the most out of your trip to Sandusky!

Best Time To Visit Sandusky: Summers and fall with warm temperatures are the best time for sightseeing and outdoor activities in Sandusky. Winter and early spring are pretty cold and snowy in Sandusky and not the best time for outdoor activities as most amusement parks are closed except for the indoor waterpark at Kalahari Resort. However, late spring has more pleasant temperatures and is a great time to beat the crowd at the popular attractions in Sandusky.

Time Required At Sandusky: With several amusement parks and historic downtown, I recommend spending a minimum of two days just to explore Sandusky’s major attractions located within the city – Cedar Point, water parks, and downtown Sandusky. However, you would need additional time if you’re planning to visit Put-In-Bay and Kelleys Island, a minimum of one day at each island, which I highly recommend visiting on a trip to Sandusky!

Getting To Sandusky: The best and most comfortable way to get to Columbus is by flying into Cleveland International Airport, located 56 miles east of Sandusky, renting a car, and then driving to Sandusky. Alternatively, you could also take an Amtrak train or a Greyhound bus to Sandusky.

Parking & Transportation In Sandusky: Most hotels and attractions in Sandusky have ample parking, and there are quite a few public parking lots in the downtown area. Though STS, Sandusky Transit System, offers year-round bus services in Sandusky, it’s a good idea to rent a car when visiting Sandusky.

Lodging & Dining In Sandusky: Sandusky, a famous amusement park destination of the midwest, offers quite a few lodging options, located close to the downtown and near the popular parks. The amusement and the water parks in Sandusky offer quite a few great dining options, but if you’re looking beyond that, you will find many charming local eateries in the downtown area. I have reviewed the lodging and dining options in Sandusky in detail in the later section of this post.

Things To Do In Sandusky 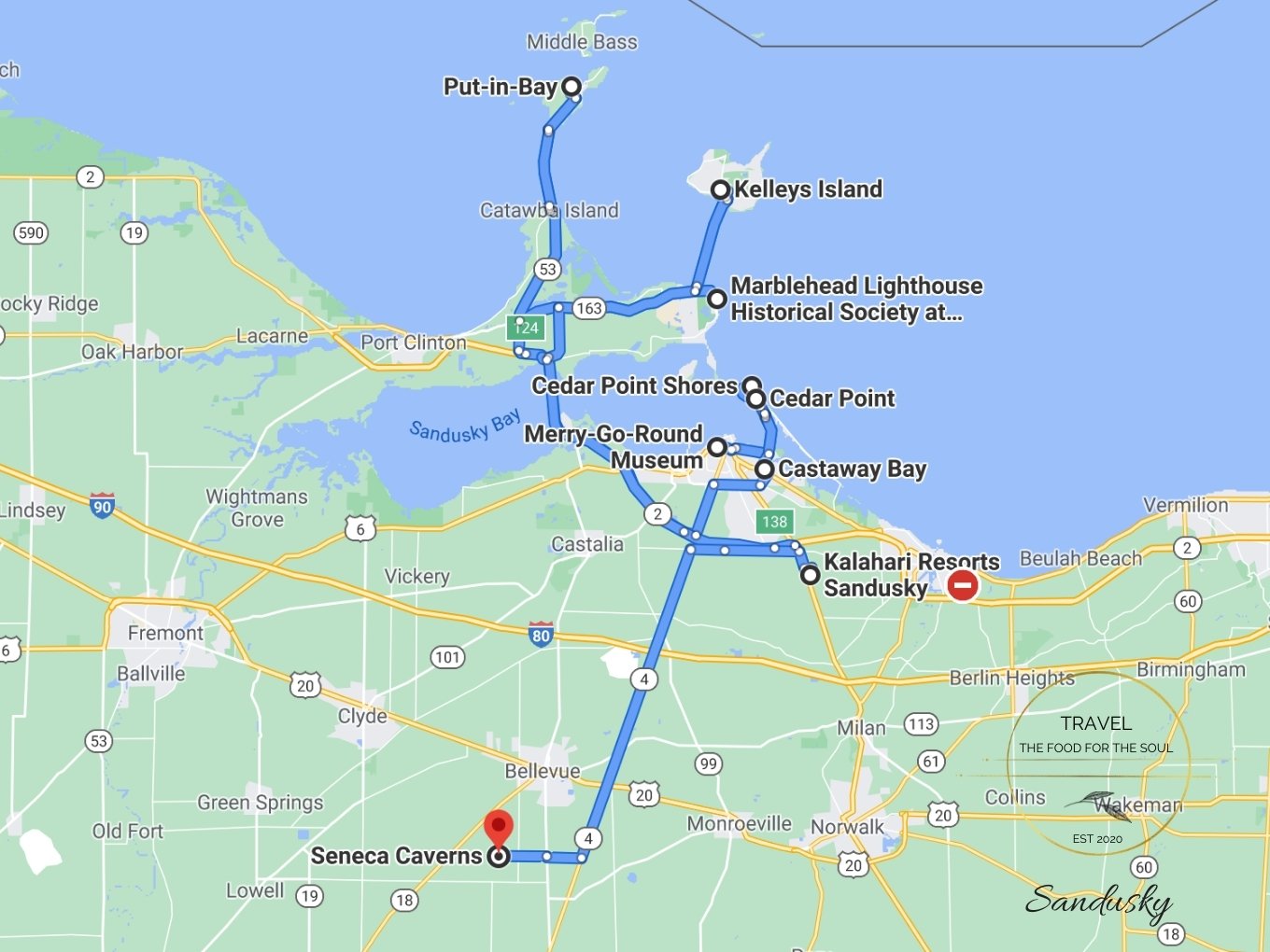 Most of the attractions within the city limit of Sandusky are located close to the downtown area and are easily accessible by car or public transportation. However, other popular Ohio attractions, including Put-In-Bay, Kelleys Island, Marblehead Lighthouse, and Seneca Caverns, are not within Sandusky city limits and require a bit of driving and may involve using ferry services, but are definitely worth visiting on a trip to Sandusky.

Here’re the must-see places on a trip to Sandusky, starting with the downtown attractions! 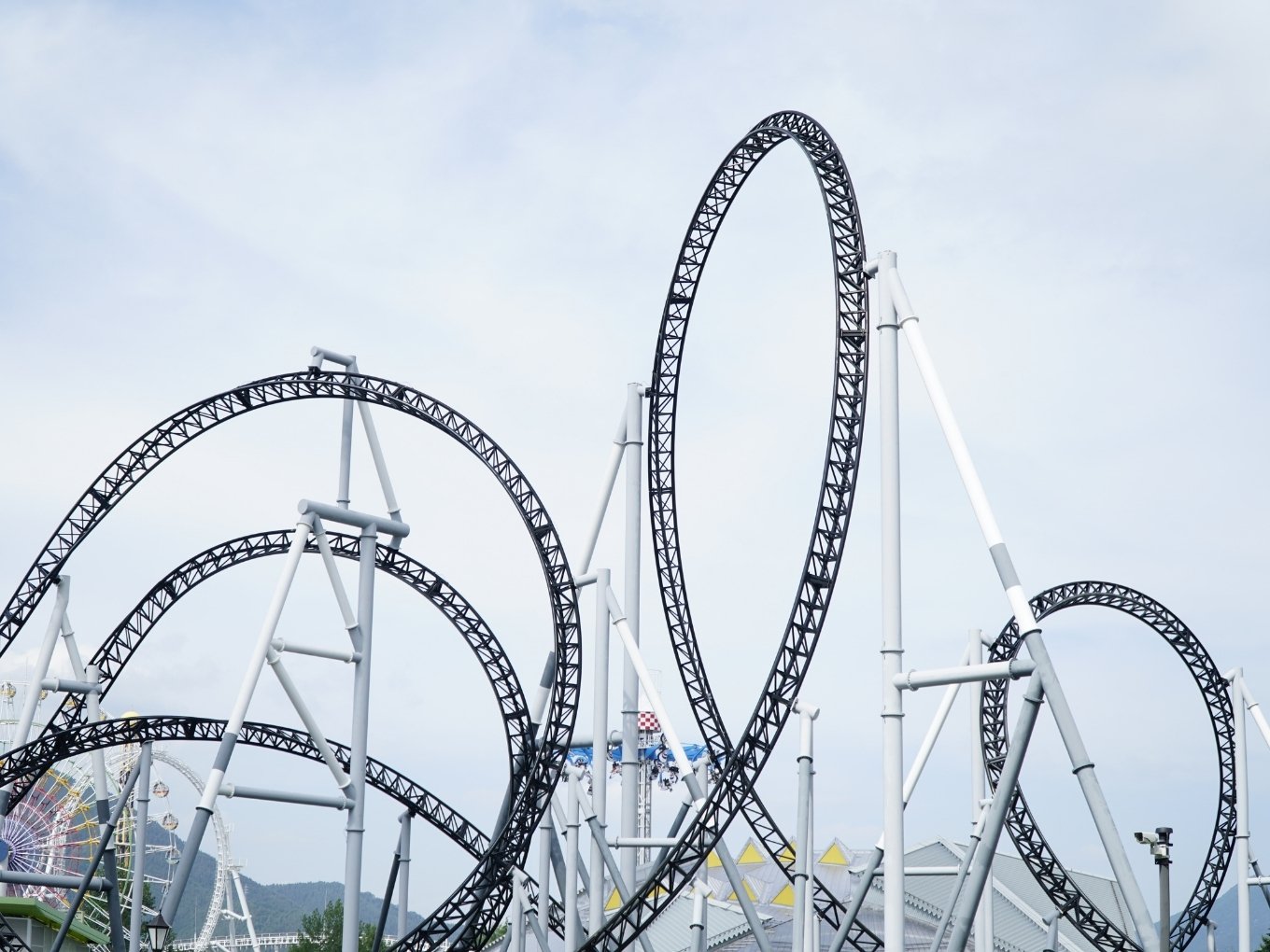 Cedar Point, one of the oldest and most sought-after amusement parks in the midwest, features world-class roller coasters, family-friendly rides, shows, and Cedar Point Shores, a water park adjacent to the amusement park. However, given its location on the shore of Lake Erie and the cold winters in northern Ohio, the park is open only May through October. 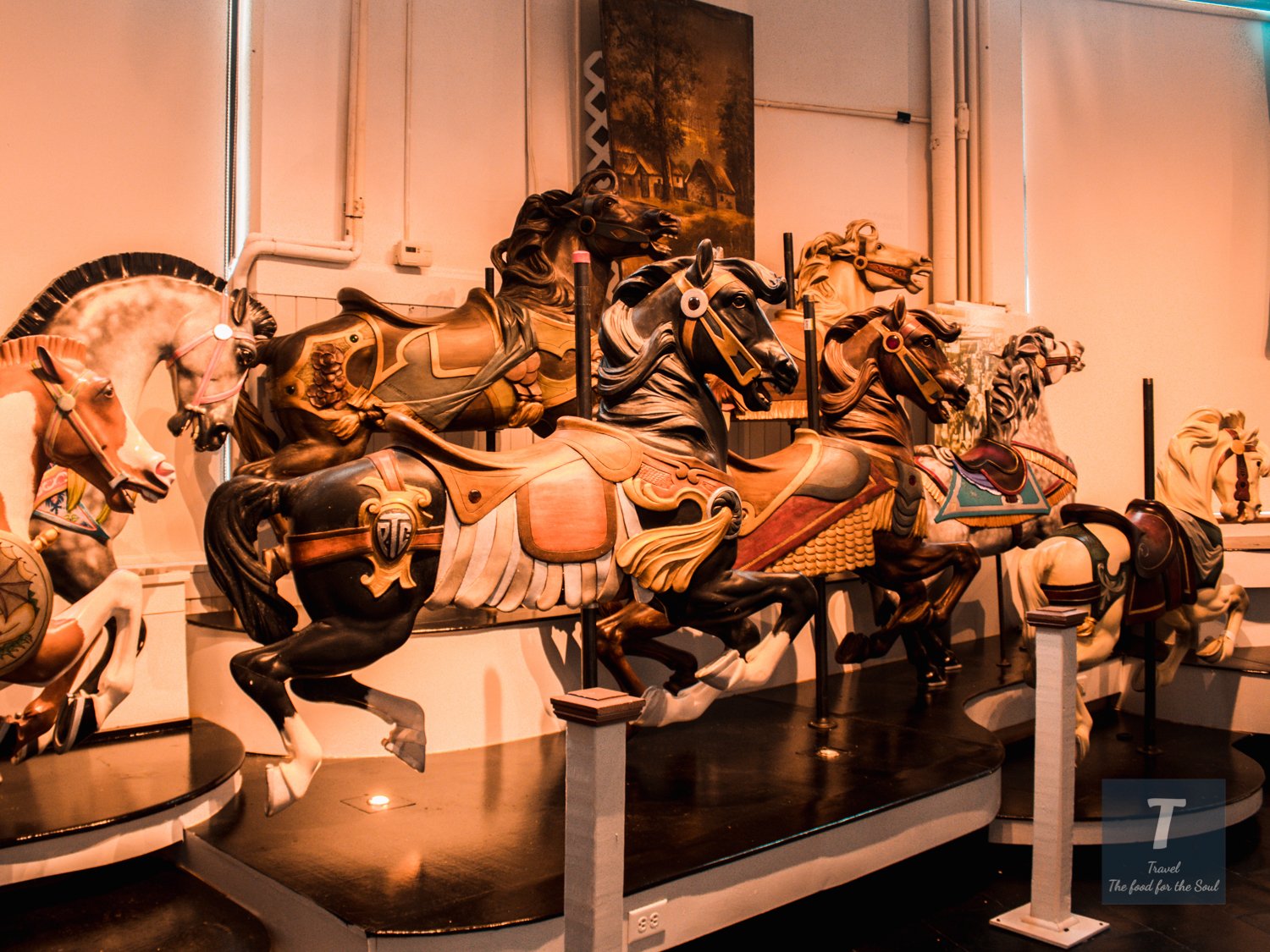 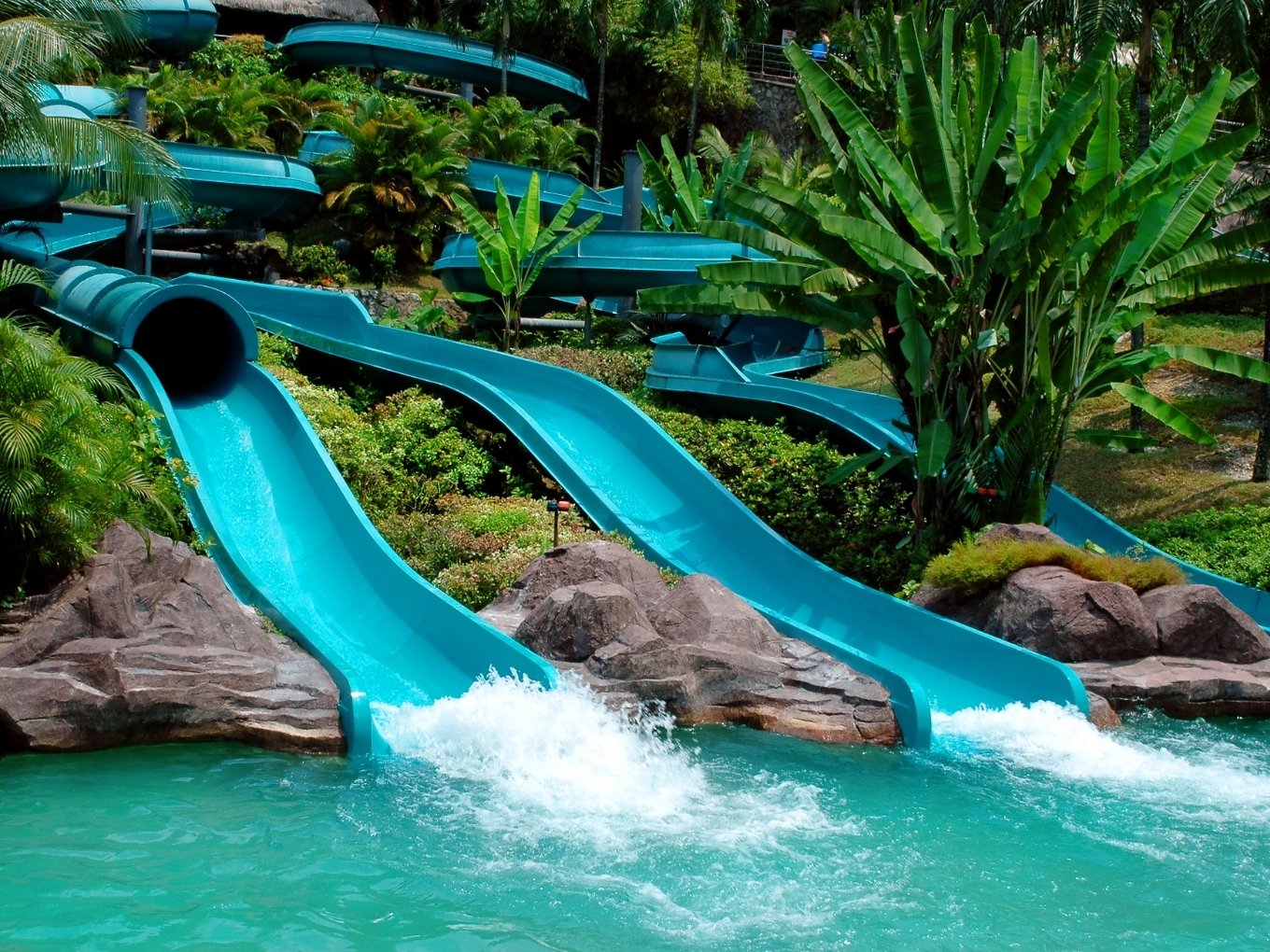 Kalahari Resort, the Nation’s largest indoor water park and one of the most sought-after resorts in the midwest, is an African-themed resort featuring indoor & outdoor water parks, a mini golf course, bowling, laser tag, spa, and a few exceptional dining options, and is located approximately 6 miles from downtown Sandusky. 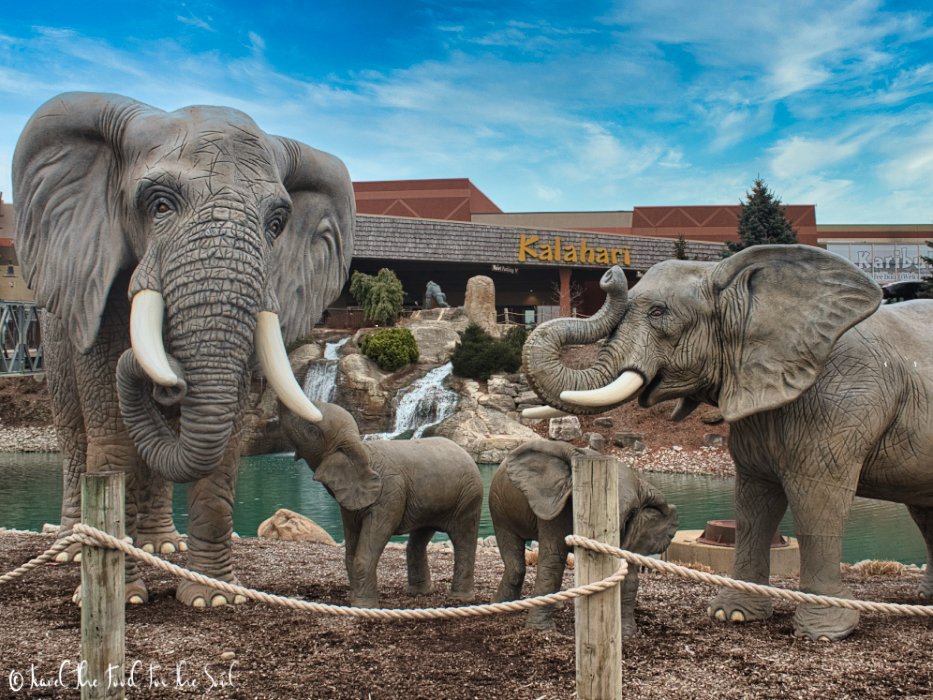 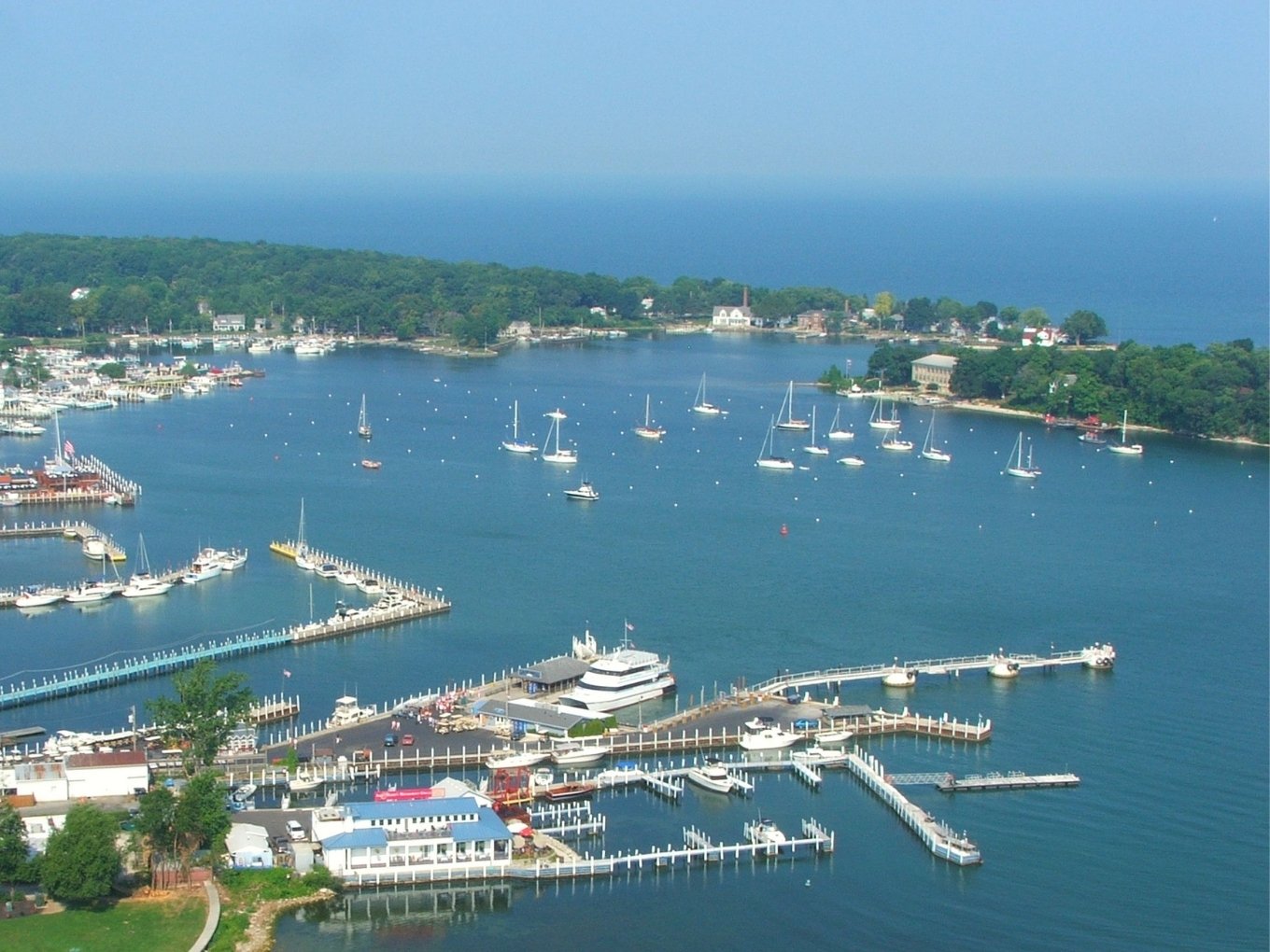 Put-in-Bay, a small island resort on South Bass Island in Lake Erie, featuring a charming downtown, historical landmarks, a cave, museums, and several other fun activities, is one of the best places to visit in Ohio! The island can be reached via ferry services offered by Jet Express & Miller Ferry, and once on the island, you could rent a golf cart to explore the island. 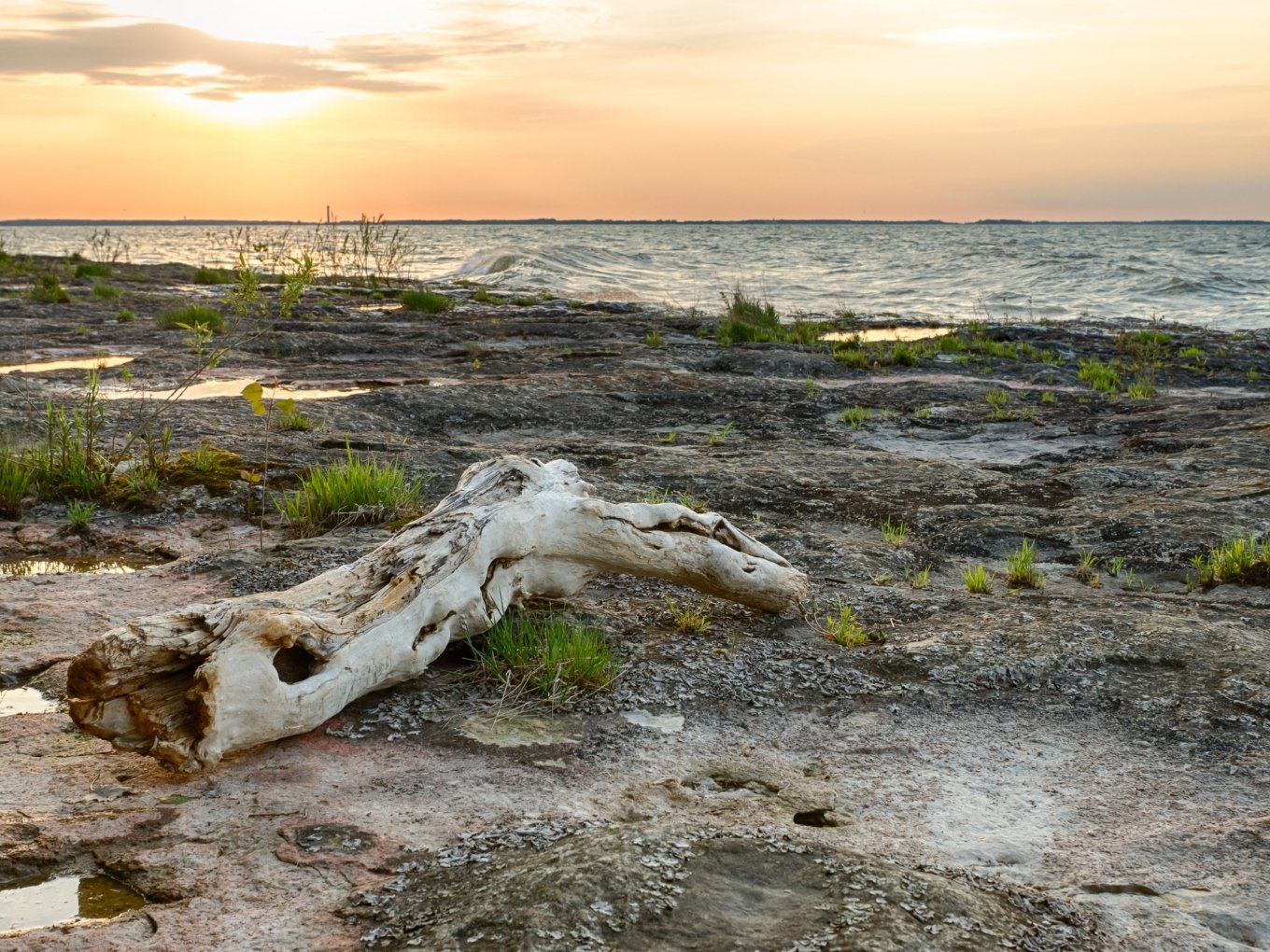 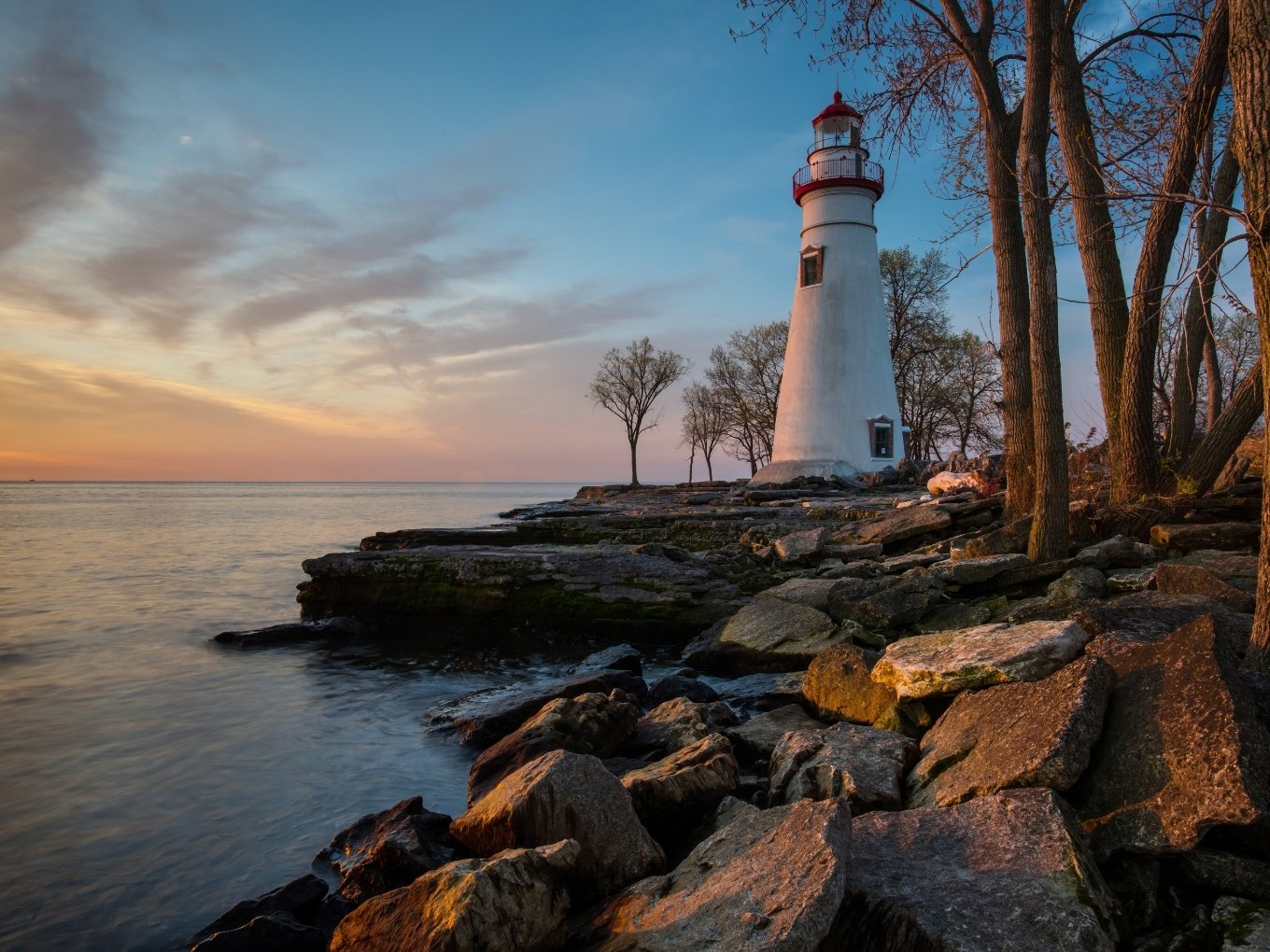 Marblehead Lighthouse, located about 20 miles north of downtown Sandusky in Marblehead, is one of the oldest and continuously operating lighthouses on the shores of Lake Erie, featuring spectacular views of Lake Erie and Sandusky Bay, several picnic areas, a museum, gift shop, and tours of the lighthouse in summer and fall.

Seneca Caverns, about 20 miles south of downtown Sandusky, is a National Landmark, and since its discovery in 1872, the cave’s natural setting, including passages & trails, was never altered and retained close to its original state. The cave is accessible via guided tours in summer and fall, but it’s a strenuous hike and involves steep climbs & narrow passages. 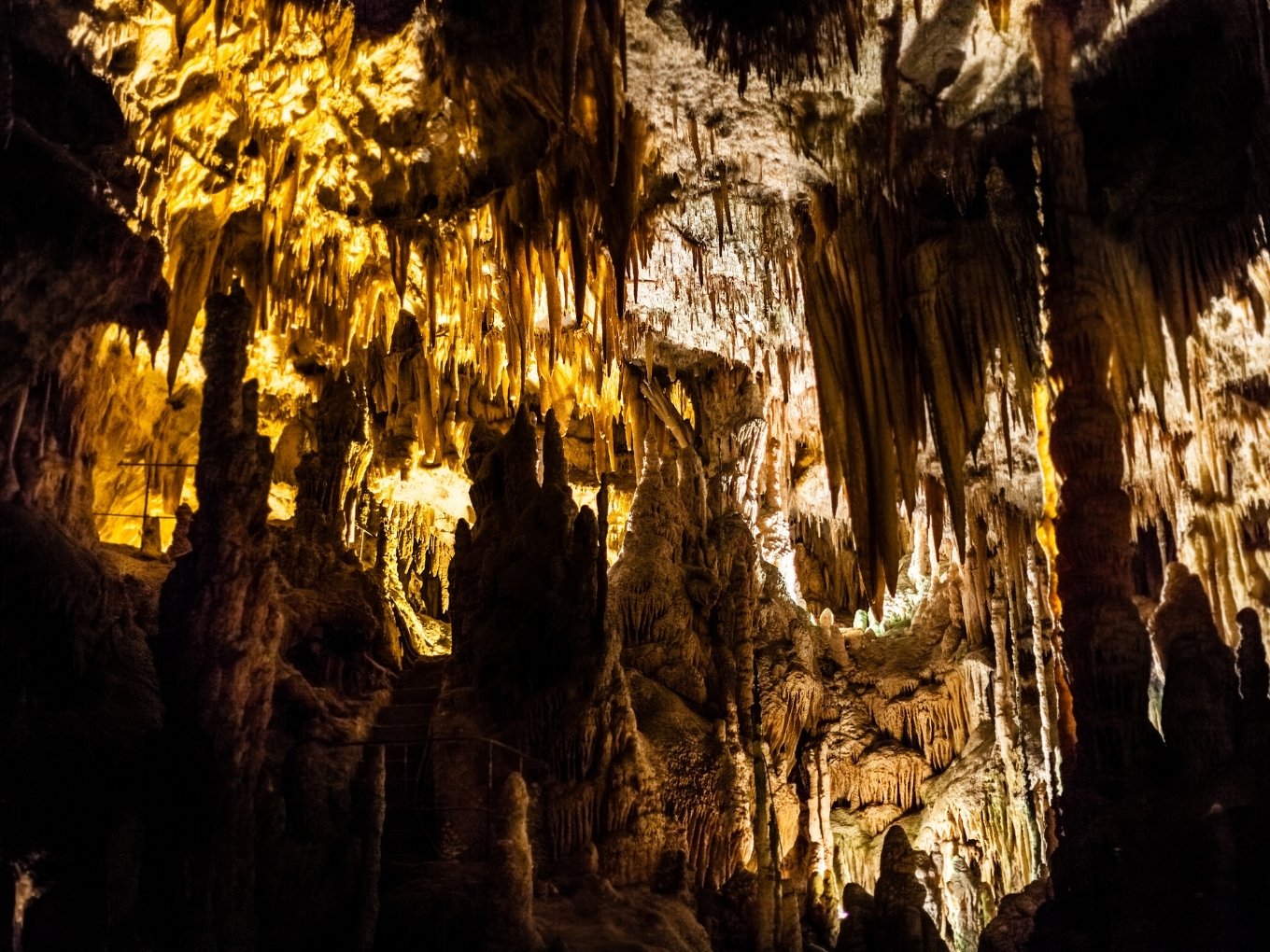 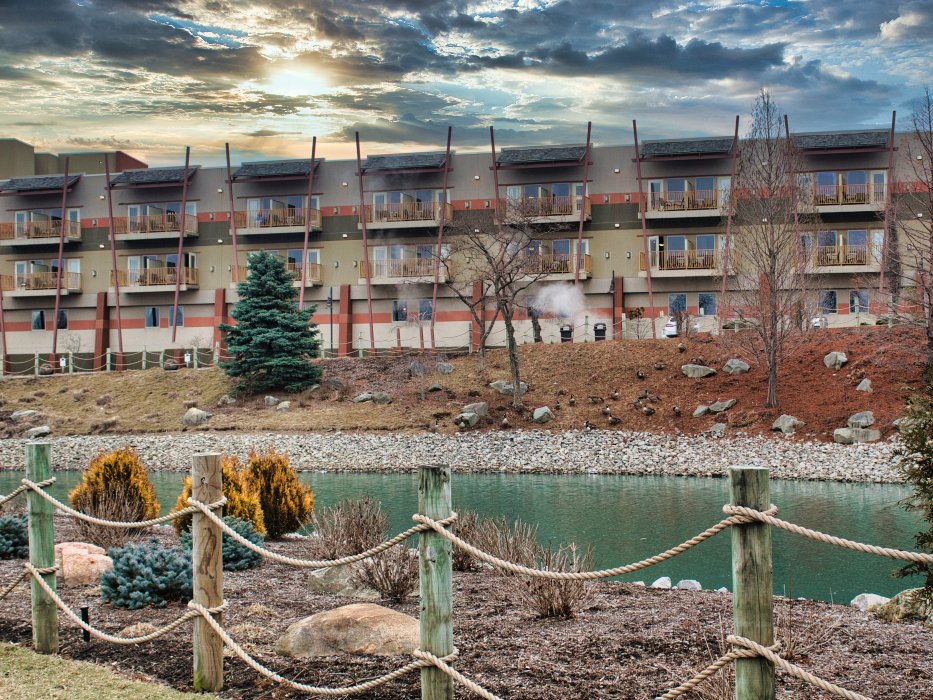 Stay in one of the resorts in Sandusky or spend a night in Put-in-Bay, South Bass Island, or Kelleys Island!

Hotels In Sandusky: Sandusky, being a popular resort and amusement park destination, features various lodging options, especially in the downtown area and close to the amusement parks. The island destinations – Put-In-Bay & Kelleys Island also feature several lodging options for overnight stays. Here’re are my top picks for hotels and resorts in Sandusky –

Restaurants In Sandusky: There’re several dining options in Sandusky, with each amusement / water park offering a multitude of cafes and restaurants. However, if you want to go beyond the eateries in the parks, head to the downtown area, where you will find several local eateries, including Berardi’s Family Kitchen serving great American & Italian food, great pizza at Brick Oven Bistro, authentic Mexican food at BARRA, and Dockside Cafe for comfort food with incredible bay views. 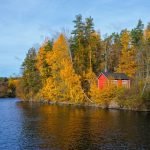 I hope you enjoyed reading the post, The Ultimate Guide To Sandusky, and I hope this will help you plan your trip to Sandusky. You can find other Ohio attractions in my Ohio Travel Guide.