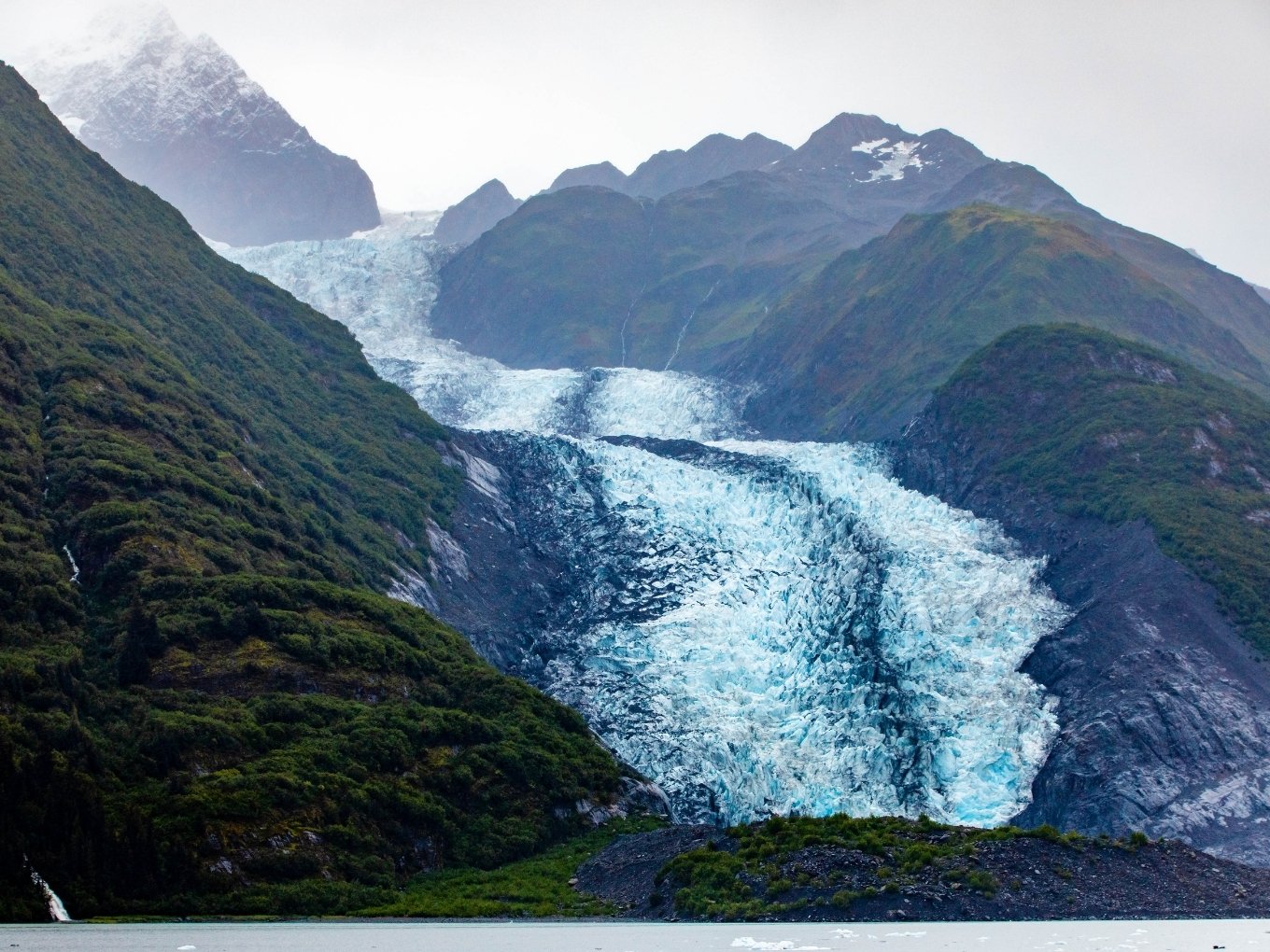 Prince William Sound, an ocean inlet on the southern coast of Alaska, is home to a fascinating landscape comprised of glaciers, waterfalls, sea rocks, and wildlife!

Prince William Sound, a calm and sheltered ocean inlet located on the southern coast of Alaska, is detached from the Gulf of Alaska by several barrier islands. The Prince William Sound is popularly known for its several glaciers as it’s home to more than a hundred glaciers, of which approximately 17 are tidewater glaciers – glaciers that start in the mountain and end in the ocean and often calve, producing chunks of floating icebergs. Prince William Sound is also home to several fjords, islands, spectacular waterfalls, towering sea rocks, and a variety of wildlife, making it a true icon of must-see nature!

Prince William Sound, located about 60 miles southeast of Anchorage, was explored by many British and Spanish explorers, who initially called it the “Sandwich Sound” but later renamed it to “Prince William Sound,” to honor Prince William Henry, son of George III, the king of Great Britain (1760 – 1801). The majority of the land area surrounding Prince William Sound is part of the Chugach National Forest, and the native Chugach people made their living by fishing, fur trading, mining, and logging. The Sound and the coastal villages suffered two major catastrophic events – the Good Friday earthquake & tsunami in 1964 and the Exxon Valdez oil spill in 1989, impacting wildlife in the Sound. However, the Sound and the coastal towns have made a significant recovery since then and are now open for tourism!

Take a cruise, ferry, kayak, or fly over the glaciers and land on an ice field on a glacier landing tour of Prince William Sound! 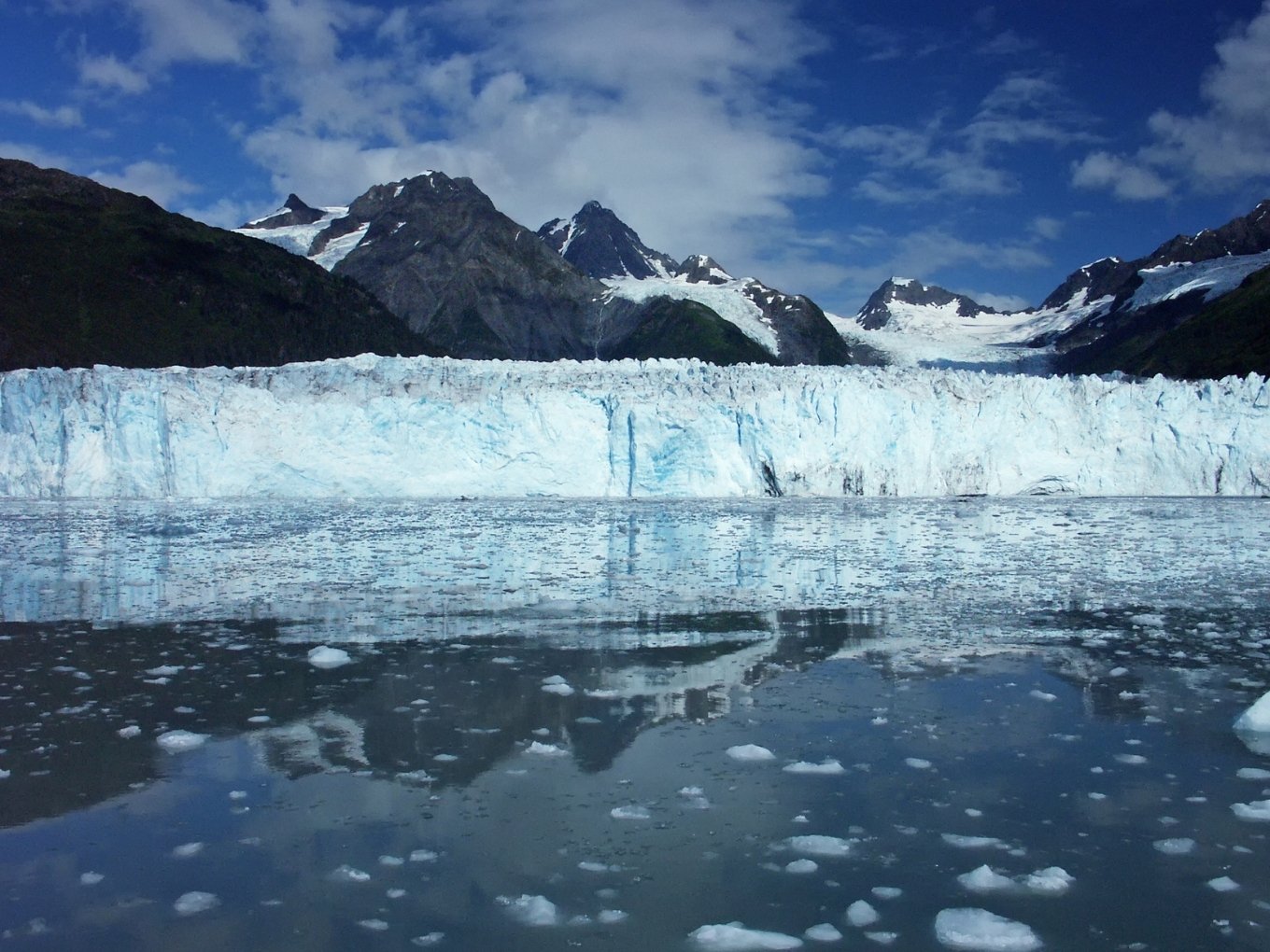 Visiting outside the brutal winter months, flying into Anchorage and then driving or taking a train to Whittier, and taking one of the day cruises is the best way to explore Prince William Sound!

Best Time To Visit Prince William Sound: Winters are pretty long and brutal in Alaska, and unless you’re going skiing or snowmobiling, you should avoid winter and spring for sightseeing and outdoor activities in Prince William Sound or anywhere in Alaska. Summer, particularly June through August, is the peak season in Alaska, with most cruises and parks open for the season. However, summer is also the busiest season, and a summer trip to Alaska or Prince William Sound should be planned ahead of time. If you don’t mind slightly cooler temperatures, visiting during the shoulder months, May & September, is a great way to beat the crowd at Prince William Sound.

Things To Do In Prince William Sound 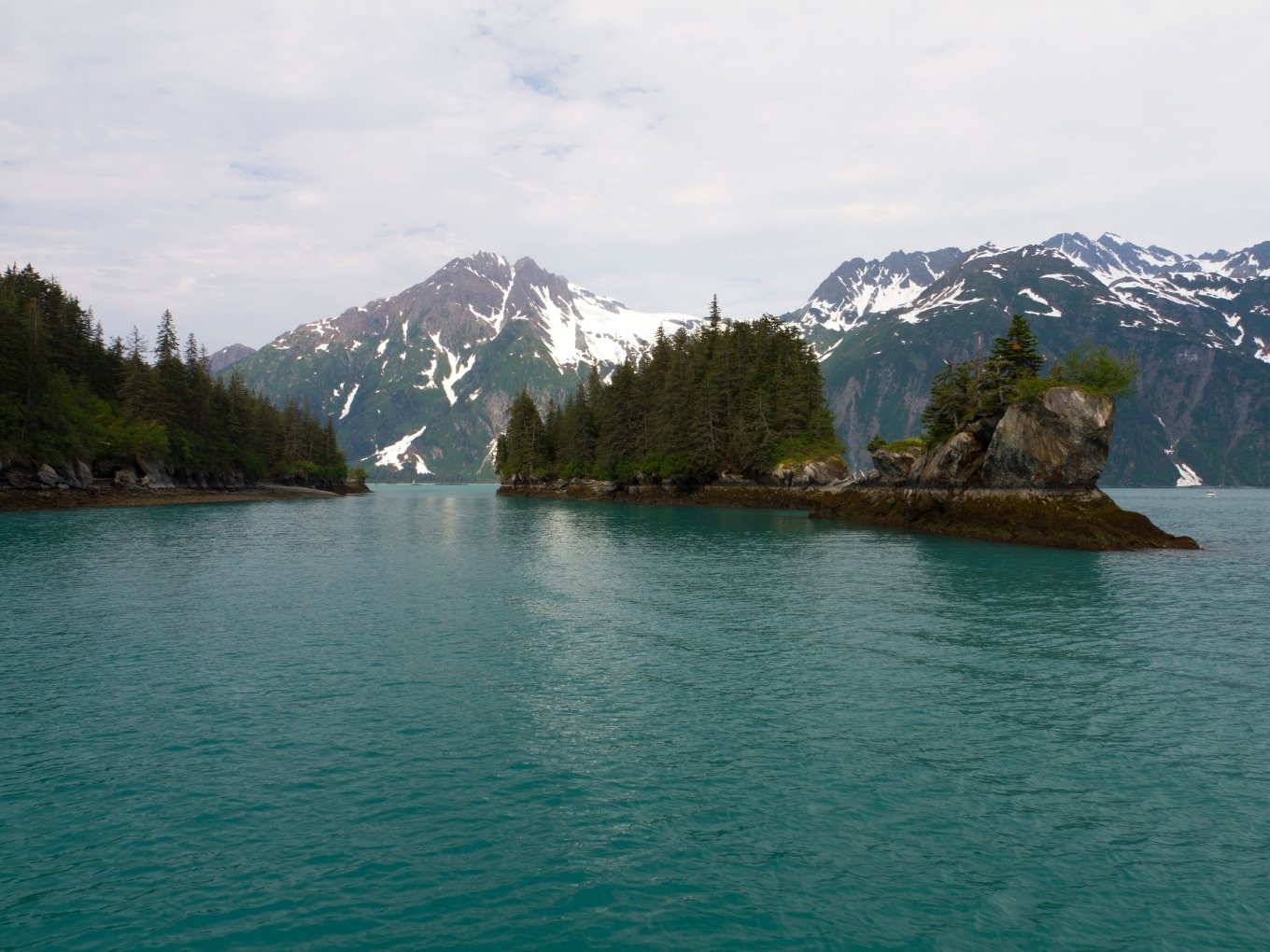 While the day cruises are the most popular & comfortable way to explore Prince William Sound, if you’re more adventurous, you could kayak the waters of the Sound or land on the ice fields on a helicopter tour of the Sound!

Prince William Sound Day Cruise: The sightseeing cruises departing from Whittier and Valdez are the most popular way to explore Prince William Sound as they feature spectacular views of the deep fjord, waterfalls, wildlife and takes you up close to a couple of glaciers, all in the comfort of heated decks and ample open viewing space on the bow, aft and promenade decks on both sides of the ship. The sightseeing day cruise lasts about 4 hours and does include a freshly prepared meal.

While we used Phillips Cruises & Tours and have firsthand experience of their Glacier Quest Cruise, the other tour companies also follow an almost similar route and offer a similar experience. The Glacier Quest Cruise offered by Philips Cruises departs from Whittier and takes you into Blackstone Bay, located south of Whittier, featuring dramatic views of several tidewater and alpine glaciers, rock formations, a brief stop at a shipwreck site in Shotgun Cove, a couple of stops close to the glaciers with enough time to admire and photograph the glaciers, and wildlife, including sea lions, whales, and harbor seals. Here’s the list of companies that offer sightseeing cruises of Prince William Sound –

Prince William Sound Kayak Tours: if you’re up for an adventure, there’s nothing better than paddling the waters of Prince William Sound and exploring some of the pristine areas of the Sound, including rugged coastlines, rock formations, gorgeous waterfalls, hidden coves, glaciers, and float along with the sea lions and harbor seals. However, navigating the Sound requires proper gear and knowledge of the area, and I highly recommend using one of the guided kayak tours offered by Alaska Sea Kayakers. Alaska Sea Kayakers offers four primary kayak tours, originating from Whittier 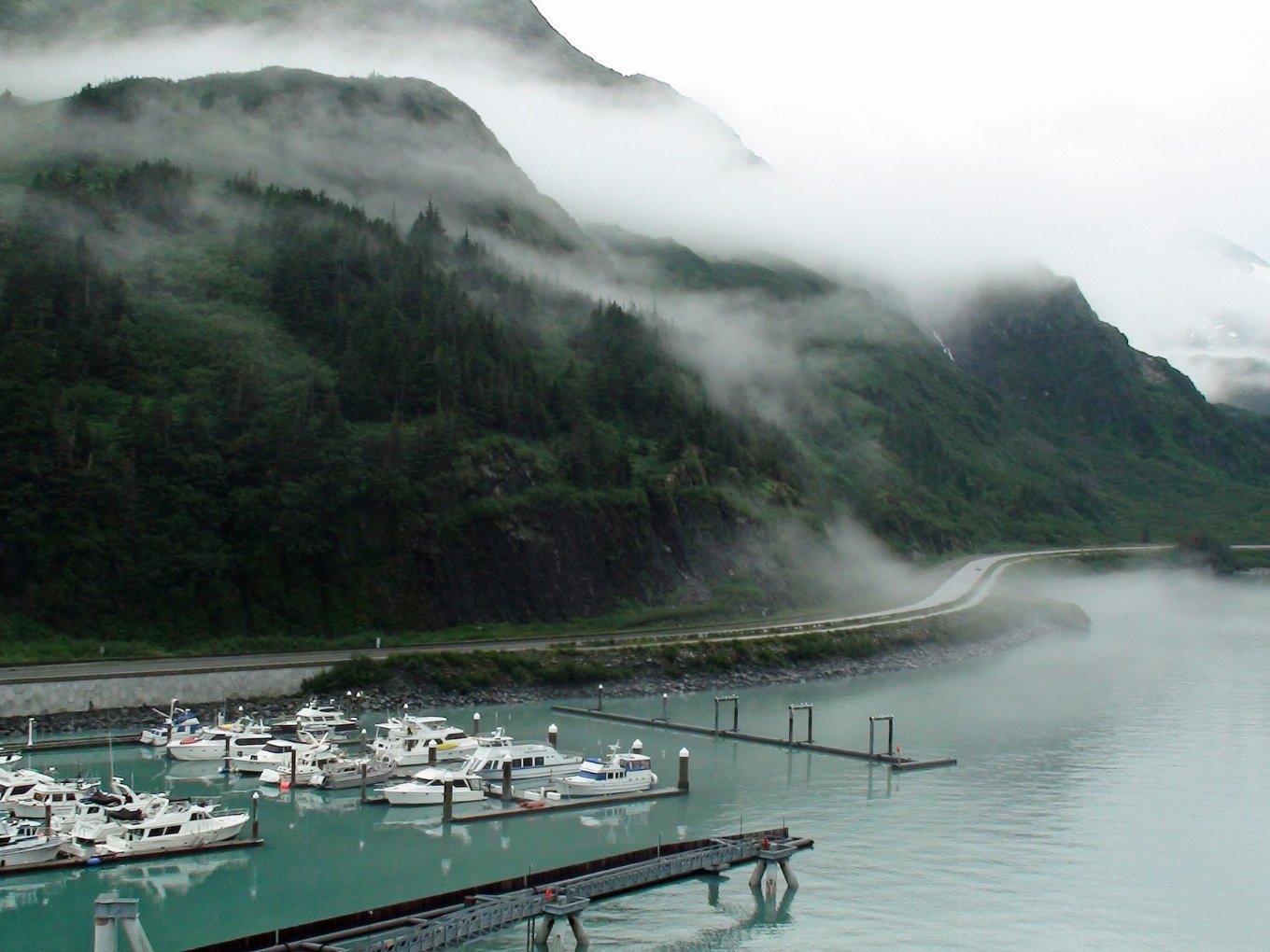 Reach Whittier via a scenic drive or train ride, enjoy great seafood served onboard the sightseeing cruises, and stay overnight at Seward or drive back to Anchorage!

Suggested Itinerary: Most people board the day cruises to Prince William Sound from Whittier, approximately 60 miles from Anchorage, and can be reached by car or train. The seasonal train ride to Whittier is a great experience, but you would need to stick to the timing, and it involves a bit of walking to get to the cruise terminal from the train station. The drive to Whittier is very picturesque and my preferred way to get to Whittier, as you could make brief stops along the way. However, on the drive to Whittier, you will be crossing the Anton Anderson Memorial Tunnel, the longest tunnel in North Amera shared by rail and cars/automobiles, and it requires a little bit of planning as the tunnel is open only during certain times. Here’s a suggested Suggested Itinerary –

Restaurants Near Prince William Sound: Most of the sightseeing day cruises of Prince William Sound last about 4 – 5 hours and include freshly prepared meals served on board along with concessions serving beverages and snacks. However, the dining options in the town of Whittier are limited to a handful of local eateries – Wild Catch Cafe and Inn At Whittier, located right next to the Phillips Cruises & Tours cruise terminal. If you’re looking for more dining options, your best options are in the town of Anchorage or Seward. 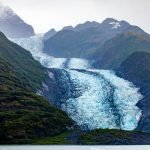