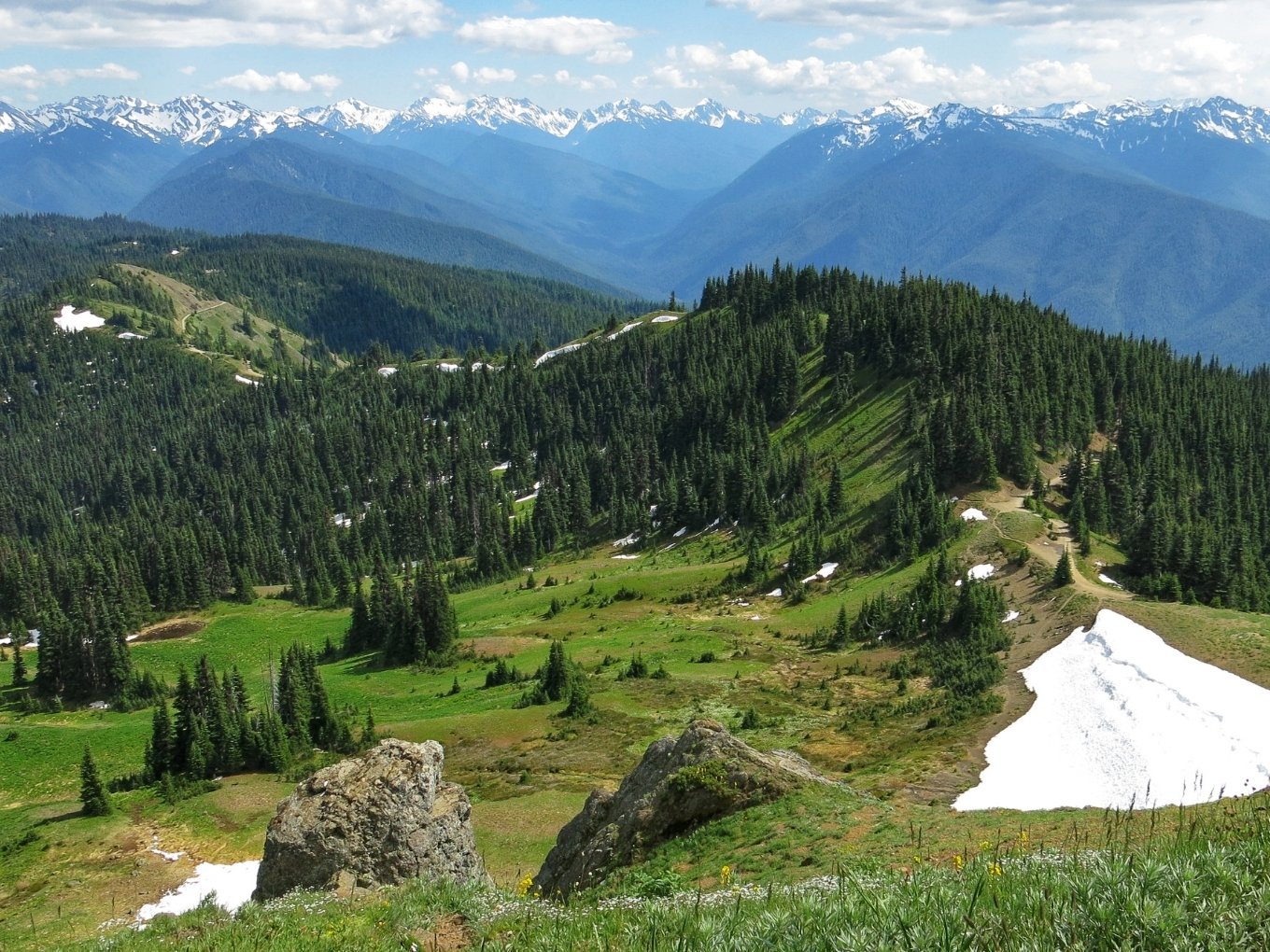 Olympic National Park , one of the planet's most diverse ecosystems!

Located on the extreme northwest corner of the contiguous US lies an extremely diverse array of natural landscapes, comprising of impenetrable temperate rainforests, towering snow-capped mountain peaks, and a gorgeous coastline!

Located in the Olympic Peninsula in the northwest part of Washington, about 110 miles west of Seattle, Olympic National Park is enormous, measuring about a million acres. Once home to several indigenous tribes, Olympic National Park also has several archeological sites throughout the Park, preserving the area’s rich human history. Later in the year 1909, the area was first designated as a National Monument, and then in the year 1938, it was redesignated as a National Park.

Olympic National Park preserves a diverse ecosystem and rich cultural & human history associated with the area and is a designated International Biosphere Reserve and a World Heritage Site!

Olympic National Park is open year-round, but the weather dramatically varies with the varying altitude and geography of the Park. The coastal areas are cold and wet but still accessible during winter, but the alpine regions receive a good amount of snowfall, and so a few roads and sections in the Park are closed during the winter months. Summers are dry and pleasant for outdoor recreational activities, winters are wet and slow, but the Hurricane Ridge area of the Park is bustling with several snow sports during the winter months. 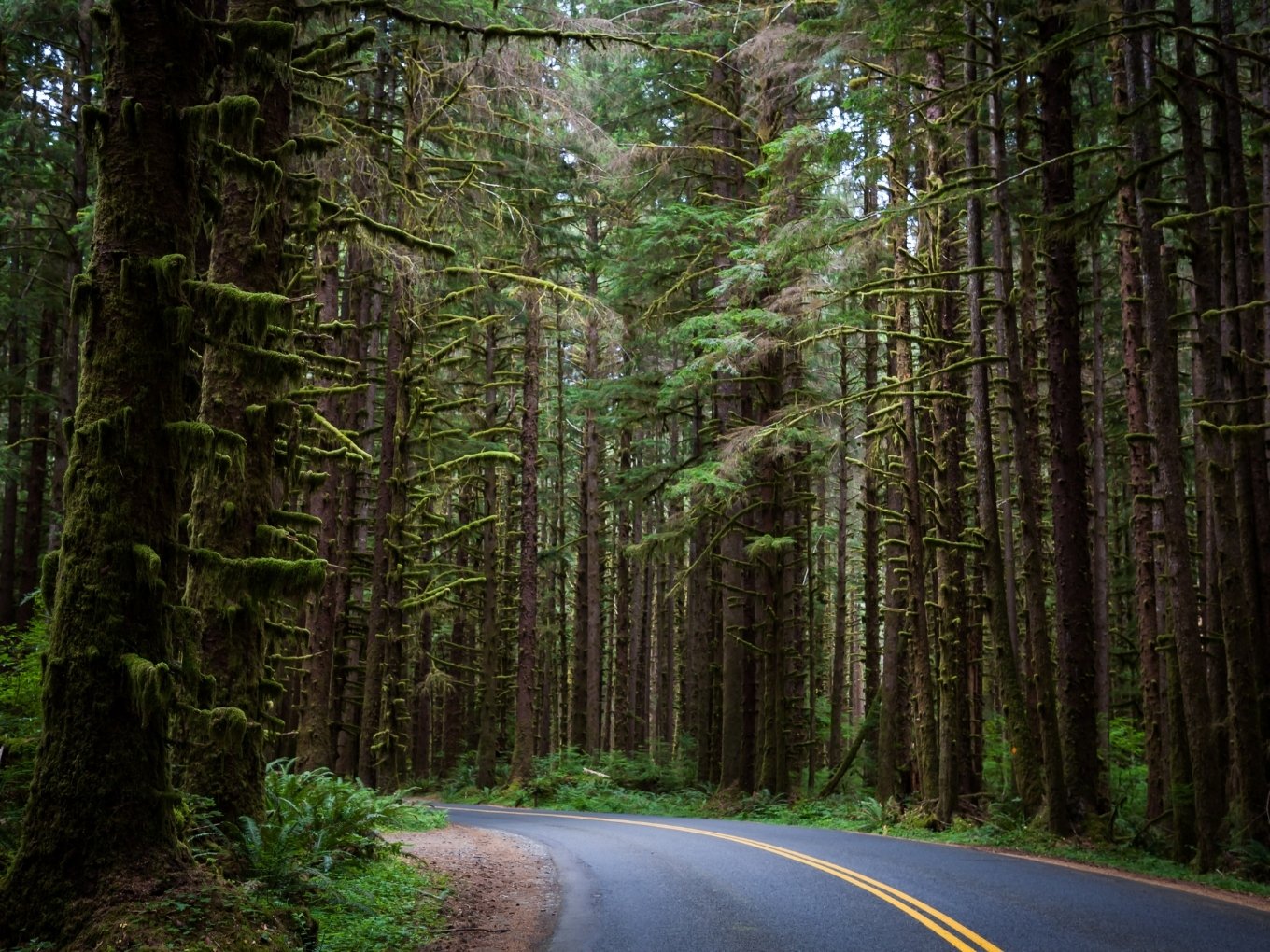 Olympic National Park is open year-round, with summer being the best time for sightseeing, hiking, and camping, whereas winters are cold and wet, with few of the sections & roads are closed for the season.

Best Time To Visit Olympic National Park: The weather in Olympic National Park varies significantly between the lowland and the alpine regions. The coastal area, including the several beaches along the Pacific Coast, remains accessible year-round but can get cold and wet. The rainforests receive a lot of rainfall and can be very damp and muddy during the winter months. The alpine region of the Park gets a good amount of snowfall, and some of the roads and trails are closed in winter. However, the Hurricane Ridge section offers several winter recreational opportunities and is the main draw to the Park during the winter months. So, if you’re planning to spend time outdoors, sightseeing and hiking, I would recommend going to Olympic National Park between July and September.

Olympic National Park Operating Hours & Seasons: The Park is open all year-round and 24 hours a day. However, some of the park facilities, including the visitor centers, park entrances, and lodges, are seasonal and are open weather permitting.

Getting To Olympic National Park: Located in the northwest corner of Washington, Olympic National Park is located close to the US and Canada border, making it accessible via two major international airports, Seattle, Washington, and Victoria International Airport, Canada. However, if you’re flying into Canada, you would need to carry all required documents to reenter the US to access the Park. You could alternatively take a bus or a train to get to Seattle and then rent a car and drive to the Park.

Lodging & Dining In Olympic National Park: Lodging and dining options inside the Park are limited to its one year-round and three seasonal lodges, 15 campgrounds, and a few restaurants. There are a few other lodging and dining choices outside the Park, which I have discussed in the later section of the post.

Things To Do In Olympic National Park 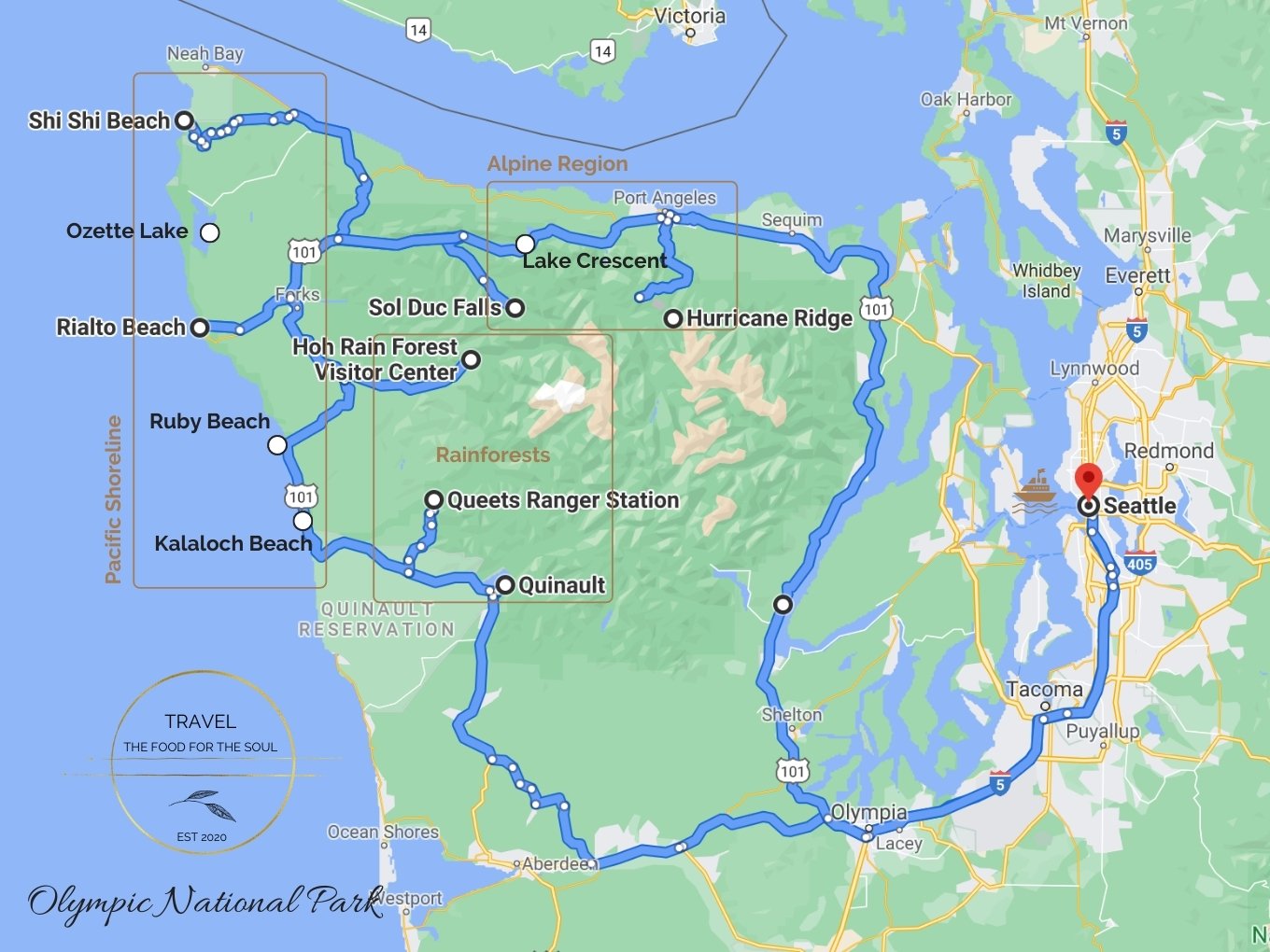 Olympic National Park Ranger Stations: Besides the visitor centers, the Park is also home to several seasonal ranger stations offering maps and brochures about the region. 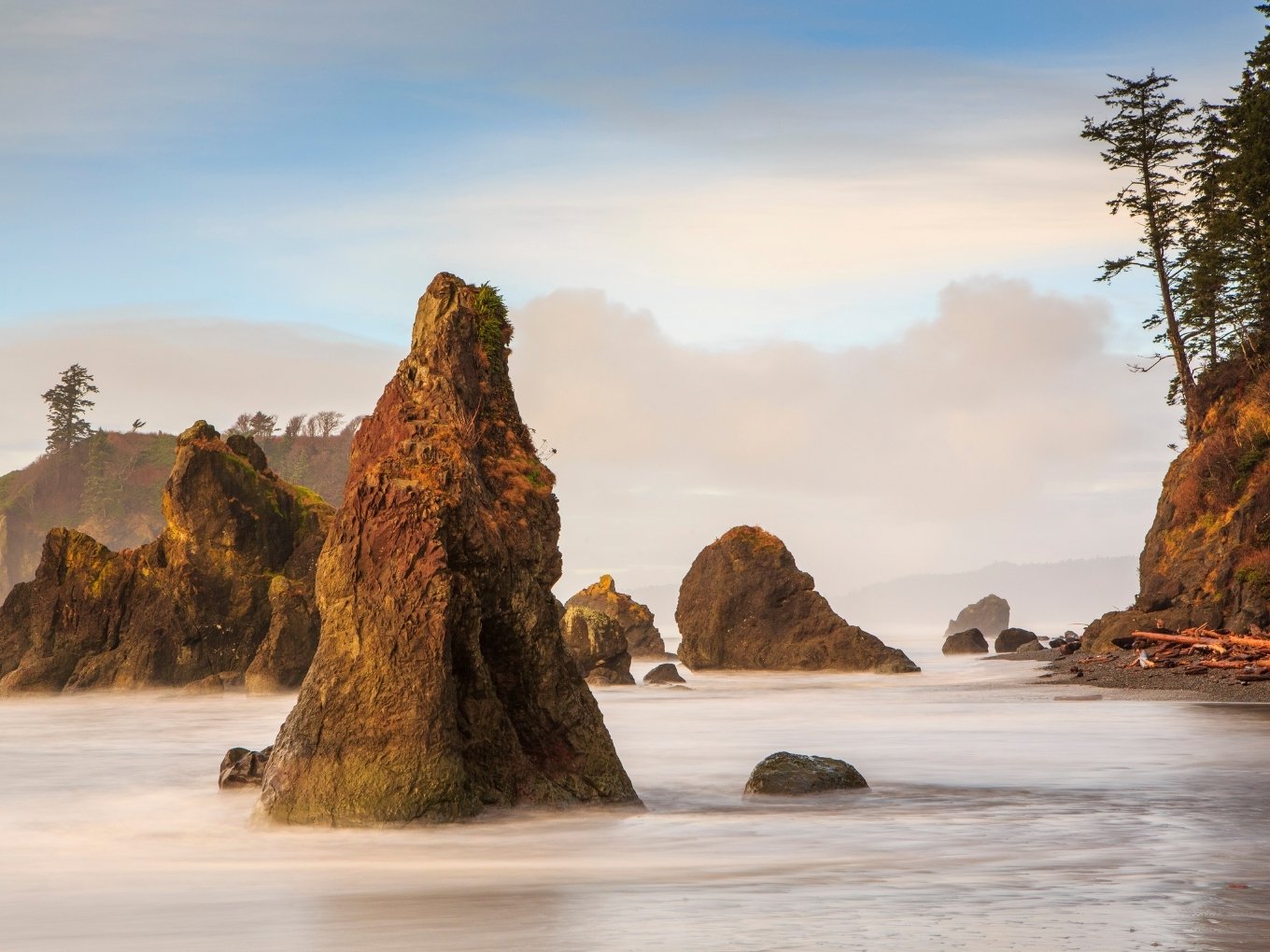 The west side of Olympic National Park, hugging the Pacific Coast, is home to a gorgeous shoreline with several beaches, tide pools, secluded coves, and sea stacks rising from the seabed. The dramatic coastline and beaches are accessible year-round but can be wet during the winter months. Here’re the best beaches in Olympic National Park, along the Pacific Coast, listed south to north.

Rialto Beach: Located about 40 miles north of Ruby Beach, in the town of La Push, Rialto Beach is known for its long black sand beaches, lined with driftwoods, and its famous 1.5 miles hike to Hole-in-the-Wall, a hole created in a sea stack.

Ozette Lake: Ozette Lake is a gorgeous lake tucked between old-growth trees, located 20 miles north of Rialto Beach. Besides Ozette Lake, the area is also home to an archeological site preserving an ancient village and also offers several hiking trails, a campground, and a ranger station. 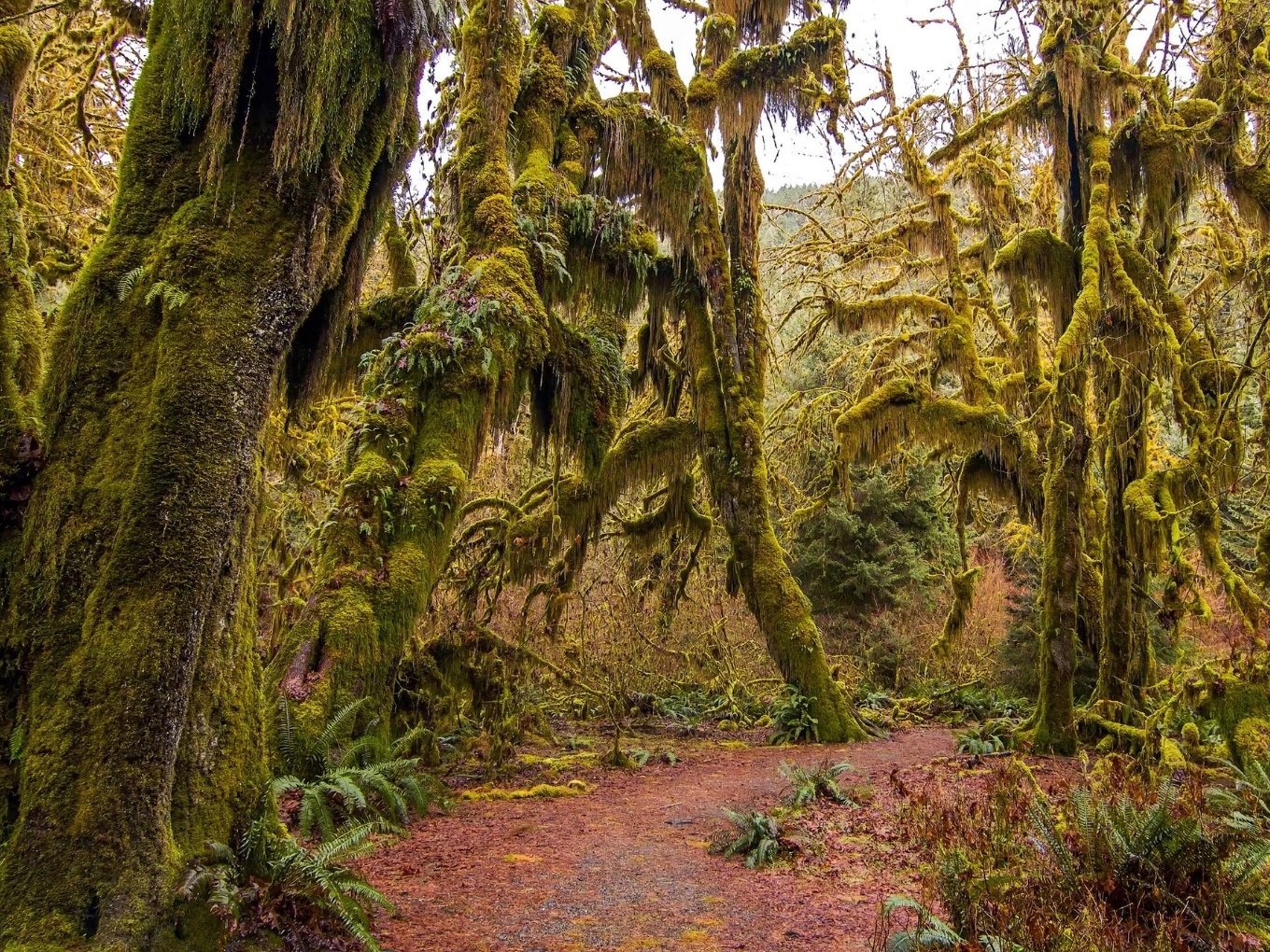 The impenetrable rainforests with old-growth moss-covered trees are a rare sight and a unique experience at Olympic National Park!

The three rainforests in Olympic National Park offer similar vistas, but the Hoh rainforest is the most popular and busy of all. The other two rainforests in the Park, Quinault and Queets, offer a similar experience and are relatively less crowded. 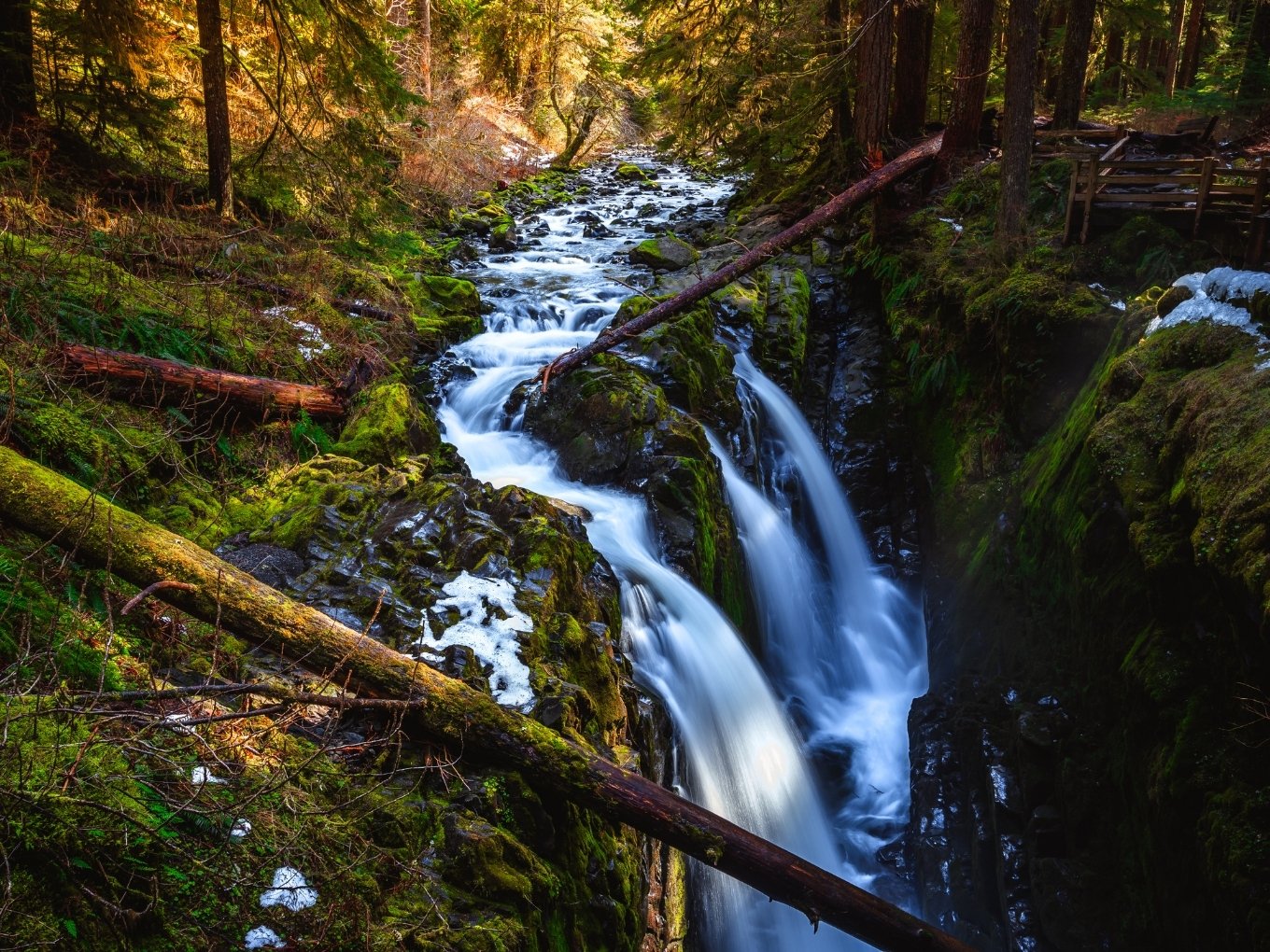 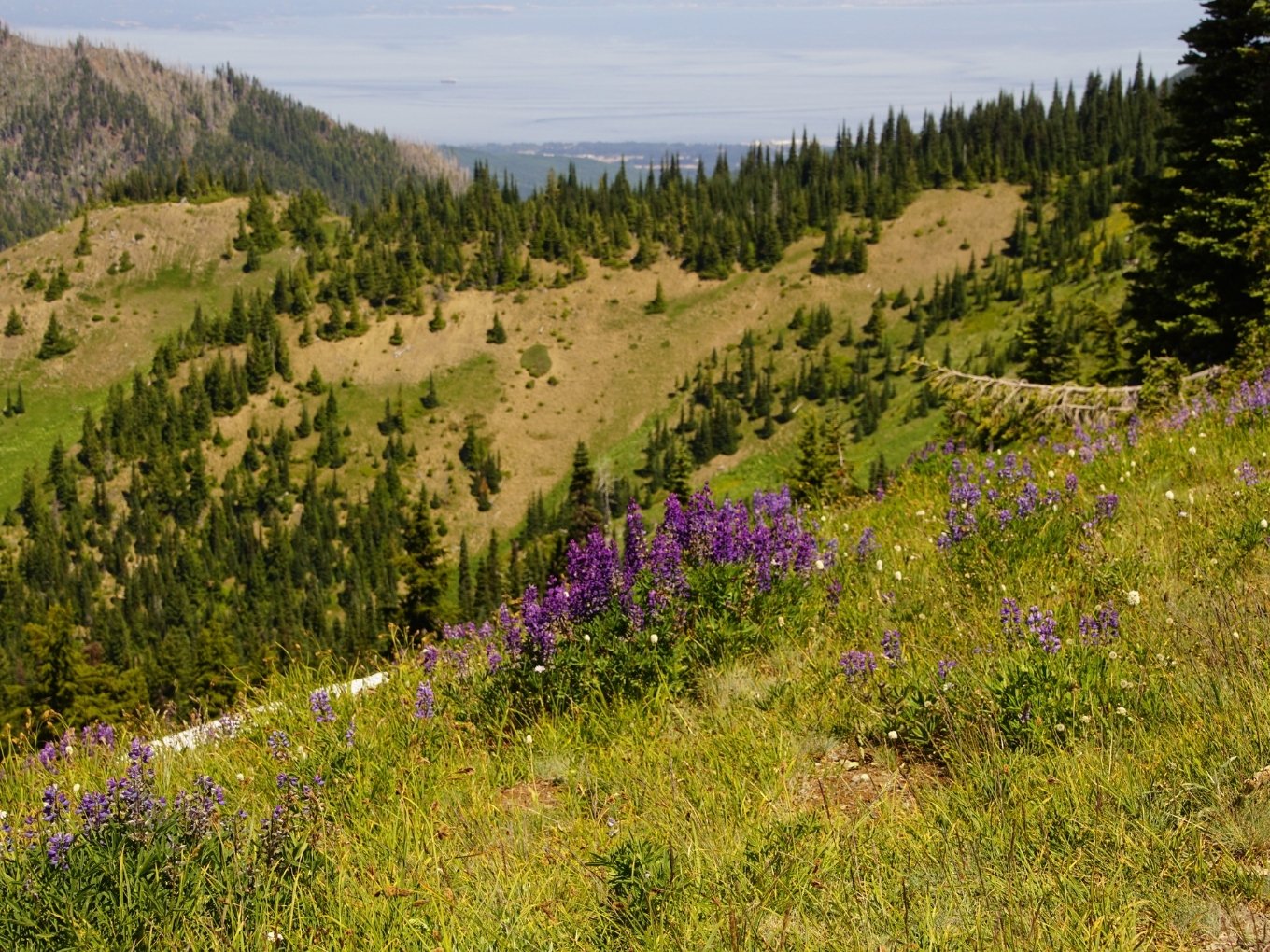 Rainforests, rugged coastline, and alpine scenery, there’re a ton of things to do in Olympic National Park!

With several vista points, hiking trails, beaches, and rainforests, it can be overwhelming when planning your trip to Olympic National Park. There’re three distinct sections in the Park, including the alpine section, the Pacific Coast, and the rainforests, and each area offers hiking trails and vista points.

3 Day Olympic National Park Trip Itinerary: Same as the 2-day itinerary, plus a couple of vista points and rainforests in the southwest part of the Park.

There’re several lodging options in Olympic National Park, but ar often sold out during the summer months, so you must plan and reserve in advance!

There’re many lodging and dining options in Olympic National Park, including four Park lodges, 15 campgrounds, and hotels, and bread and breakfasts in the nearby towns of Forks, Port Angeles, and Sequim.

Hotels & Bread & Breakfast Near Olympic National Park: If you’re unable to get a room in one of the Park lodges, your only other option is to stay in one of the bread and breakfasts located in the nearby town of Forks, Port Angeles, Port Townsend, and Sequim. 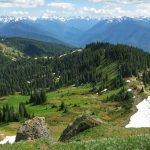