The Ultimate Guide To Oahu

The Ultimate Guide To Oahu

Geographically, Oahu is comprised of two volcanoes – Waianae and Koolau with a valley between these two ranges known as central Oahu Plain. Initially, home to the Tahitians, Oahu had several rulers and kings before it finally became part of the US in 1898 and soon became a significant naval base for the US Army. Oahu is also home to Pearl Harbor, known to the world due to the devastating events of December 7, 1941, when the Japanese attacked Pearl Harbor, destroying several US battleships and aircraft and claiming several lives, following which the US entered World War II. However, soon after World War II ended, Honolulu, Oahu emerged as a central hub for tourism in Hawaii and continues to serve as a gateway to the Hawaiian islands!

Oahu’s four different regions – Southern, Windward, North Shore, & Leeward, are home to world-class beaches and tourist attractions, but Oahu also serves as an excellent base for exploring the other Hawaiian islands!

Most people fly into Honolulu and use Oahu as a base when exploring the Hawaiian islands, as Oahu offers several inter-island flights daily from Honolulu. However, before you go island hopping from Oahu, you must explore all four regions of Oahu – (1) Southern Oahu featuring Waikiki, Honolulu, and Pearl Harbor, and Diamond Head Crater (2) East Oahu / Windward, home to several pristine beaches, lighthouses, coastal views, and several hiking trails, (3) North Shore – the laidback, rural countryside of Oahu Island, and (4) West Oahu / Leeward – featuring lagoons, beaches, hiking trails, and some of the best resorts in Oahu.

Planning Your Trip To Oahu 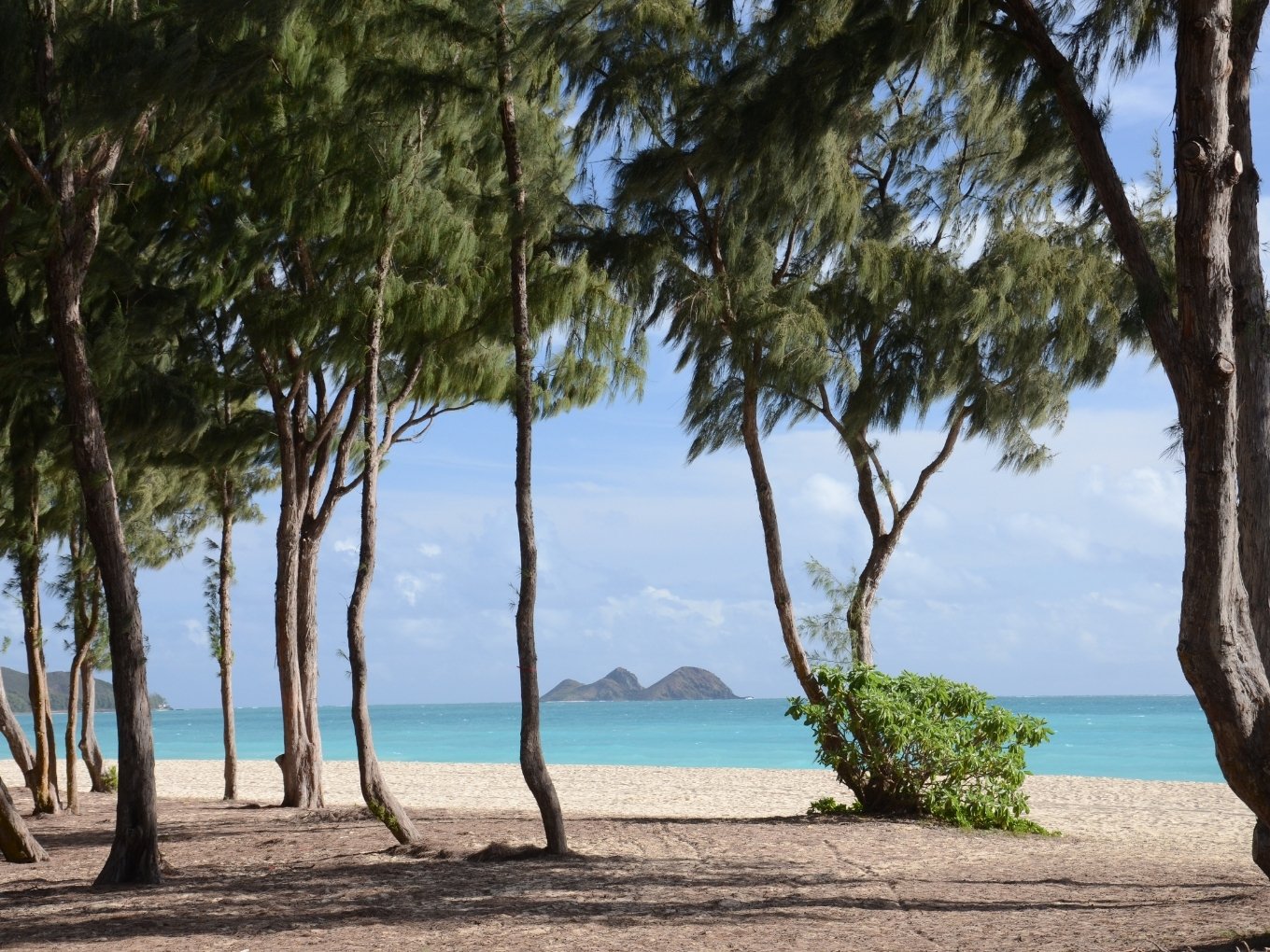 Flying into Honolulu, staying in Waikiki or downtown Honolulu, and using sightseeing tours is the best way to get the most out of your trip to Oahu!

Best Time To Visit Oahu: Oahu, with warm weather throughout the year, is a year-round destination! However, there are two peak seasons in Oahu – (1) Summer, especially June through August, when the weather is perfect and dry, and schools are on break (2) Early Winter, particularly December, during the holidays when most of the country is covered in snow, you can still enjoy warm weather, beach, and watersports in Oahu. The shoulder seasons, January through May and September through November, have a wet climate but are the best choice to beat the crowds in Oahu.

Time Required At Oahu: With several things to see and do, I recommend spending a minimum of four days in Oahu, which should give you enough time to cover all significant attractions in Oahu, including Pearl Harbor, Waikiki, North Shore, and a day at the Polynesian Cultural Center. If you have more time, you could spend a couple of weeks in Oahu and still not run out of places to see and things to do in Oahu.

Getting To Oahu: Daniel K. Inouye International Airport, also known as Honolulu International Airport (HNL), Honolulu, Oahu, is Hawaii’s major airport and serves as an entry point for the majority of tourists visiting the Hawaiian islands. Honolulu International Airport, located on the south side of Oahu, is pretty close to Waikiki and, unquestionably, the best airport to get to Oahu. I also highly recommend Norwegian’s Seven Day Hawaii Roundtrip Cruise to all first-time visitors to Hawaii. This cruise departs from Honolulu, Oahu, travels to all major Hawaiian islands, and then brings you back to Honolulu.

Rental Cars, Parking & Public Transportation In Oahu: Most hotels and attractions in Oahu offer paid parking, and though Oahu has a bus service – TheBus and ride-hailing services, I recommend renting a car when visiting Oahu. However, if you’re planning to just stay within the city limits, you can do without a car, but if you’re planning to visit the North Shore and other remote areas in Oahu, which I highly recommend doing, you would definitely need a rental car.

Sightseeing Tours In Oahu: It’s always a good idea to use a local sightseeing tour company when visiting a city for the first time, and the same applies to Oahu. If it’s your first trip to Oahu, I recommend using a guided sightseeing tour to get to know the city. There’re several local companies that offer guided land and boat tours in Oahu – (1) Waikiki Trolley Tours, offers hop-on-hop-off bus services stopping at all major attractions in downtown Honolulu and East Oahu, (2) Pearl Harbor and Honolulu City Tour departing from several hotels in Waikiki, and (3) The Surf Bus offering full-day guided tours of Oahu’s North Shore.

Lodging & Dining In Oahu: Undeniably, Honolulu, especially the Waikiki neighborhood & downtown Honolulu, are the most popular places to stay in Oahu famous for its several luxury hotels, boutique shops, and vibrant nightlife, but you will also find quite a few great resorts in Oahu’s leeward / west side. Oahu’s several dining options can also be overwhelming, including charming local eateries, fine dining restaurants, and seafood shacks, but you shouldn’t miss a few Hawaiian dishes and experiences, including Poke, Lomi Salmon, banana bread, and luau when visiting Oahu. I have reviewed the lodging and dining options in Oahu in detail in the later section of this post.

Things To Do In Oahu 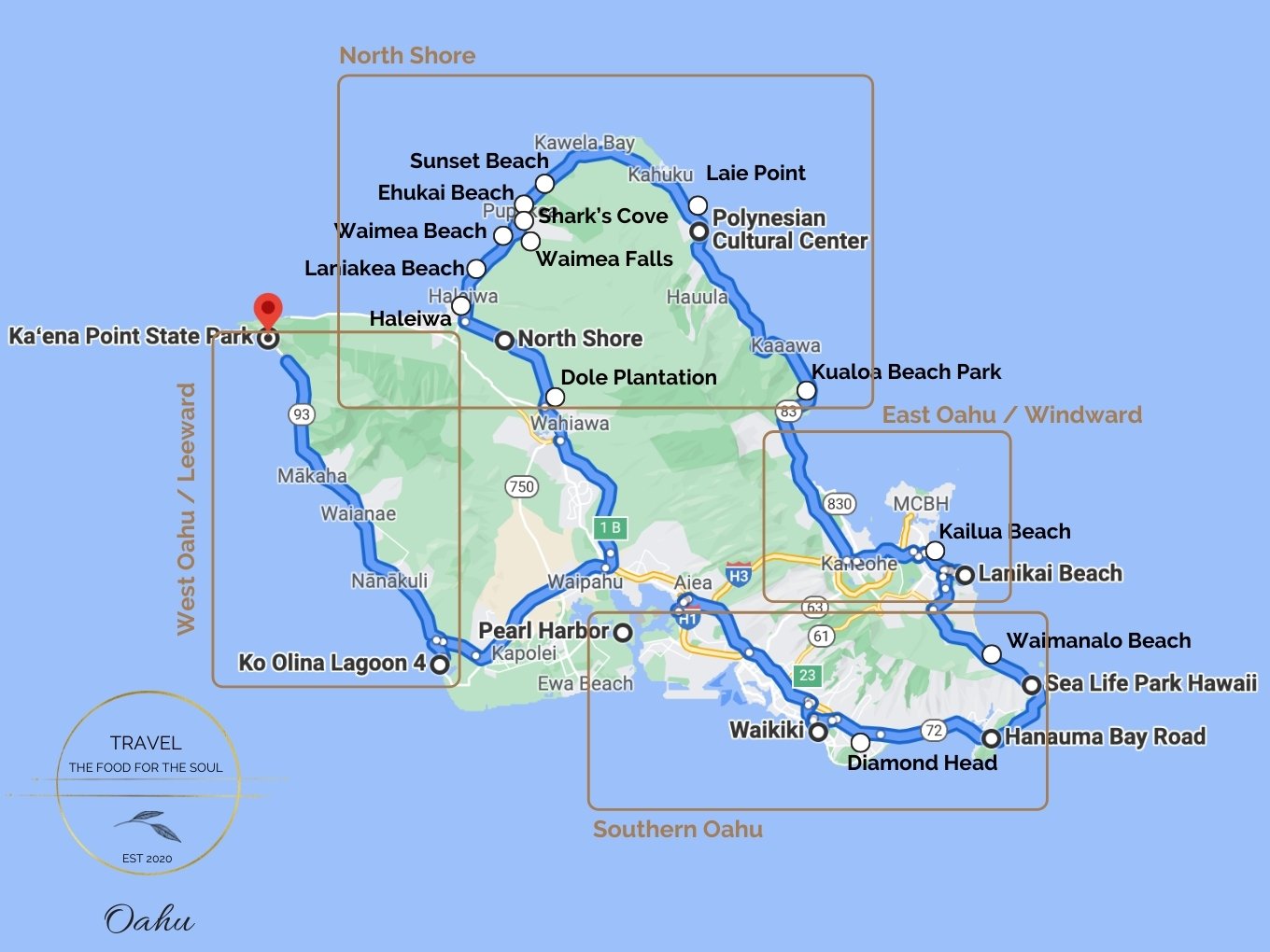 Every region in Oahu is equally beautiful and unique, and it’s challenging to pick one over the other, so I recommend spending a minimum of four days in Oahu, visiting a region per day. However, if you’re pressed for time and have to pick one over the other, here is what I suggest – (1) One day trip to Oahu – stick to Southern Oahu, (2) Two-day trip to Oahu – Spend day 1 in Southern Oahu, and day two exploring the North Shore.

Here’re the must-see places on a trip to Oahu, starting at Southern Oahu and then traversing the island in an anti-clockwise direction! 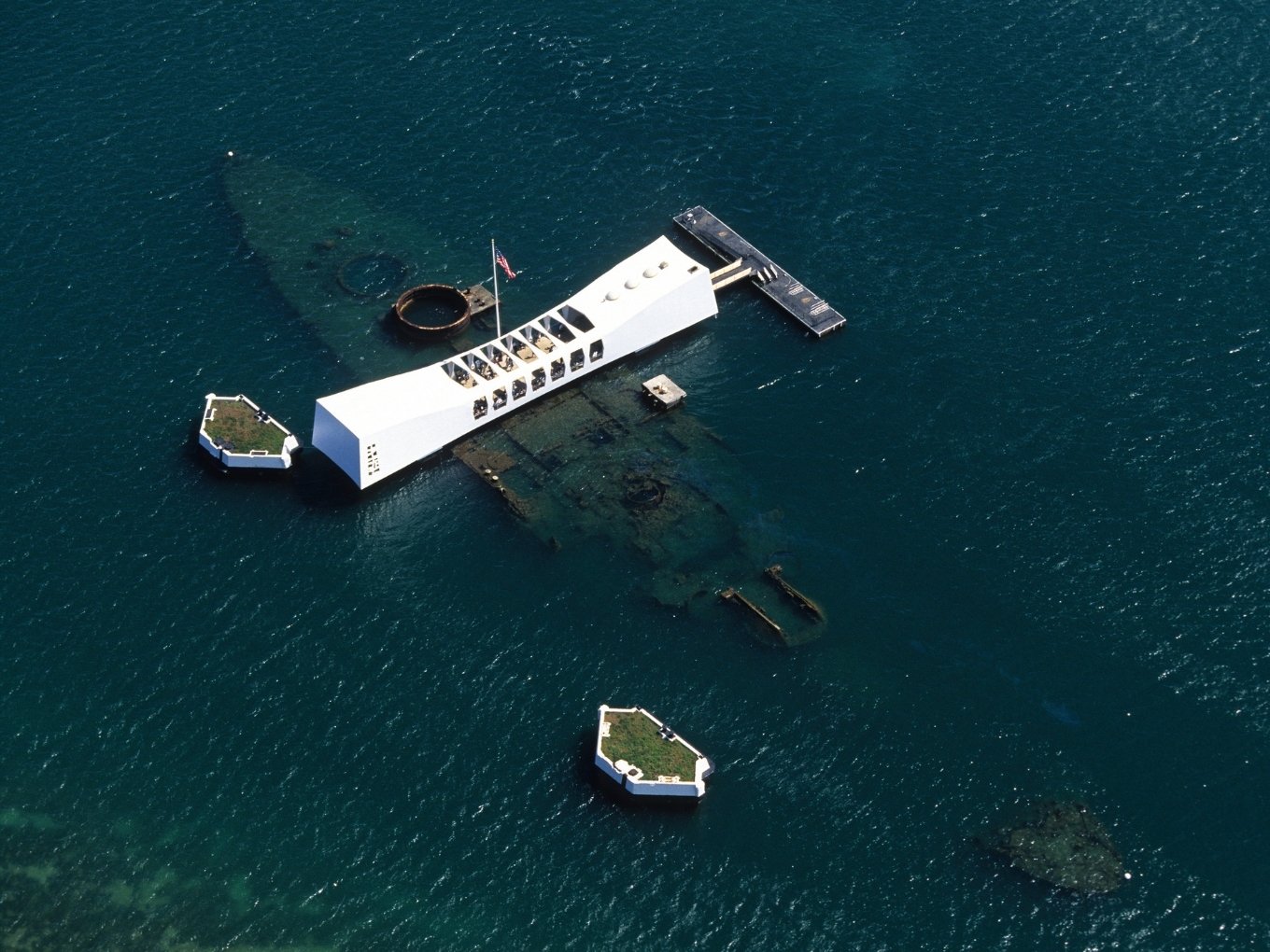 Waikiki, a vibrant neighborhood located on the southern shore of Honolulu, is Oahu’s most popular resort & hotel area featuring the world-famous Waikiki Beach, beachfront resorts, world-class shopping, Honolulu Zoo, Waikiki Aquarium, multiple dining options, and nightlife. The Waikiki Trolley is a great way to sit back, relax, and discover the many things in Waikiki. 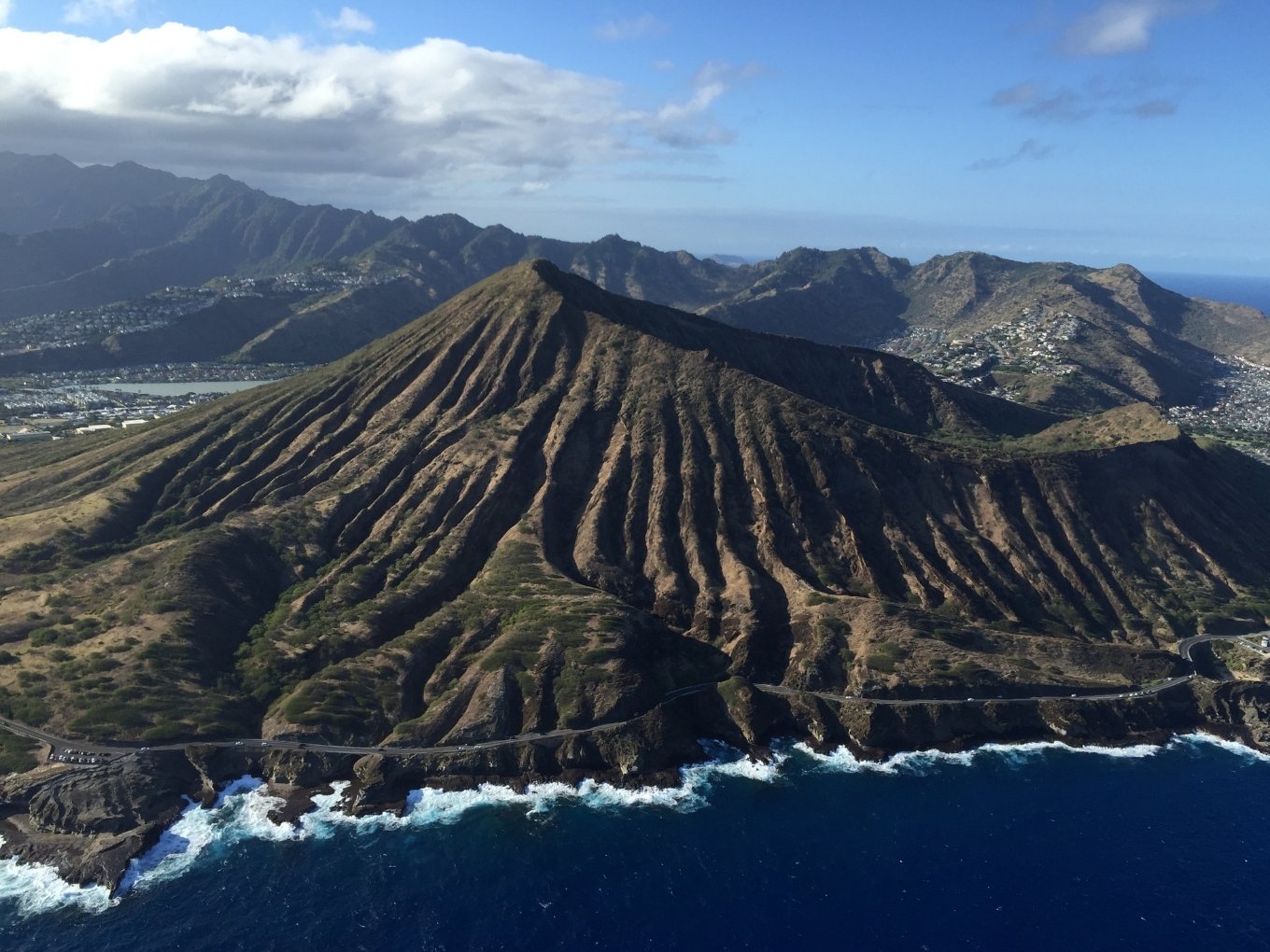 Diamond Head Crater, an extinct volcano and a popular hiking destination in Oahu, features stunning panoramic coastal views. Originally called Le’Ahi, but later renamed to “Diamond Head” by the British sailors, who were deceived by the glittering stones at the top of the crater. The hike to the top is 1.5 miles roundtrip and takes around an hour to reach the summit.

Hanauma Bay Beach, a crescent-shaped beach created by a violent volcanic eruption, is home to a diverse array of marine life and is Oahu’s most sought-after snorkeling destination! However, there is a limit of 3,000 visitors per day, so I highly recommend going early in the morning or making online – Department of Parks & Recreation. 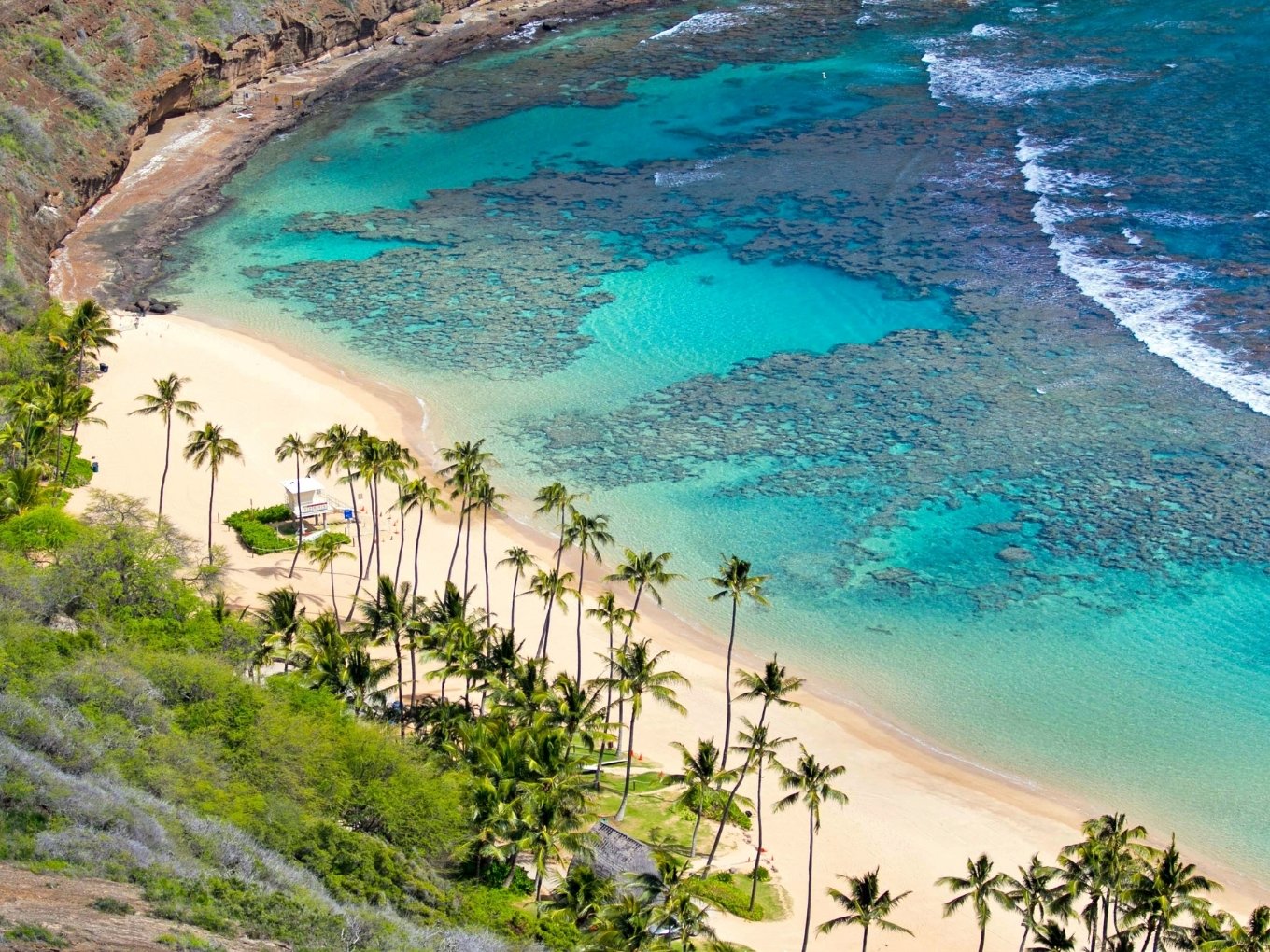 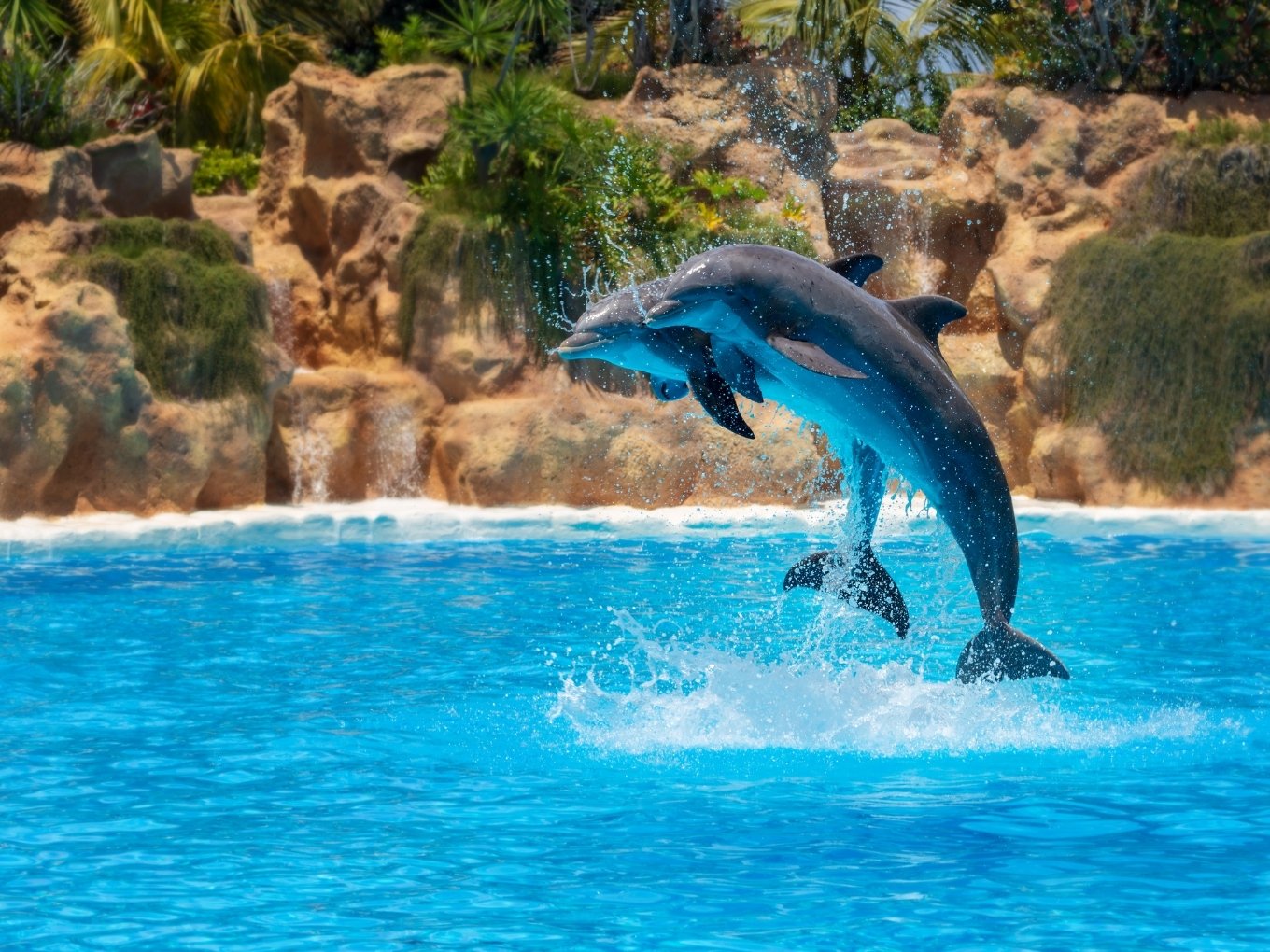 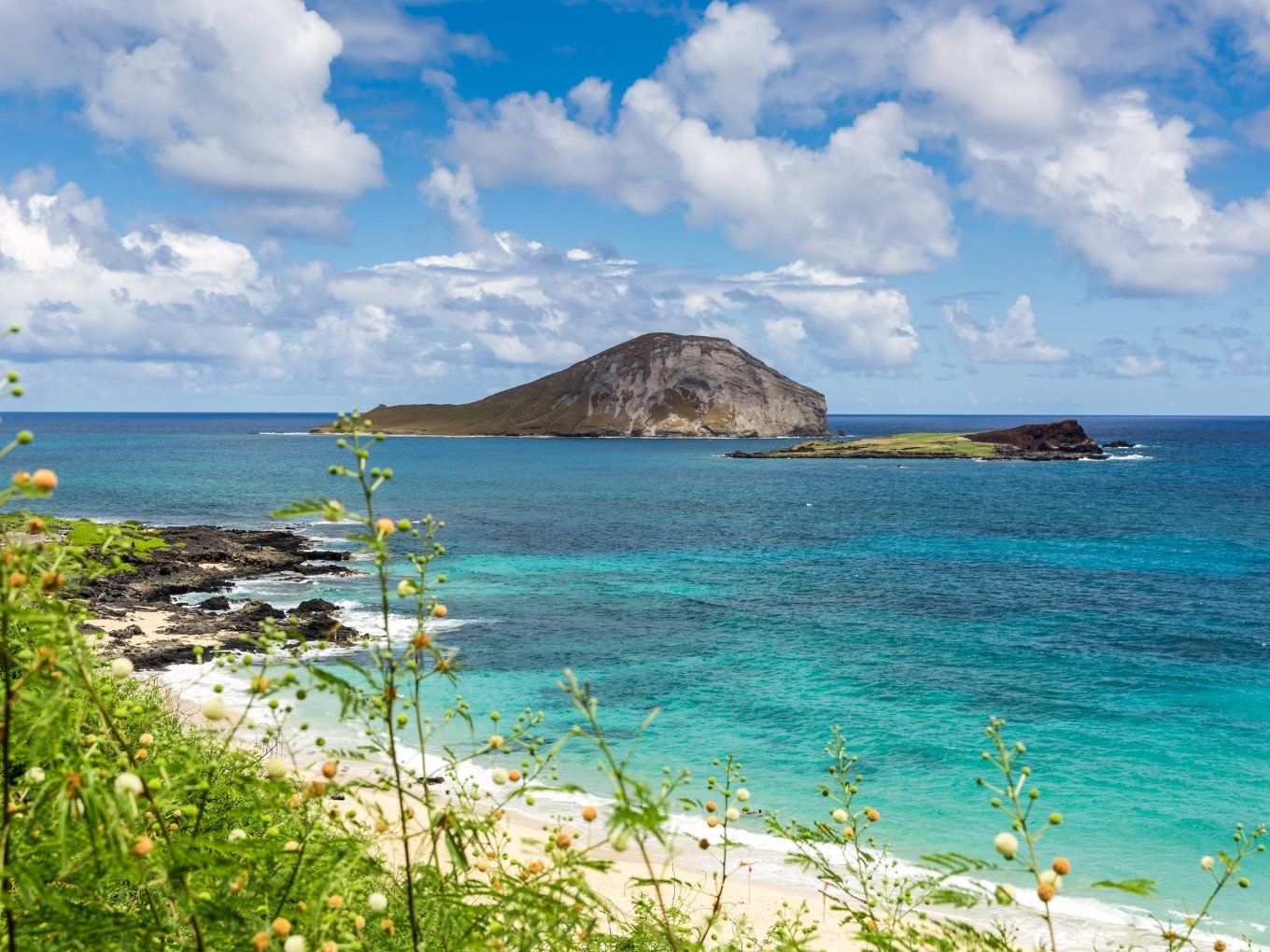 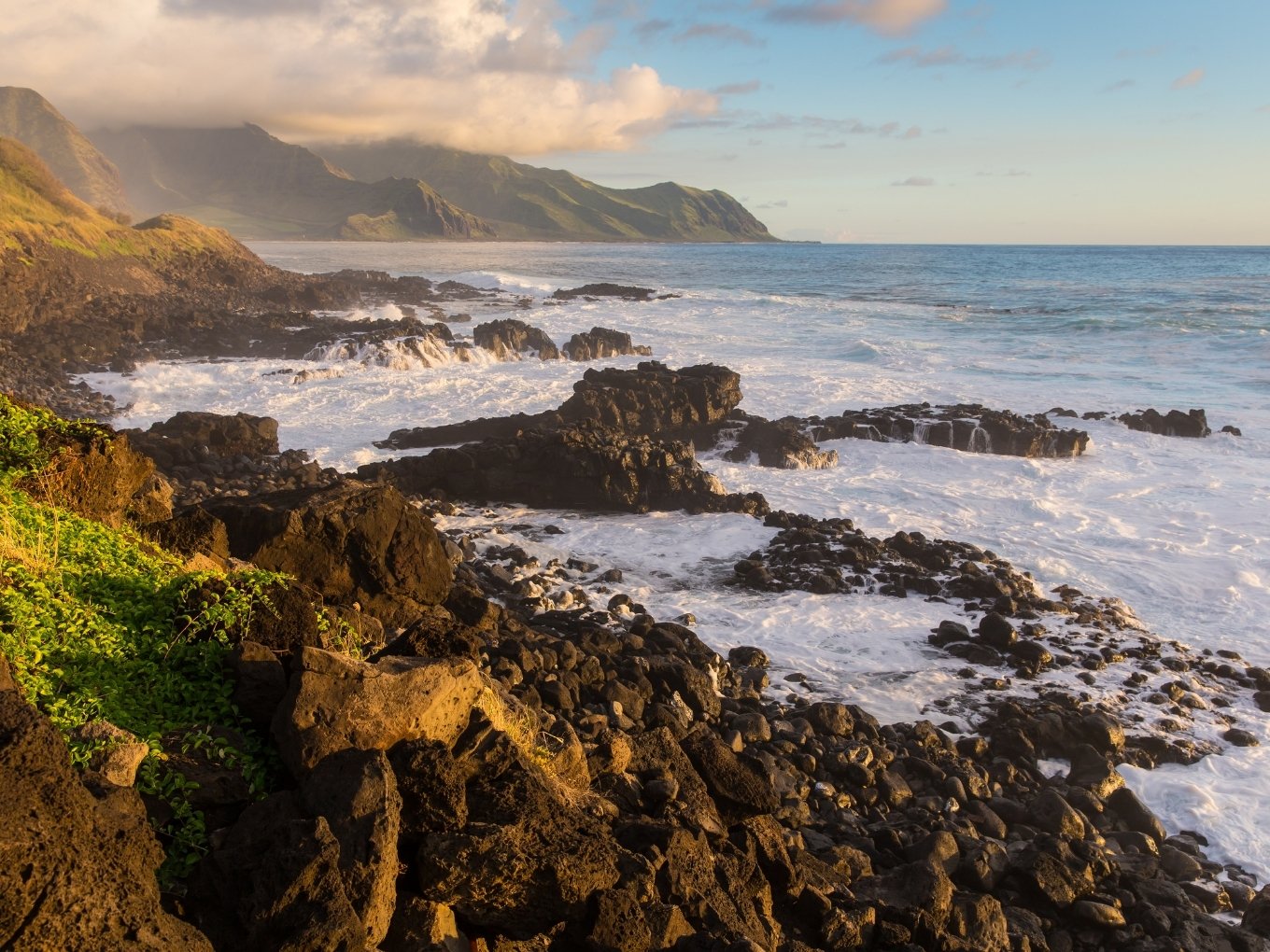 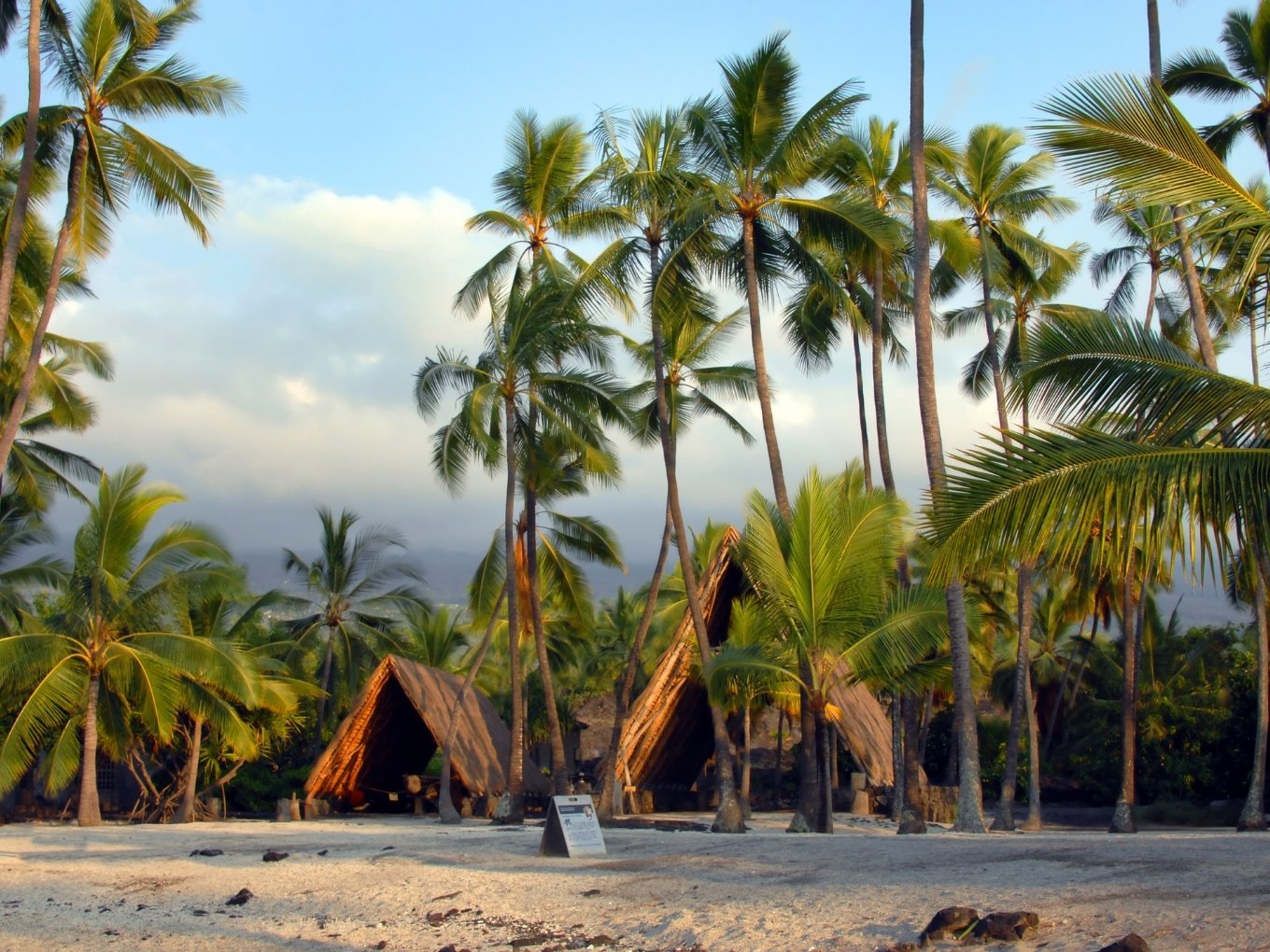 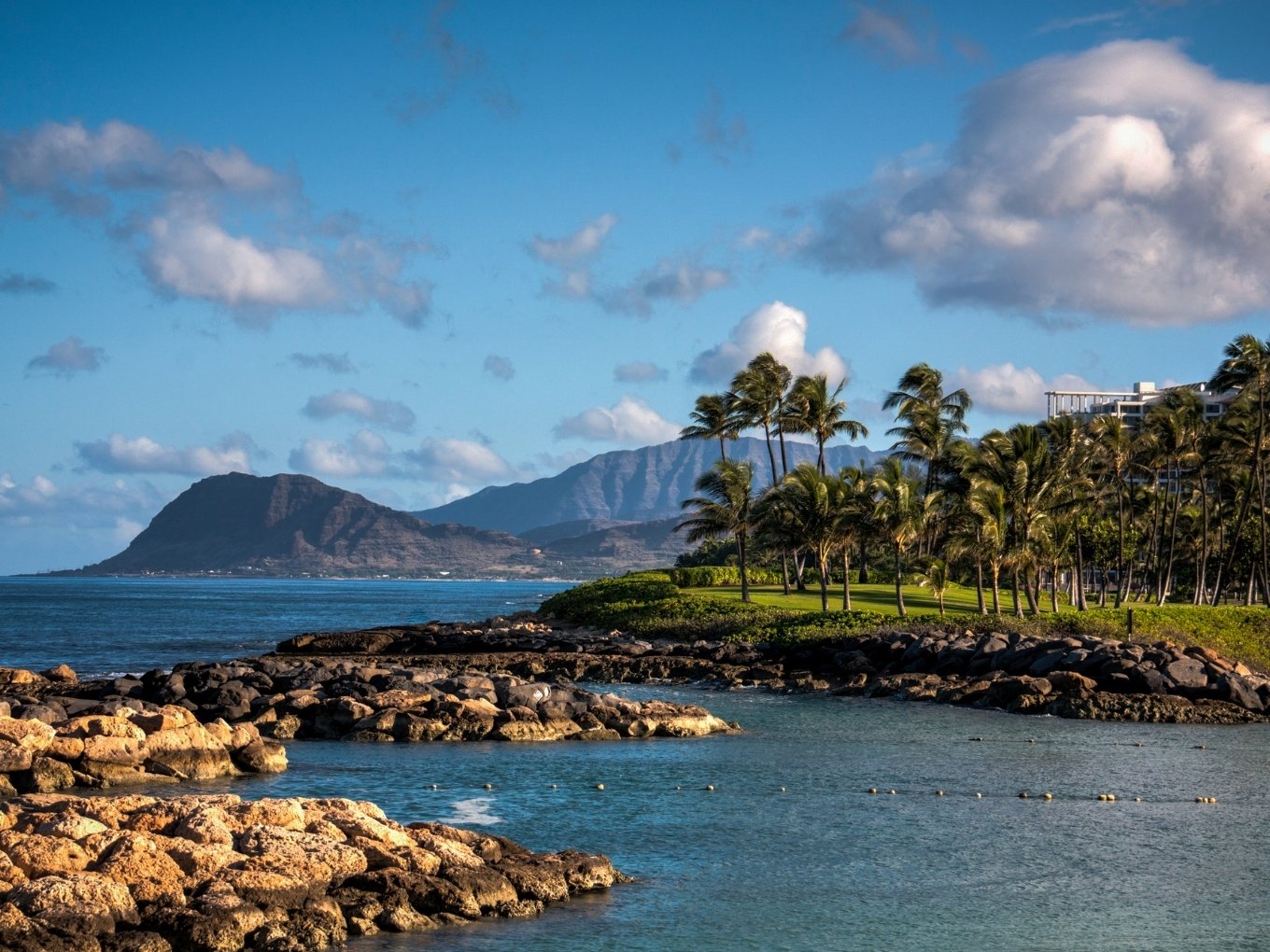 Oahu’s Leeward coast / west side is home to gorgeous lagoons, beaches, hiking trails, and some of the best resorts in Oahu. Here’re the top things to see and do in West Oahu – Ko Olina Lagoons, Pink Pillbox Hike, and Ka’ena Point State Park. Though not as famous as other regions of Oahu, the Leeward Coast is worth a visit if you have time left after visiting the rest of Oahu. 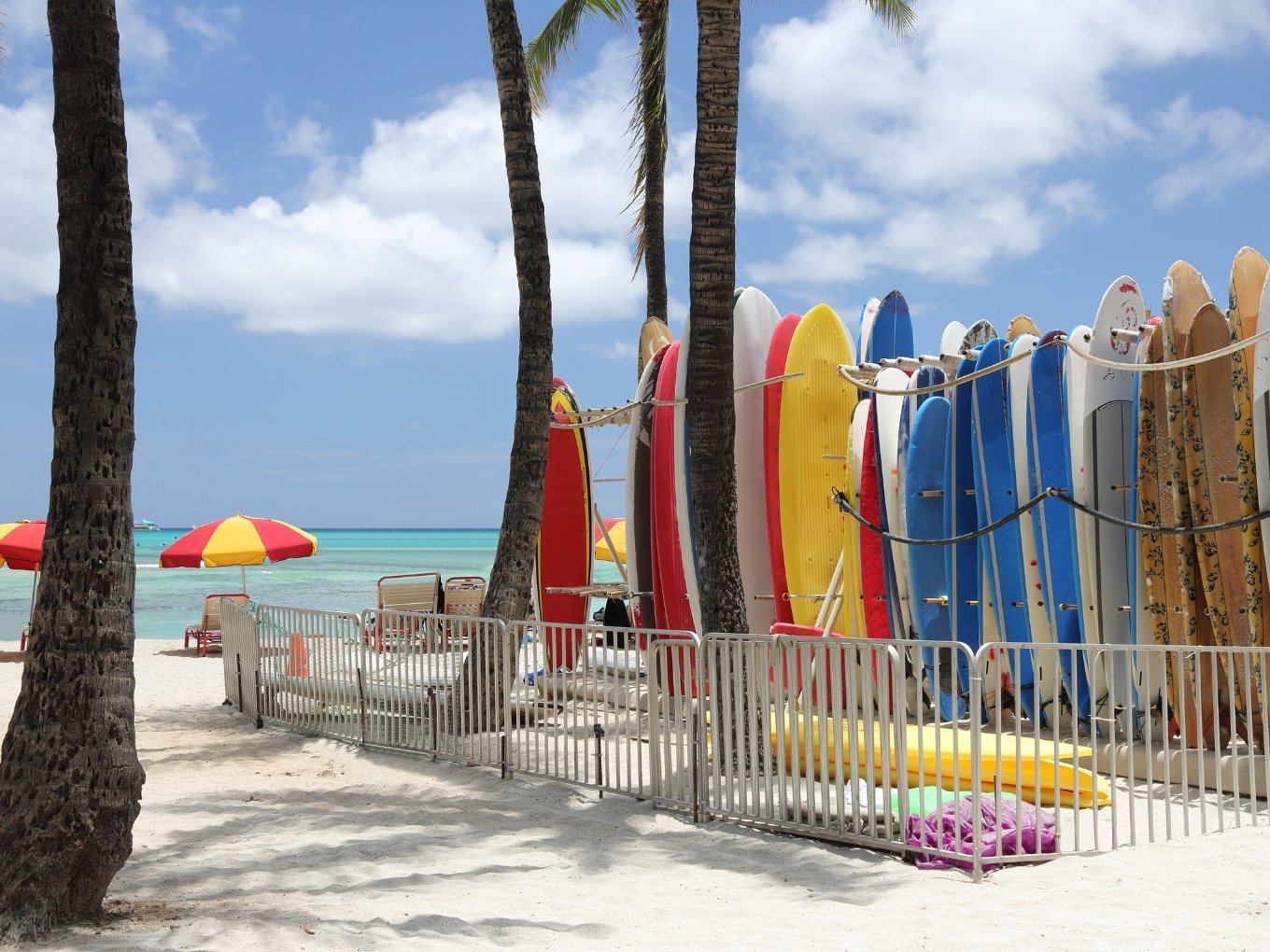 Stay in one of the oceanfront resorts and enjoy a traditional Hawaiian Luau for an authentic Oahu experience!

Hotels In Oahu: Oahu being a popular tourist destination and a port of call for many cruise ships, features several seaside resorts, luxury hotels, and locally owned charming bread and breakfasts. Given the small size of Oahu, you can stay anywhere on the island and still easily access all attractions in Oahu. When deciding on hotels or resorts in Oahu, there’re primarily two choices – oceanfront and non-oceanfront properties. While most tourists stay in the Waikiki neighborhood and downtown Honolulu, you will also find a few great resorts in Oahu’s leeward / west side. Here’re my top picks for hotels and resorts in Oahu –

Restaurants In Oahu: While you will find several restaurants in Oahu ranging from fine dining to seafood shacks, there’re a few Hawaiian delicacies that you must not miss on a trip to Oahu – (1) Luau, a traditional Hawaiian buffet with music and dance, at the Polynesian Cultural Center, (2) Poke, seasoned cubed fish, available in most restaurants and grocery stores, (3) Huli Huli chicken, barbecued chicken at Mike’s Huli Chicken, North Shore, Oahu, (4) Lomi Salmon, cubed salmon with tomatoes, available in most restaurants serving Hawaiian food, (5) Banana Bread at roadside stalls, (6) Shaved Ice at Matsumoto Shave Ice in North Shore, and (7) Kona Coffee at Kona Coffee Purveyors, Honolulu. 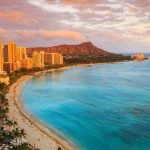 I hope you enjoyed reading the post, The Ultimate Guide To Oahu, and I hope this will help you plan your trip to Oahu. You can find other Hawaii attractions in my Hawaii Travel Guide.