The Ultimate Guide To Mount Washington

The Ultimate Guide To Mount Washington 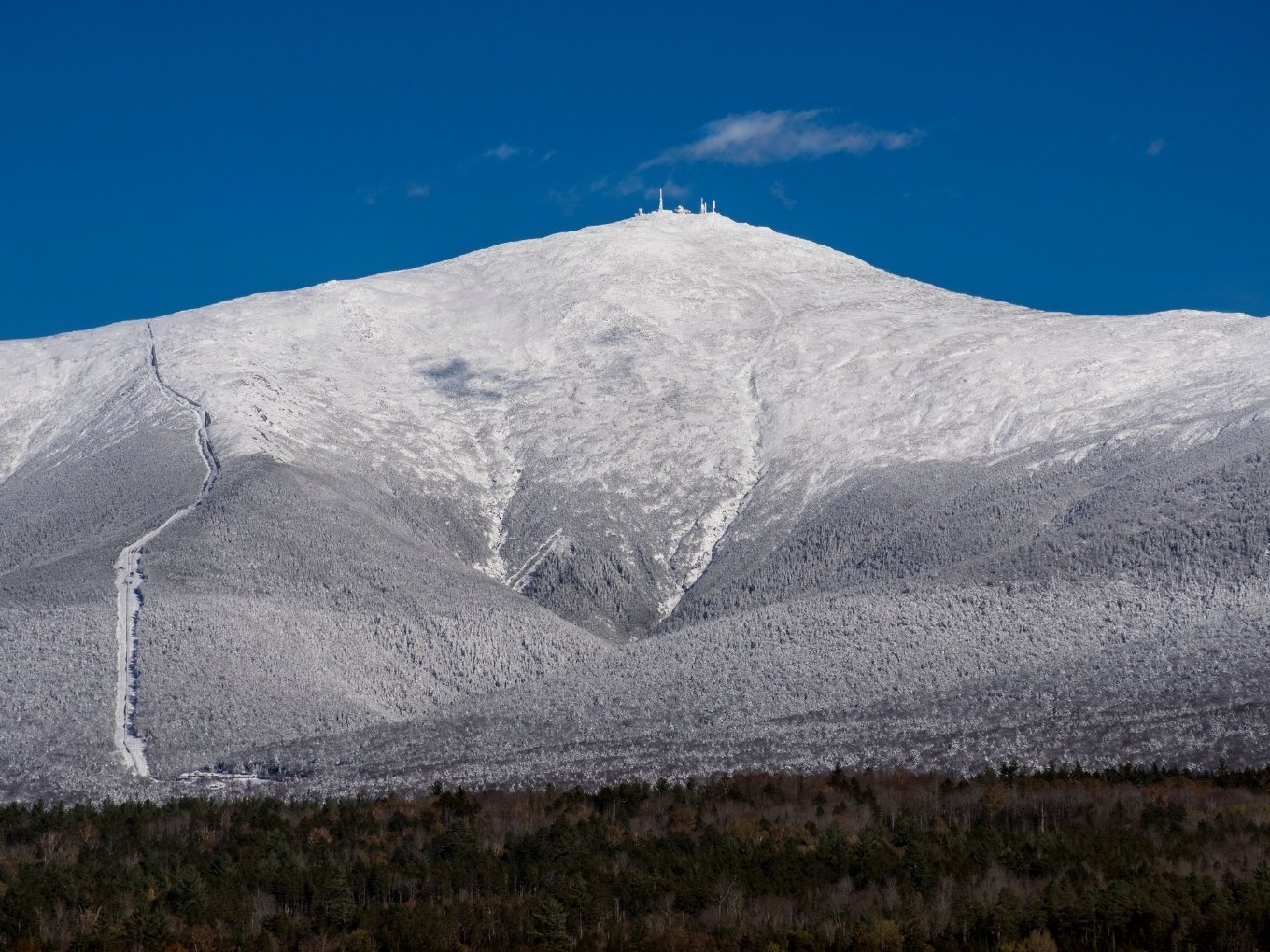 Mount Washington, the pinnacle of the Presidential Range of the White Mountains!

Mount Washington, looming more than six thousand feet above sea level, is the tallest peak in the northeast US, and its summit is home to Mount Washington State Park, known for its museum, observatory & phenomenal views!

Mount Washington’s base was once the dwelling place of the Native Americans, who referred to the peak with several different names, including Kodaak Wadjo, meaning the hidden top, Agiocochook – the place of the spirit, and Waumbik, which means white rocks. The indigenous people considered the top of the mountain a sacred place, where the GODs lived, and never climbed to the top of the mountain. However, things changed upon the arrival of the European settlers, and shortly surveyors and geologists started exploring Mount Washington. The summit of Mount Washington soon became a top tourist destination of New England and home to a few radio stations and several radio-transmission facilities.

Here is my ultimate guide to Mount Washington, featuring essential trip-planning information, major attractions, options to get to the summit, and recommendations on hotels and restaurants near Mount Washington!

Planning Your Trip To Mount Washington 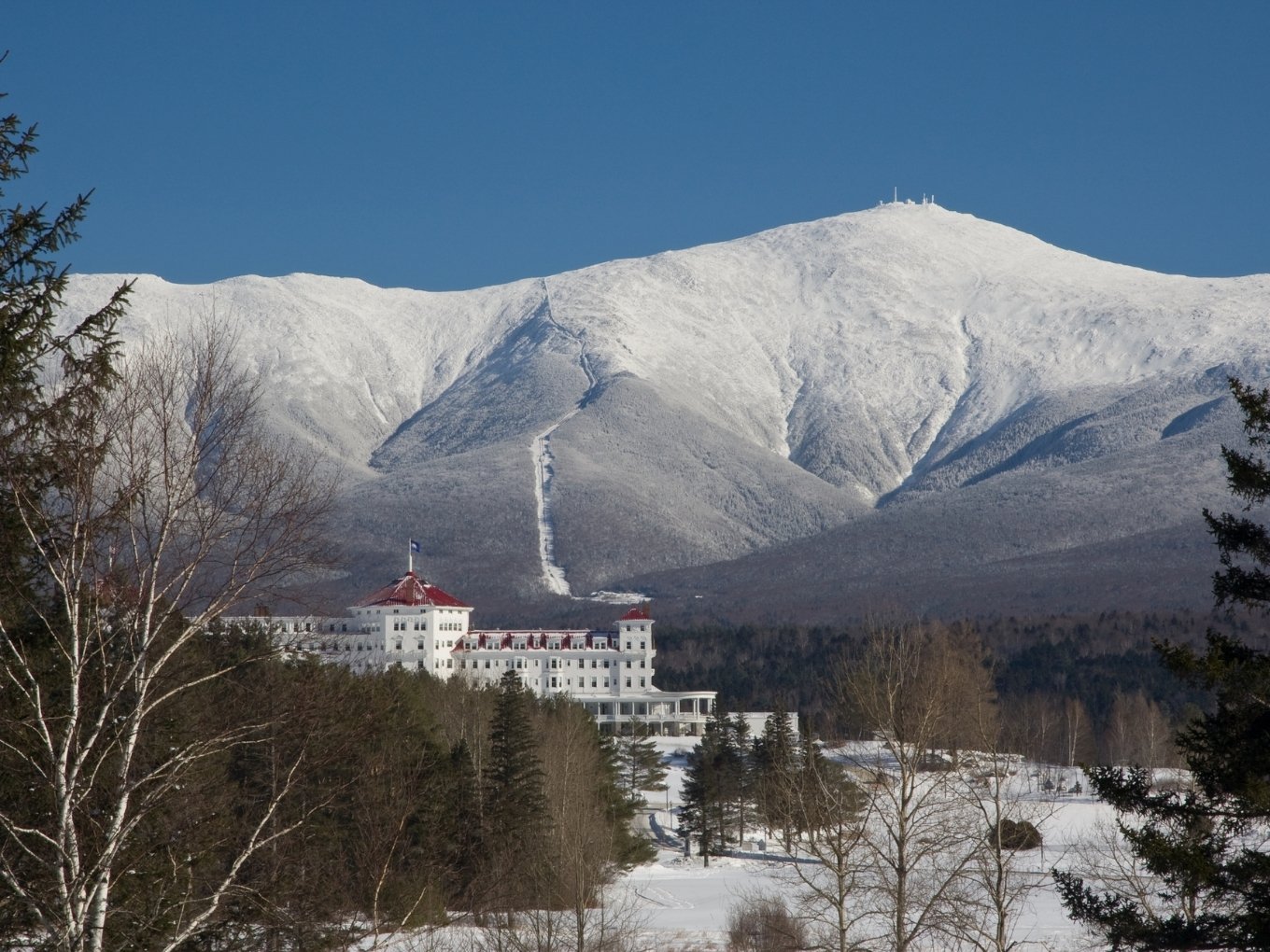 Visit during summer and fall, fly into Portland International Jetport in Maine, and then drive to Mount Washington for the best sightseeing trip to the summit of Mount Washington!

Best Time To Visit Mount Washington: Given the altitude, the summit of Mount Washington remains inaccessible during the winters months, but the ski resorts and parks at the base of the mountain continue to operate throughout the year. However, if you’re going to Mount Washington for sightseeing and exploring the summit, your best option is to travel during the summer and fall months, mid-May through mid-October, when the Cog Railway and the Auto Road are open. Even during the warmer months, the weather at the summit is very erratic, and I highly recommend checking the weather conditions before heading up to the top and carrying warm clothing.

Lodging Options Near Mount Washington: While you don’t necessarily need to stay close to the Mountain, but if you’re seeking solitude and nature, you may as well stay in one of the charming bread and breakfasts and resorts in the town of Bretton Woods, Jackson Village, or Gorham. Here’re my top picks for hotels near Mount Washington

Whether you choose to hike up the mountain, take the Cog Railway, or drive the Auto Road, you will be passing through a fascinating and diverse landscape! Once at the top, you can explore the several attractions of Mount Washington, including the Mount Washington State Park, the popular geological summit marker, the historic Tip Top House – one of the oldest structures built atop Mount Washington, a museum, Mount Washington Observatory, and exceptional mountain and valley vistas. 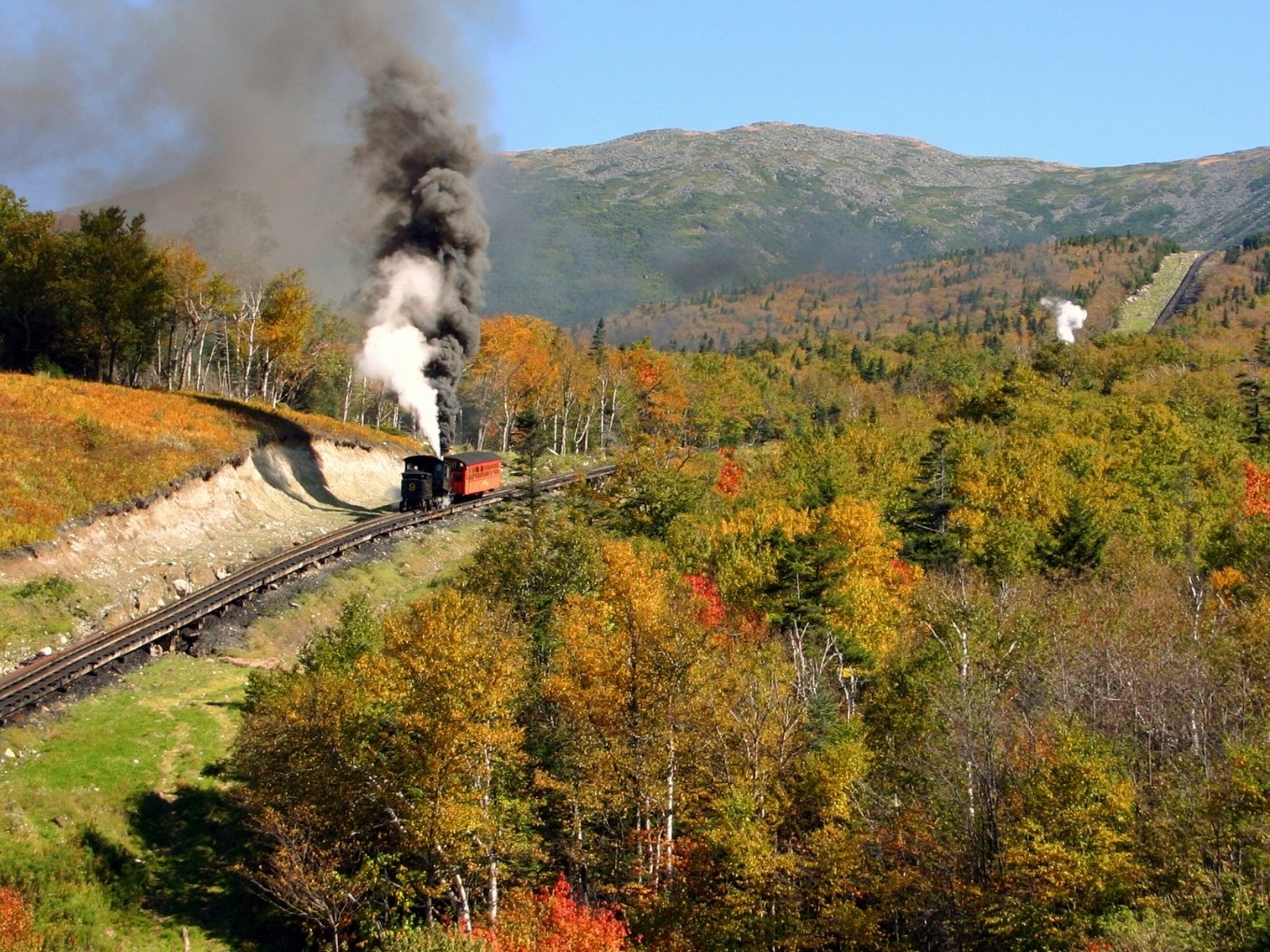 Passing through lush valleys and rocky terrains, the Mount Washington Cog Railway features spectacular mountain vistas, alpine pools, and a lifetime experience! Once at the top, there’s a one-hour layover, which provides enough time to explore the summit, marvel at the panoramic views, the geological summit marker, the historic Tip Top House, the cafeteria, and summit gift shops. The Cog Railway is a popular way to summit Mount Washington, and I highly recommend making advance reservations. 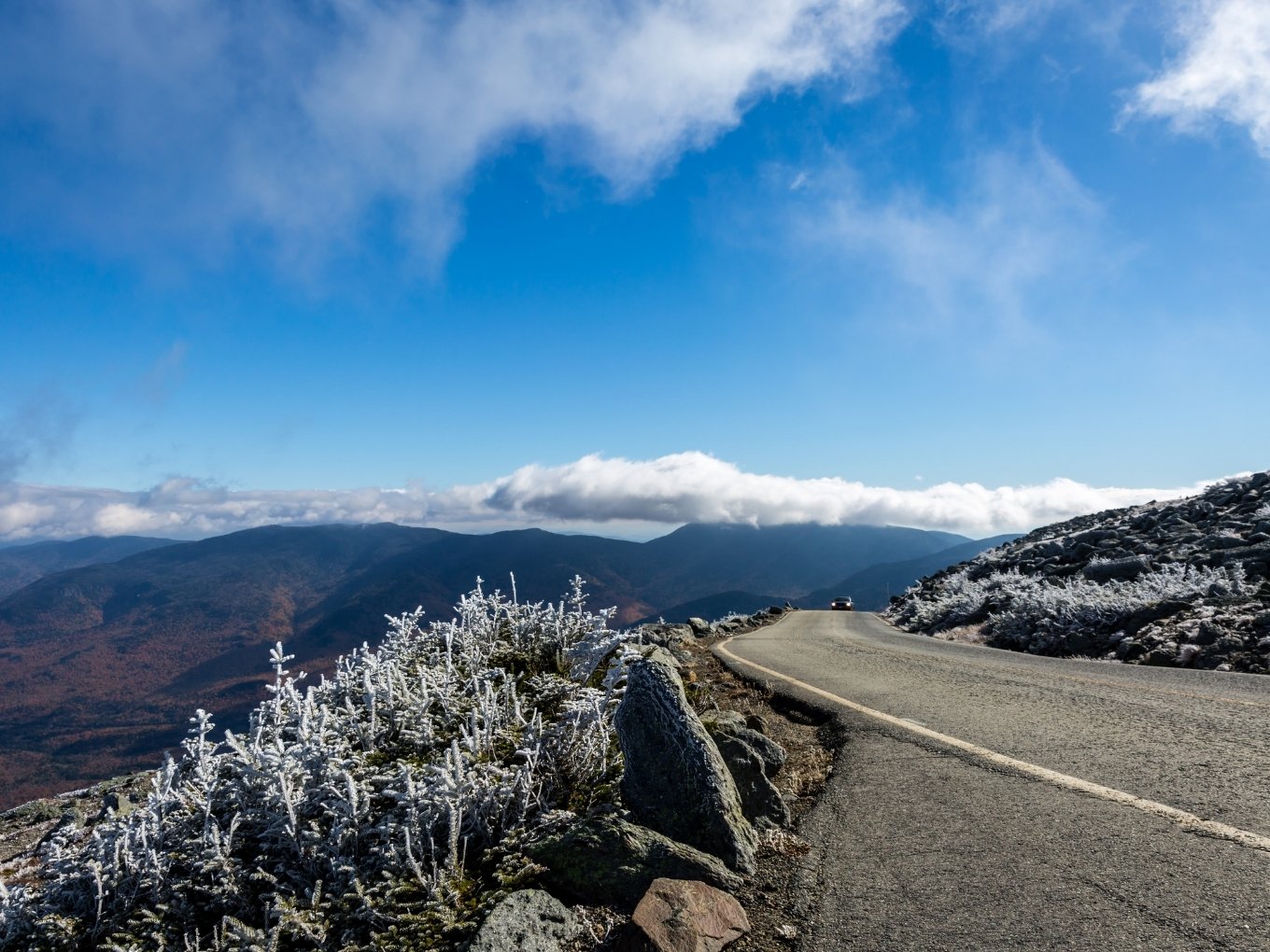 Mount Washington Auto Road, an eight-mile steep scenic road starting at the Pinkham Notch on Mount Washington’s eastern base going all the way to the summit, is one of the most scenic mountain drives in the US! However, the Mount Washington Auto Road is pretty steep, with a few narrow sections, and involves hairpin turns, and is recommended only for seasoned drivers. The drive up to the summit takes about 45 minutes, and the descend down takes approximately 30 minutes. Once atop the mountain, you can spend as much time you wish exploring the attractions at the summit.

However, if you’re not comfortable driving up and down the steep and narrow roads, you could take a guided shuttle tour, where a knowledgeable and experienced guide drives you through the Mount Washington Auto Road to the top of the mountain and back. The guided tours take about two hours, with sufficient time to explore the attractions at the summit. 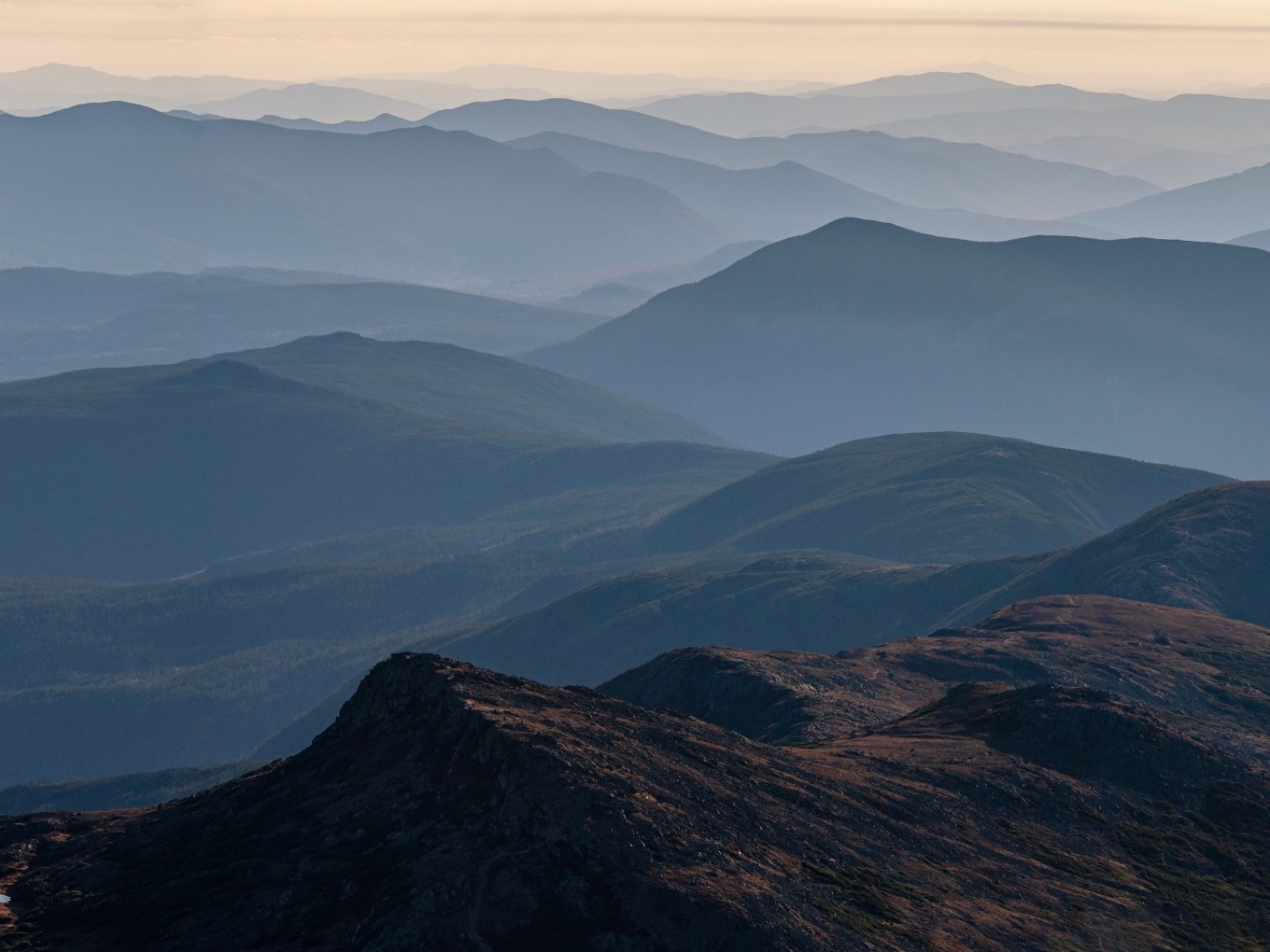 While there are several hiking trails leading to the summit of Mount Washington, the Tuckerman Ravine Trail is the most hiked and popular summit hike in Mount Washington. The Tuckerman Ravine Trail is a 3.8 miles one-way, extremely strenuous, and challenging hike through rough and rocky terrains and recommended only for seasoned hikers. Most hikers hike to the summit and then take the hikers shuttle down to the mountain’s base.

The Tuckerman Ravine Trail starts near the AMC Pinkham Notch Visitor Center and steadily climbs towards the summit, passing through alpine lakes and wooded regions. Hiking to the summit of Mount Washington can be very rewarding and is on the top of the list of many hikers worldwide. However, hiking Mount Washington requires proper preparation, hiking & camping gear, and the latest information about the trail, which can be found on the Mount Washington website. 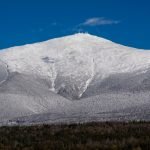