The Ultimate Guide To Los Angeles

The Ultimate Guide To Los Angeles 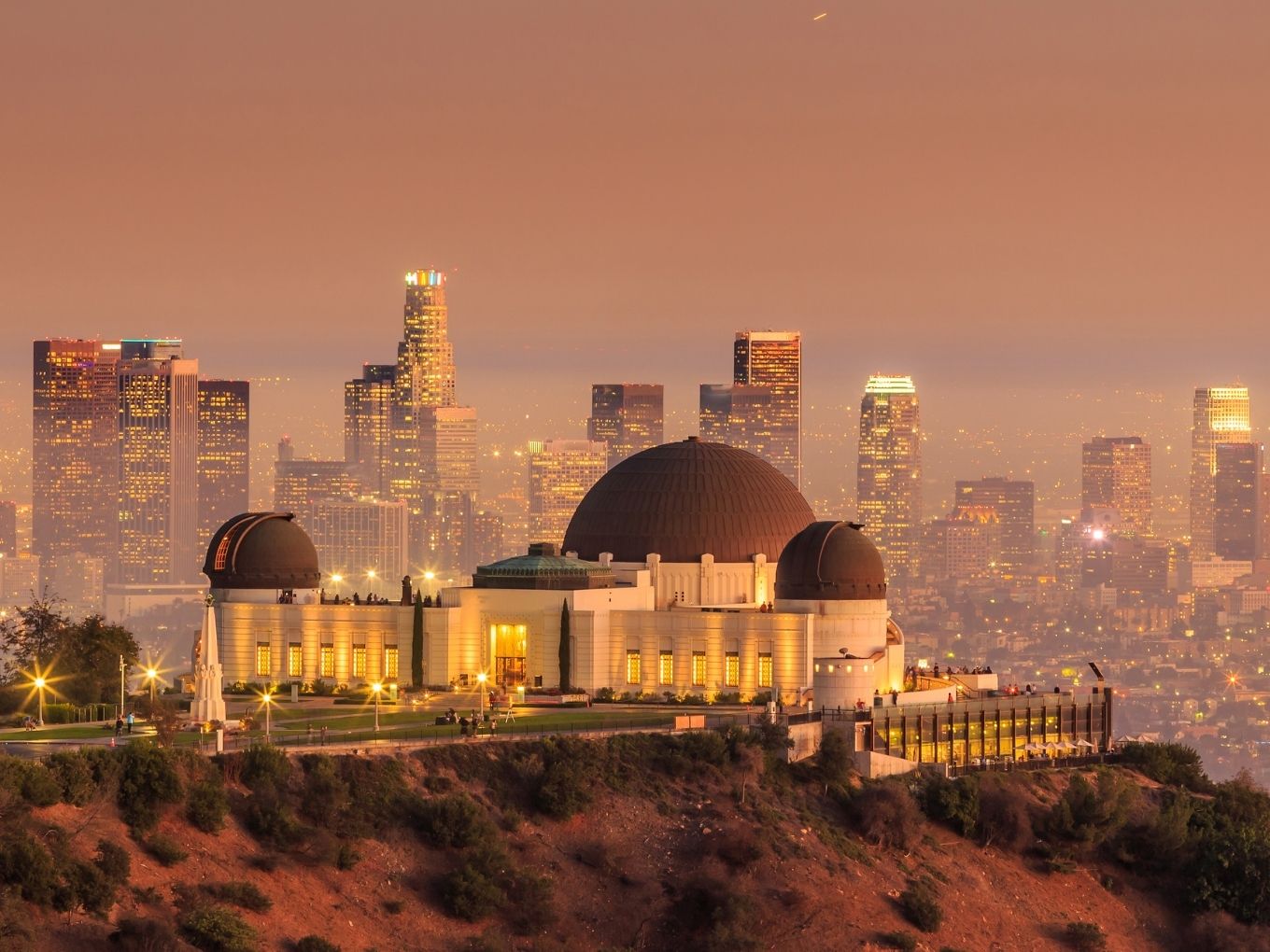 Los Angeles, The City of Angels!

Los Angeles, the second-largest city in the US, is internationally acclaimed for its film and entertainment industry, Hollywood!

Surrounded by mountains, desert, and the beautiful Pacific Coast, Los Angeles is blessed with natural beauty! Los Angeles is also endowed with great weather, with year-round mild and dry climate with plenty of sunshine, there’s never a bad time to visit Los Angeles!

The natural beauty and the perfect year-round weather led to the swift expansion of the film industry in Los Angeles!

The city of Los Angeles was soon transformed into a melting pot of different cultures, bustling with skyscrapers, several museums, and tourist attractions.

Getting To Los Angeles 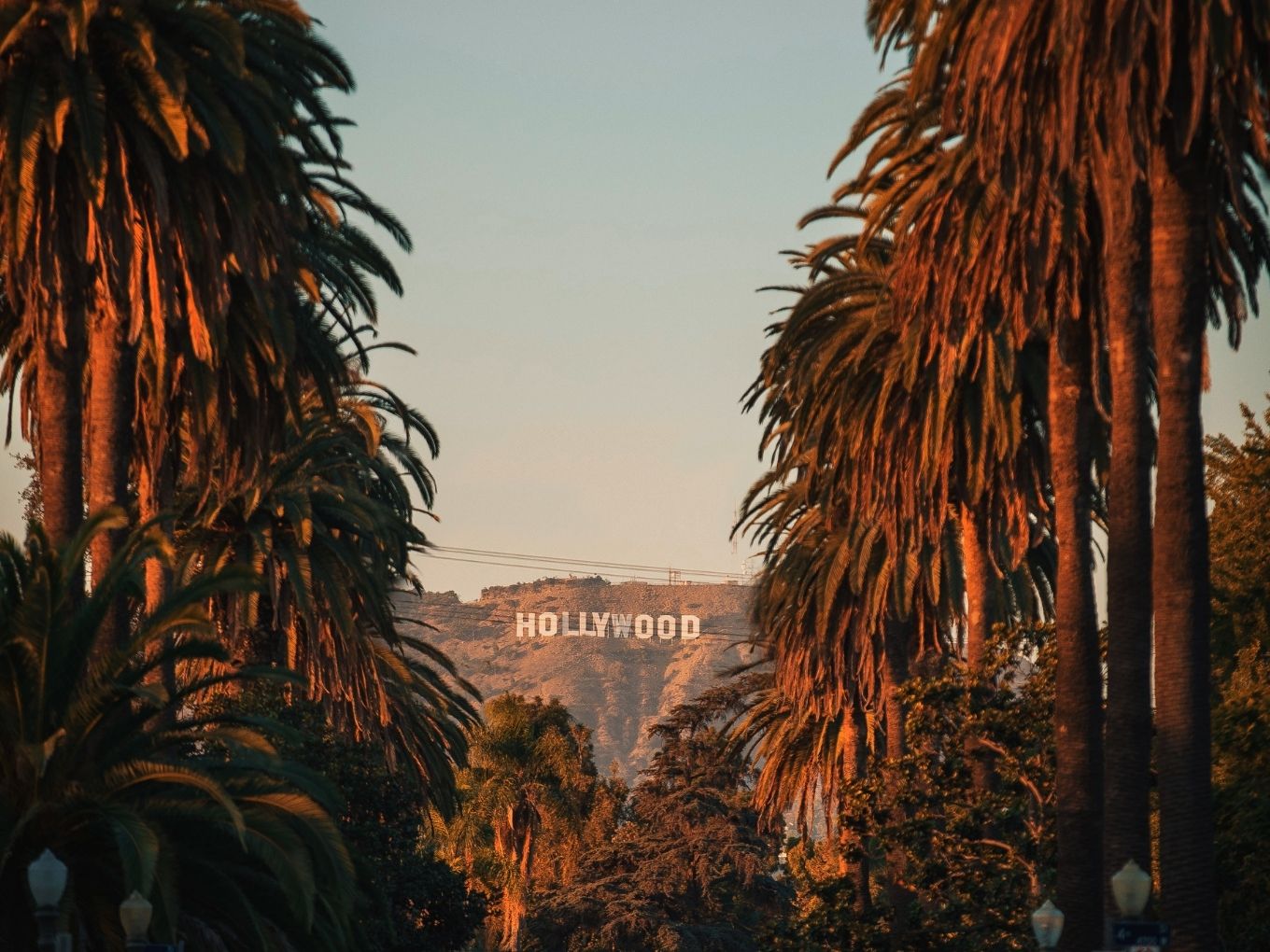 No matter which airport you fly to, it’s always a good idea to rent a car when visiting California!

There’re many people who try to cover multiple cities and attractions when visiting California, and which I highly recommend! There is a lot to see in California besides Los Angeles and Hollywood.

People often like to visit San Diego, San Francisco, or Las Vegas when visiting Los Angeles. You can also add several other California attractions to your Los Angeles itinerary based on the time you plan to spend in California.

If you’re planning to drive to Los Angeles from San Francisco or San Diego, you must take the Pacific Coast Highway!

Driving from San Diego to Los Angeles via PCH: The drive to Los Angeles from San Diego via PCH is about 150 miles but can take 5-6 hours, depending on how much time you spend at each stop. You can stop and explore several gorgeous beach tows in California, including La Jolla, Carlsbad, Encinitas, Dana Point Harbor, Laguna Beach, Newport Beach, Huntington Beach, and Long Beach.

I don’t like and recommend driving long distances, but the Pacific Coast Highway is an exception!

If flying or driving is not an option, you could use Amtrak’s train and Greyhound’s bus services to get to Los Angeles.

If you don’t find a direct train to Los Angeles from your current location, you can always take the train to the closest Amtrak station and then take a connecting train or bus to Los Angeles.

Things To Do In Los Angeles

Los Angeles, the La La Land, is a sprawling city with several attractions!

You will find several sightseeing opportunities and many indulging recreational activities in Los Angeles and nearby areas, including some great theme parks, museums, gorgeous beaches, and a few iconic Los Angeles landmarks.

Here’re my favorite and must-see attractions in Los Angeles! 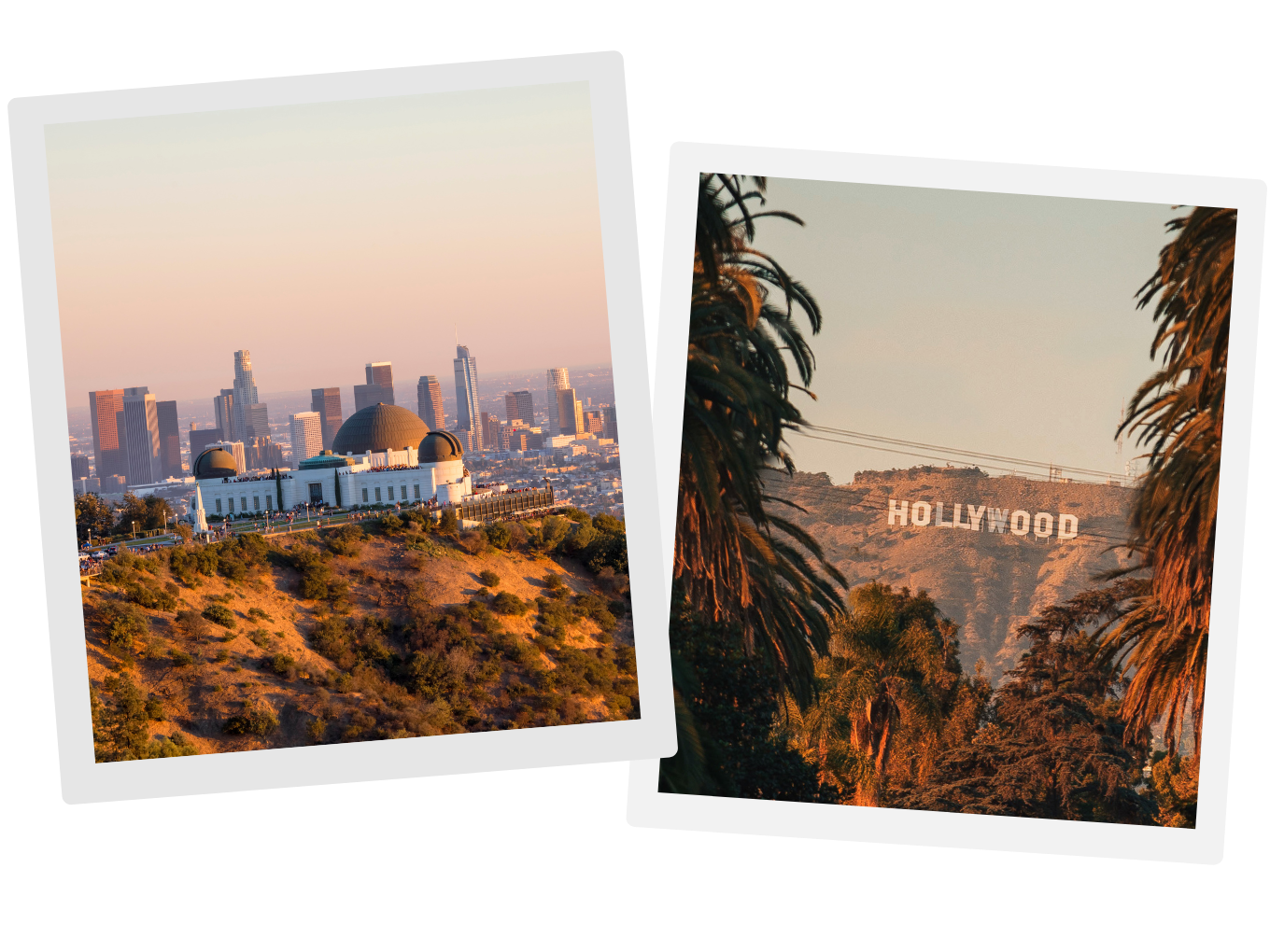 There are several exhibits in Griffith Observatory, including many telescopes, the Ahmanson Hall of the Sky, the Wilder Hall of the Eye, the Edge of Space, and much more.

The Zeiss telescope, accessible to all on clear nights, is a great way to experience the Moon and other planets up-close!

The iconic Hollywood sign is located on Mount Lee, but it’s best viewed from a distance from Griffith Park! 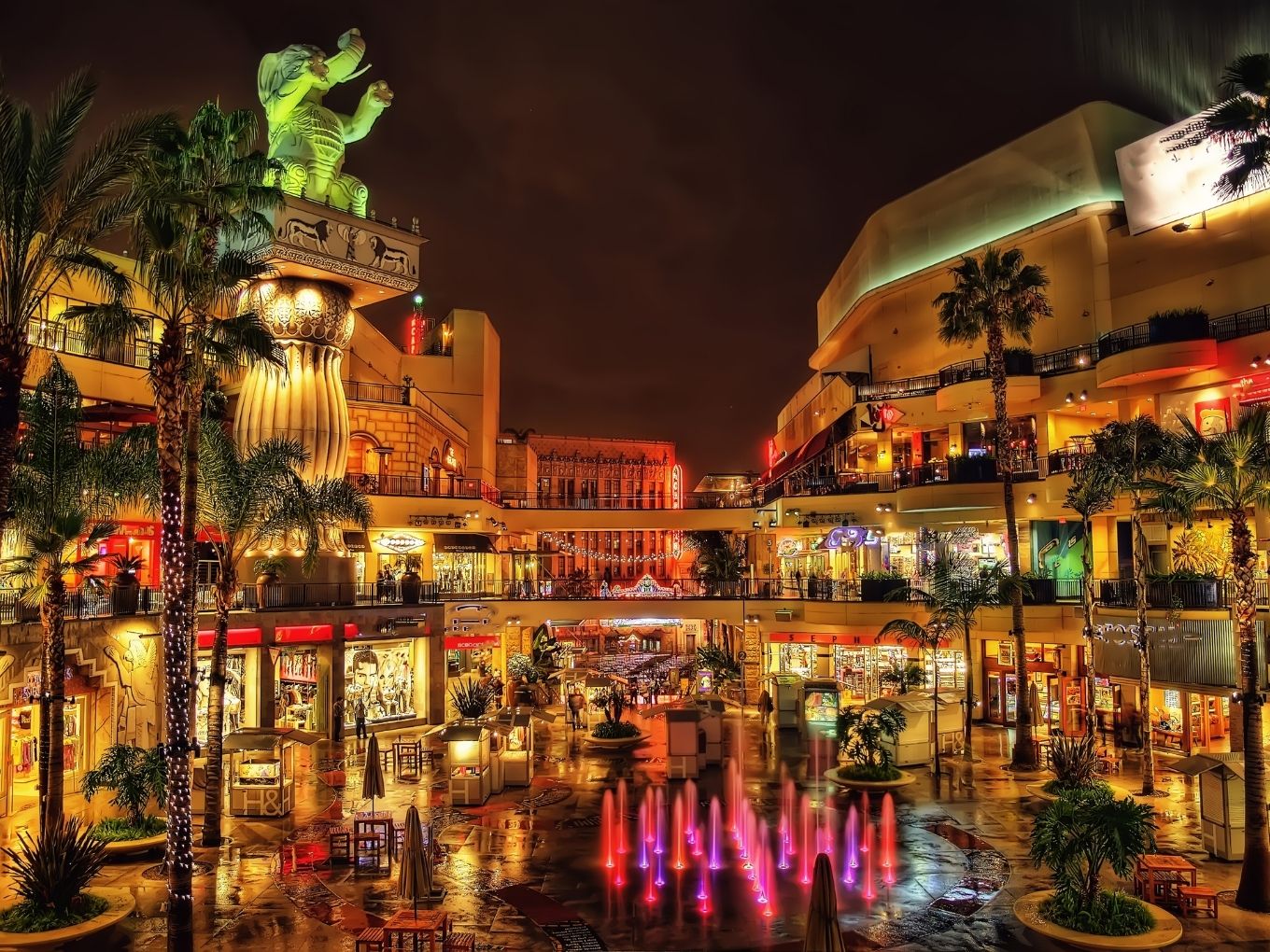 Most of the attractions in Hollywood are closely associated with the film industry. The Hollywood Boulevard, which runs between La Brea Ave. and Vine St., is the main attraction lined up with iconic landmarks, historic venues, museums, restaurants, and souvenir shops.

Dolby Theatre: The Dolby Theater on Hollywood Boulevard is a huge auditorium hosting several live performances and is home to the prestigious Academy Awards. To explore the theater from inside, you would need to do the theater tour or watch a show playing in the Dolby Theatre.

Guinness Museum: This is another impressive museum on Hollywood Boulevard featuring world records, including a replica of the world’s tallest man, the world record for the longest long jump, and many more.

There are a ton of things to do on Hollywood Boulevard, and it can take a couple of days to see everything! 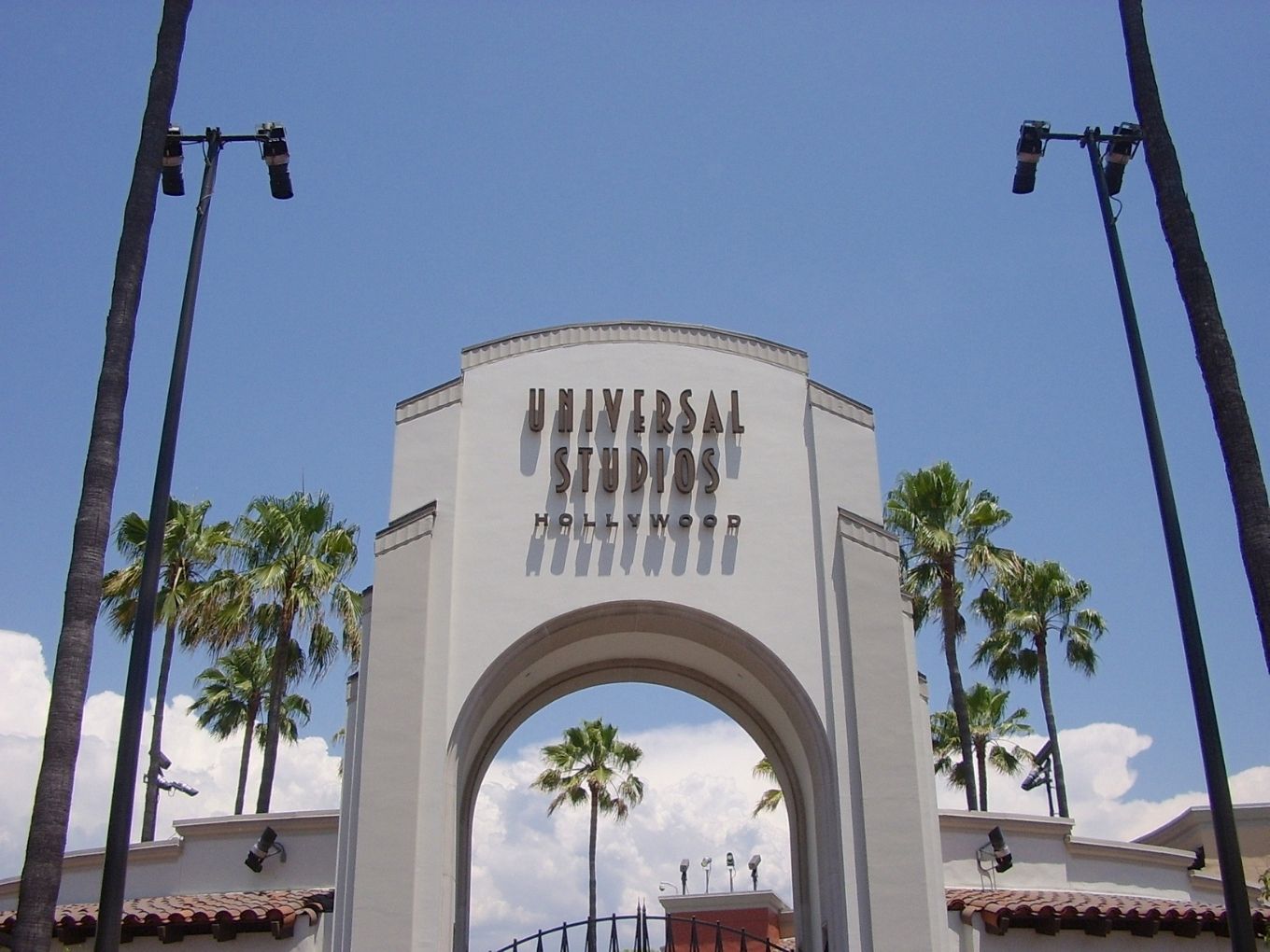 There’re some great theme parks in Los Angeles for thrill-seekers!

Disneyland: Disneyland, a park entirely designed by Walt Disney himself, is where the fairy tales come true! Located in Anaheim, a short drive from Los Angeles, Disneyland is home to two wonderful theme parks – Disneyland Park and California Adventure Park.

Disneyland Park is more family-friendly, with rides and attractions that have a wider audience – children to adults, and California Adventure Park has more thrill rides, mostly for adults. However, I recommend visiting both the parks and for sure the parade and the fireworks. Disneyland Address: 1313 Disneyland Dr, Anaheim, CA 92802. 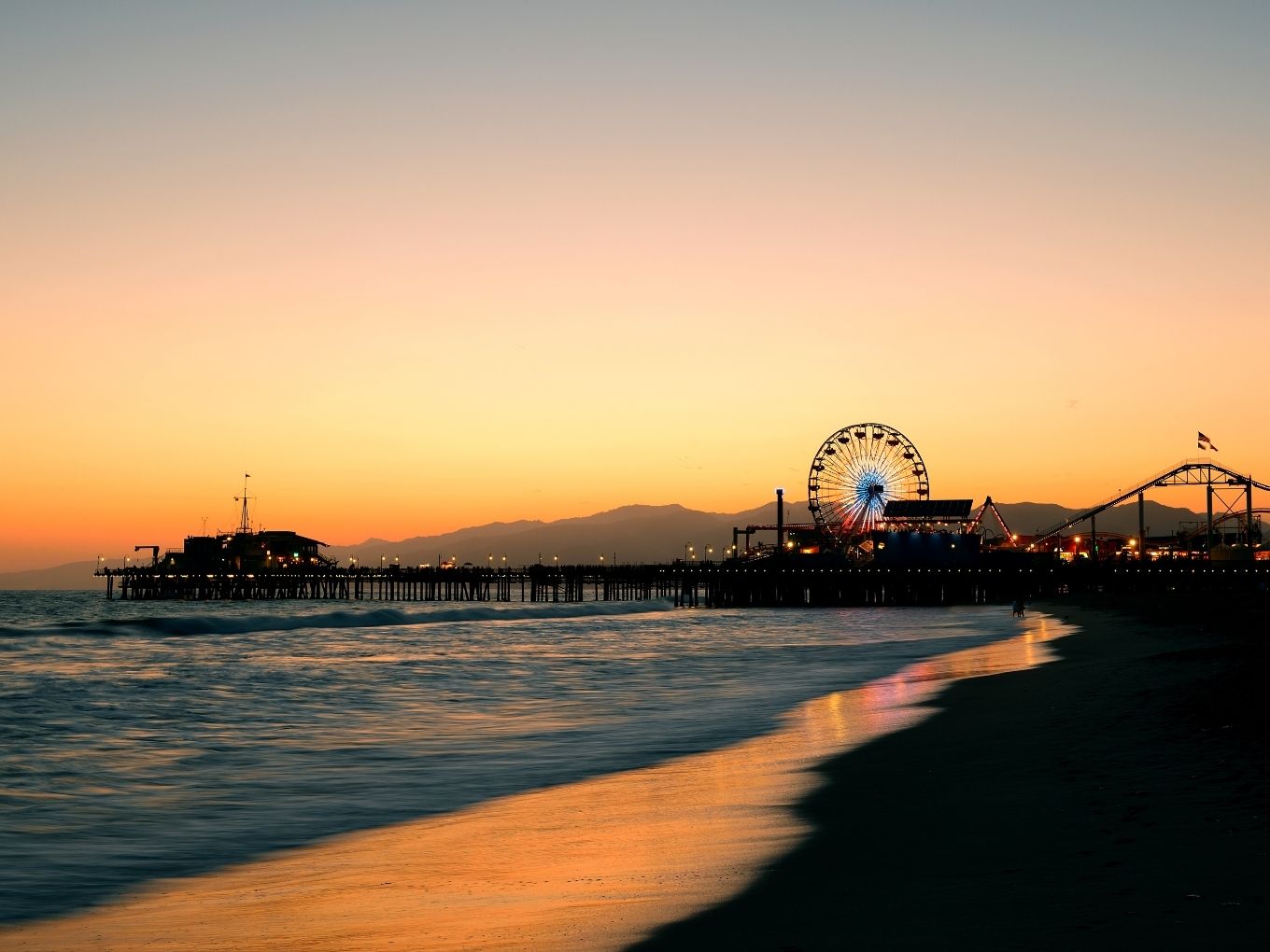 Los Angeles is home to some of the finest beaches in the US!

Los Angeles enjoys several miles of beautiful golden beaches, and with the perfect year-round weather, it’s a paradise for beach lovers and surfers! You can surf, swim, stroll, or simply soak up the sun at one of the many gorgeous beaches in Lost Angeles.

Venice Beach: Venice Beach is a beautiful city beach, with a vibrant boardwalk lined up with several shops, restaurants, and street performers. Here you will also find a Skatepark, very popular amongst skateboarders, and Muscle Beach, a popular place for bodybuilders to workout by the beach. Venice Beach Address: 1800 Ocean Front Walk, Venice, CA 90291.

Long Beach: Long Beach is actually a lovely beach town located 25 miles from Los Angeles and is home to some stunning beaches, including Long Beach City Beach, Junipero Beach, Mothers Beach, and Bayshore Beach. However, there is a lot more to see in Long Beach beside the beaches, and you will need a couple of days to explore all of Long Beach. The other popular attractions in Long Beach include the Aquarium of the Pacific, The Queen Mary, and the charming Naples neighborhood. Long Beach also servers as a gateway to the Catalina Islands, with ferries departing from the Long Beach Catalina Island Ferry Terminal. 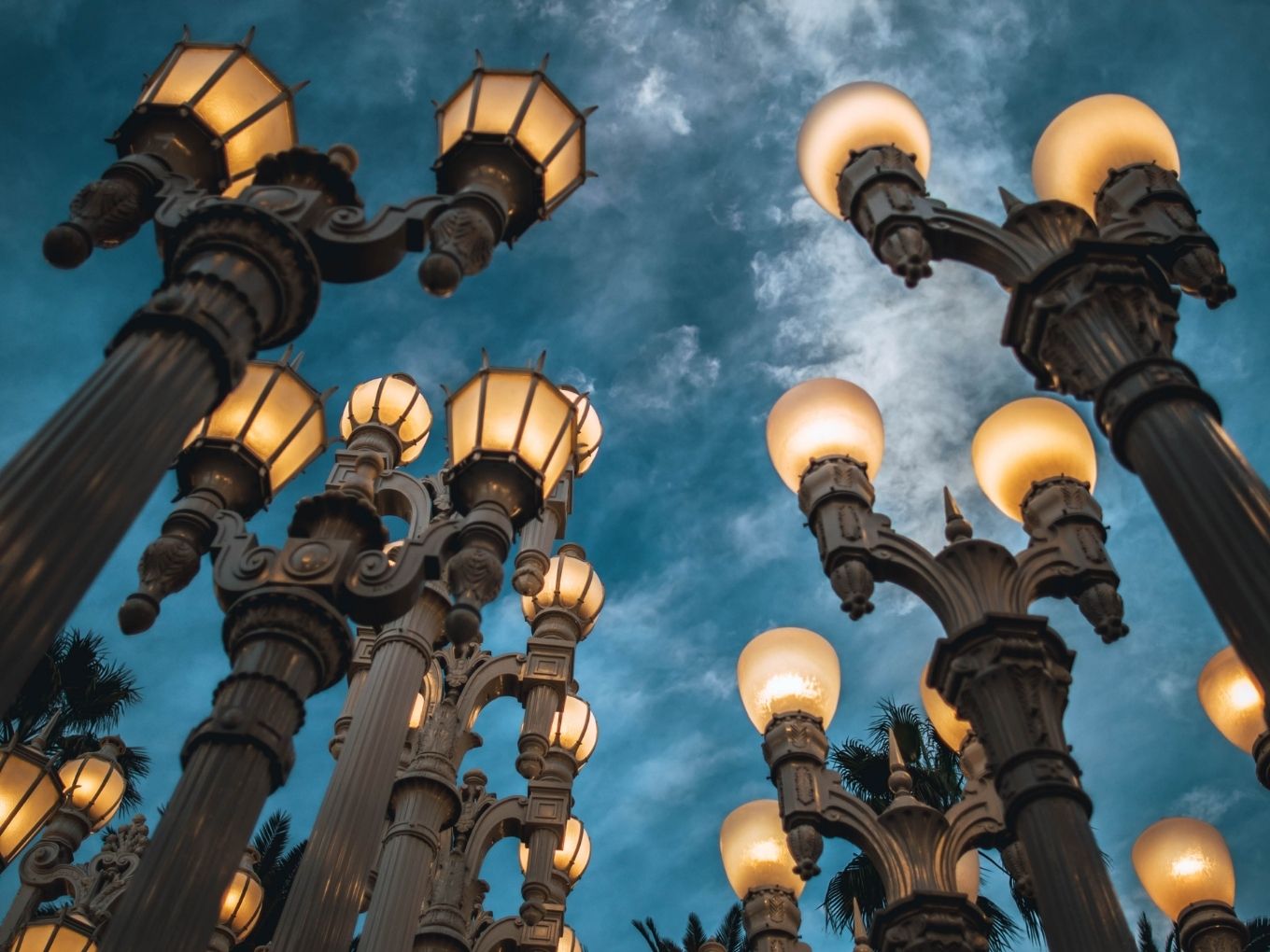 Los Angeles is home to many more museums besides those in Hollywood, which I have covered in the section above. If you are a history buff or love art, you should definitely visit a few museums in Los Angeles.

Here are my favorite Museums in Los Angeles

Los Angeles County Museum of Art: Home to Los Angeles’s iconic Urban Light, Chris Burden’s masterpiece made of 202 street lamps gathered from all around Los Angeles, is a huge museum complex, and also known as LACMA. The vast collection of LACMA includes an array of arts, books, ceramics, manuscripts, sculptures from all over the globe. LACMA Address: 5905 Wilshire Blvd., Los Angeles, CA 90036.

The Broad: Named after its founders Eli and Edythe Broad, The Broad Museum has a massive collection of contemporary art. The Broad Address: 221 S Grand Ave, Los Angeles, CA 90012. 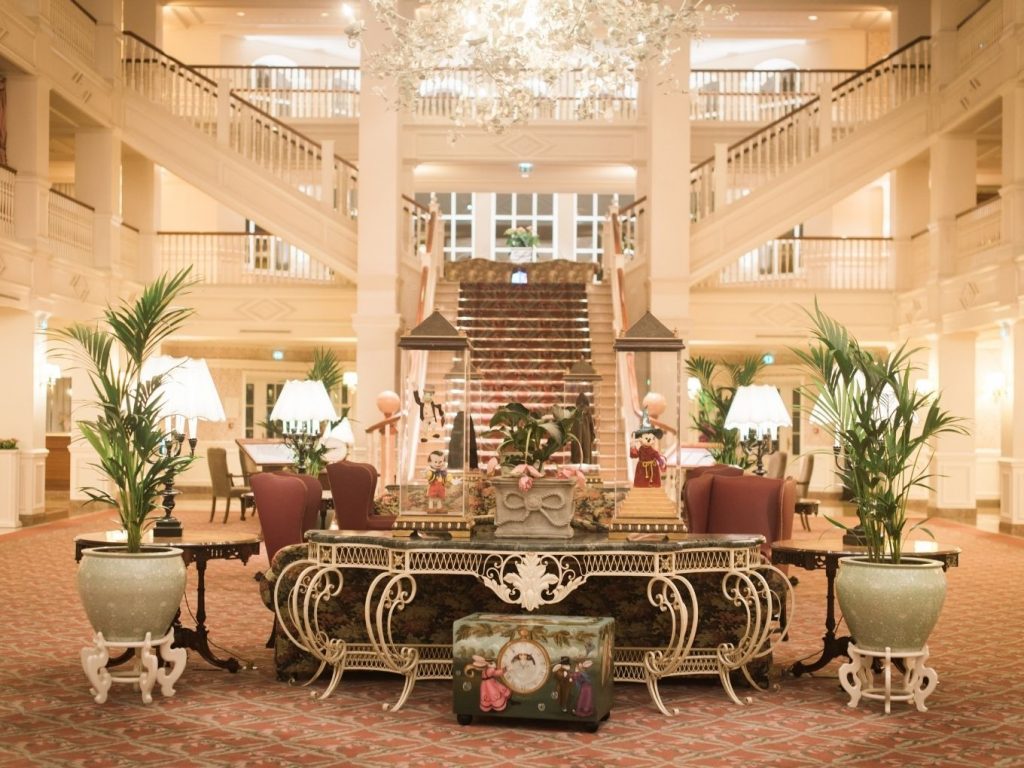 Los Angeles is a sprawling city with attractions spread all around the city. However, being a popular tourist destination, there are several boutique hotels, resorts, and other lodging options catering to all needs.

I recommend staying close to the attraction you plan to visit in Los Angeles.

There are a few other excellent hotels in Anaheim, including Hilton Anaheim, Anaheim Marriott, and Hampton Inn & Suites Anaheim Resort Convention Center.

Hotels Close to Los Angeles Beaches: If you’re looking to get away from the city’s hustle-bustle and stay close to a beach, you will find plenty of options in Los Angeles. Santa Monica – Hotel Casa del Mar and Shutters on the Beach. Long Beach – Hotel Maya and Hilton Long Beach.

While visiting the many attractions of Los Angeles, you most likely will be dining in the restaurants close to the attractions. So, I will highlight the best restaurants you can try when visiting a particular neighborhood or attraction in Los Angeles.

Griffith Park: The Cafe at the End of the Universe is a good option if you’re planning to dine inside Griffith Observatory. Located on the lower level, the cafe serves proper sitdown meals, quick bites, and has ample seating both indoors and outdoors.

Hollywood Boulevard: There are endless dining options in Hollywood Boulevard, ranging from popular chain restaurants to specialty dining. Here are my top picks – Hollywood Thai Restaurant for some great Thai food, Te’Kila for Mexican food, Mama Shelter, a rooftop restaurant with stunning views, and Hollywood Burger for a quick bite.

Disneyland: There are numerous dining options in both the Disneyland parks, including cafes, icecream parlors, pizza places, burger joints, and fine dining experiences with your favorite Disney character. You will find the entire list of the restaurants on their website: Disneyland Park and California Adventure Park. I highly recommend using the Disneyland mobile app while visiting Disneyland to make restaurant reservations and order your food.

Venice Beach: The boardwalk at Venice Beach is flooded with restaurants and cafes. Charcoal Venice, High Rooftop Lounge, and The Sidewalk Cafe are some of my favorites. You will find the entire list of restaurants on the Venice Beach website.

Long Beach: There are a few excellent waterfront dining options in Long Beach, including Gilan Pizza & Grill, Louisiana Charlie’s, Tugboat Pete’s, and several others. You will find the entire list of oceanfront restaurants in Long Beach on the Shoreline Drive website. 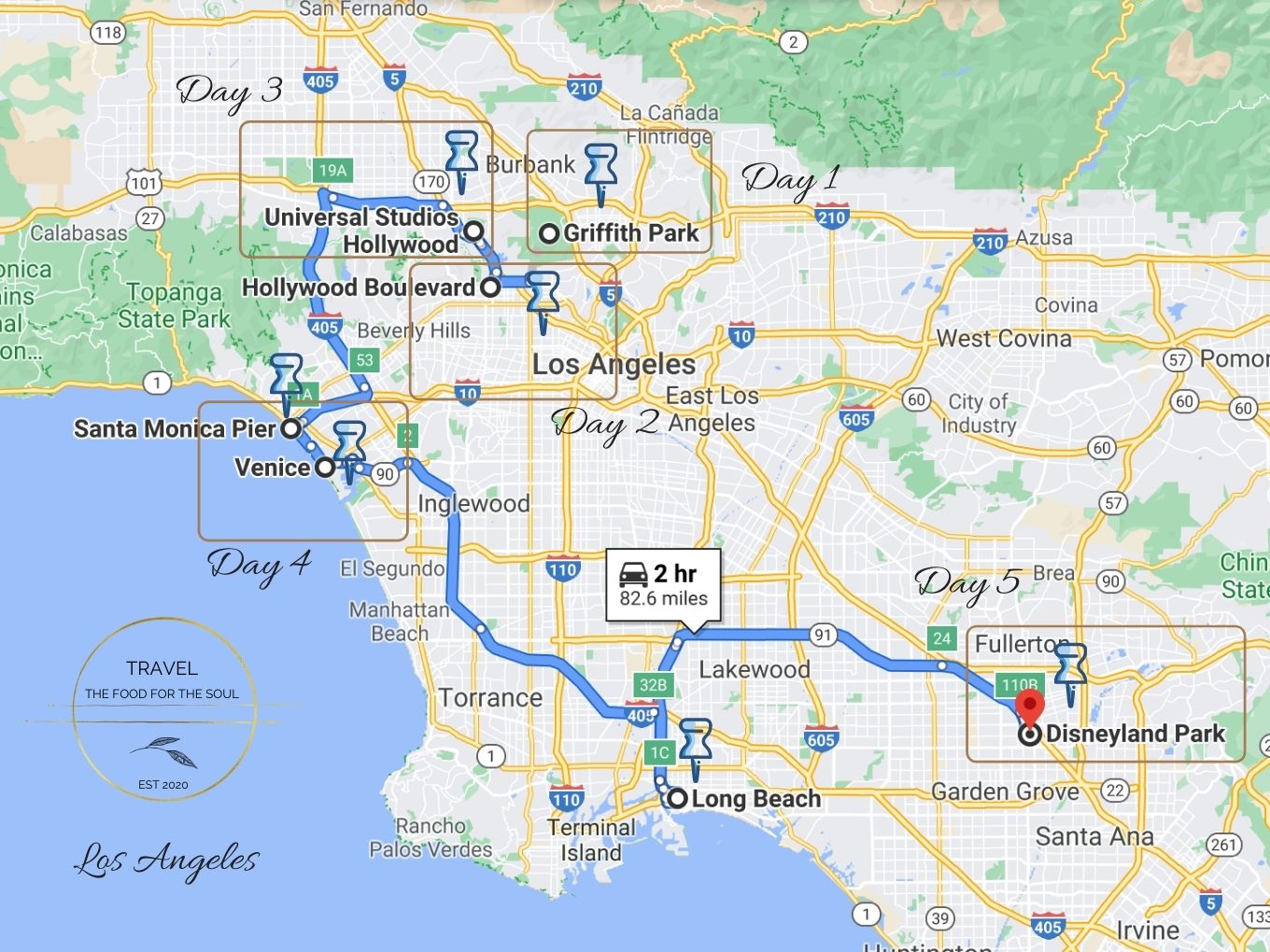 With so many things to see and do in Los Angeles, it becomes quite challenging to decide and plan all the activities and attractions for your trip to Los Angeles.

To help you plan your perfect trip to Los Angeles, I have compiled a sample five day Los Angeles trip itinerary!

Hollywood: Get your Hollywood fix by spending the entire day exploring the many attractions on Hollywood Boulevard:

There is a lot to see in Long Beach, and if you have time, I would recommend spending an entire day exploring the attractions in Long Beach, including several beaches, the Aquarium of the Pacific, and The Queen Mary.

I have tried to cover all major attractions in Los Angels, and you might find the itinerary a bit rushed and overwhelming, but you can tailor it per your needs. If you have more time, I highly recommend allocating an extra day at both the theme parks – Universal Studios Hollywood & Disneyland.

I also recommend purchasing a multi-attraction discounted pass from CityPASS and using the Big Bus Tours in Los Angeles. 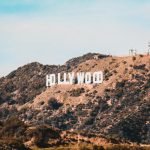 I hope you enjoyed reading the post, The Ultimate Guide To Los Angeles, and I hope this will help you plan your perfect trip to Los Angeles.