The Ultimate Guide To California Beaches

The Ultimate Guide To California Beaches 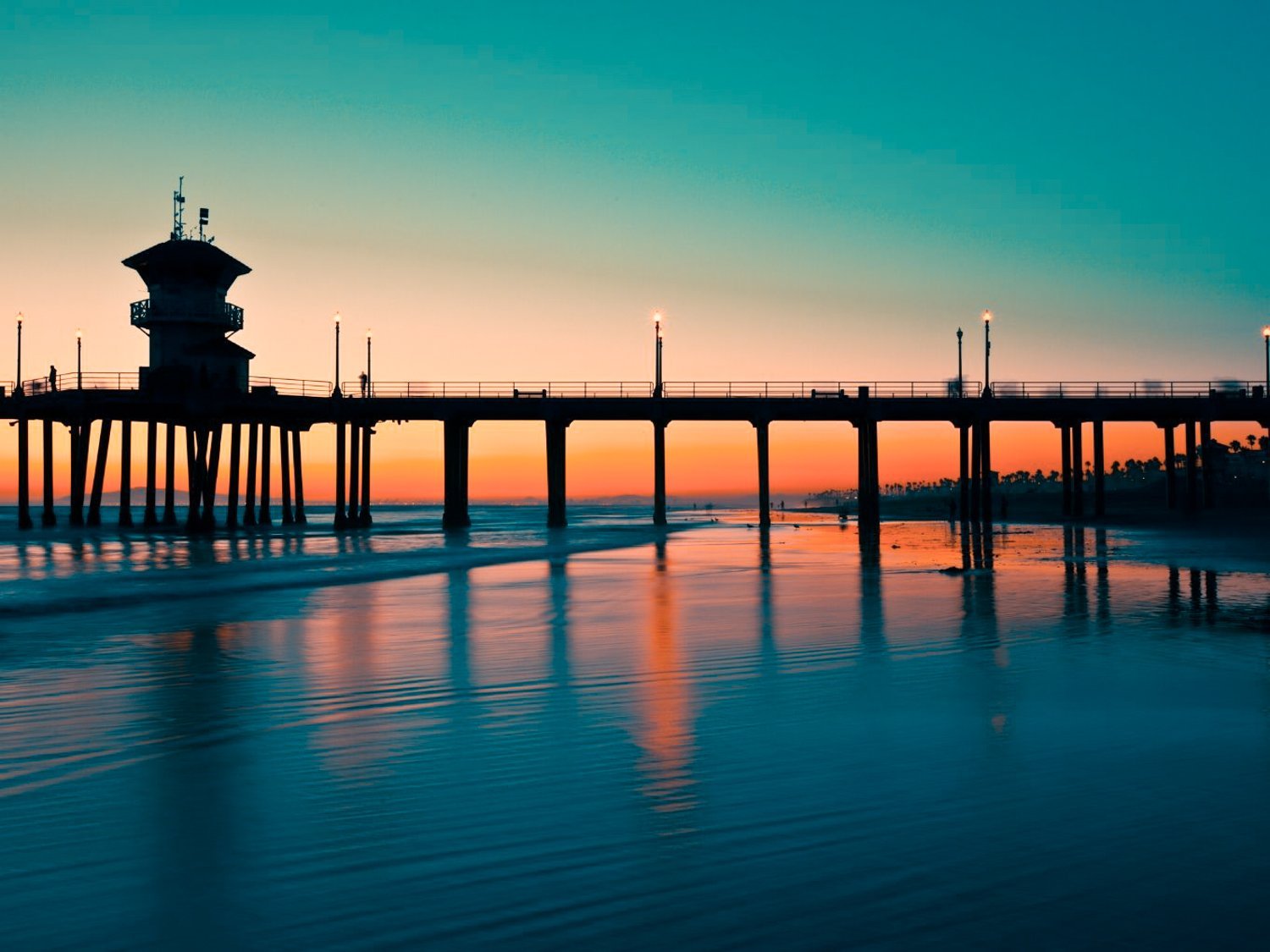 California is home to more than four hundred beaches!

Hugging the Pacific Ocean, California’s beautiful coastline measures around 800 miles and is home to more than 400 beaches!

Several miles of beautiful beaches and the perfect year-round weather make California a paradise for beach lovers and surfers! Whether you’re looking for a beach for sunbathing, surfing, playing beach volleyball, see some spectacular sunsets, grab a waterfront meal, enjoy rides by the ocean or simply stroll, California has a beach for you.

No trip to California is complete without seeing the dramatic Pacific Coastline and visiting a few gorgeous California beaches! The best way to visit all the beaches in California is by driving along the Pacific Coast Highway, starting from San Francisco going all the way to San Diego.

However, if you don’t have time to drive the entire Pacific Coast Highway, I still strongly recommend visiting at least a couple of beaches in California based on your interest.

With so many choices, it becomes quite challenging to decide which beaches to visit in California.

Here is my ultimate guide to California Beaches, featuring the most popular beaches in California, along with a map to help you pick the best beaches to visit on your trip to California!

It was quite difficult to pick the best beaches in California, as every beach is gorgeous and unique. However, I have narrowed down the list and highlighted California’s best beaches on the map above.

I have listed my top picks for the best beaches in California, sequentially starting at San Francisco going all the way to San Diego. 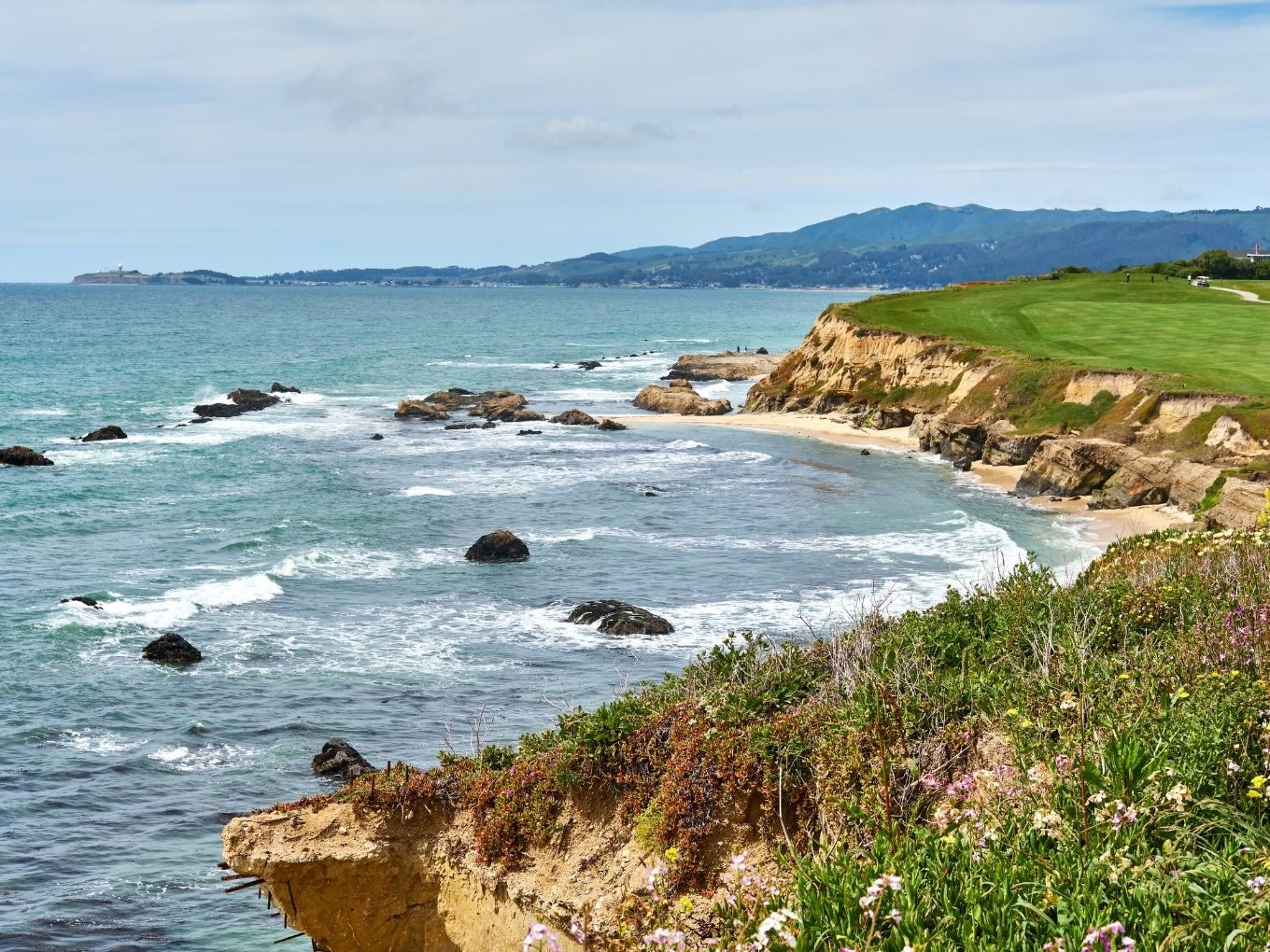 Half Moon Bay, named after the beautiful crescent-shaped seafront!

When visiting Half Moon Bay State Beach, you could also visit several other attractions in San Jose, including the Winchester Mystery House, Rosicrucian Egyptian Museum, The Tech Interactive, and more.

Read More: Things to do in San Jose, California 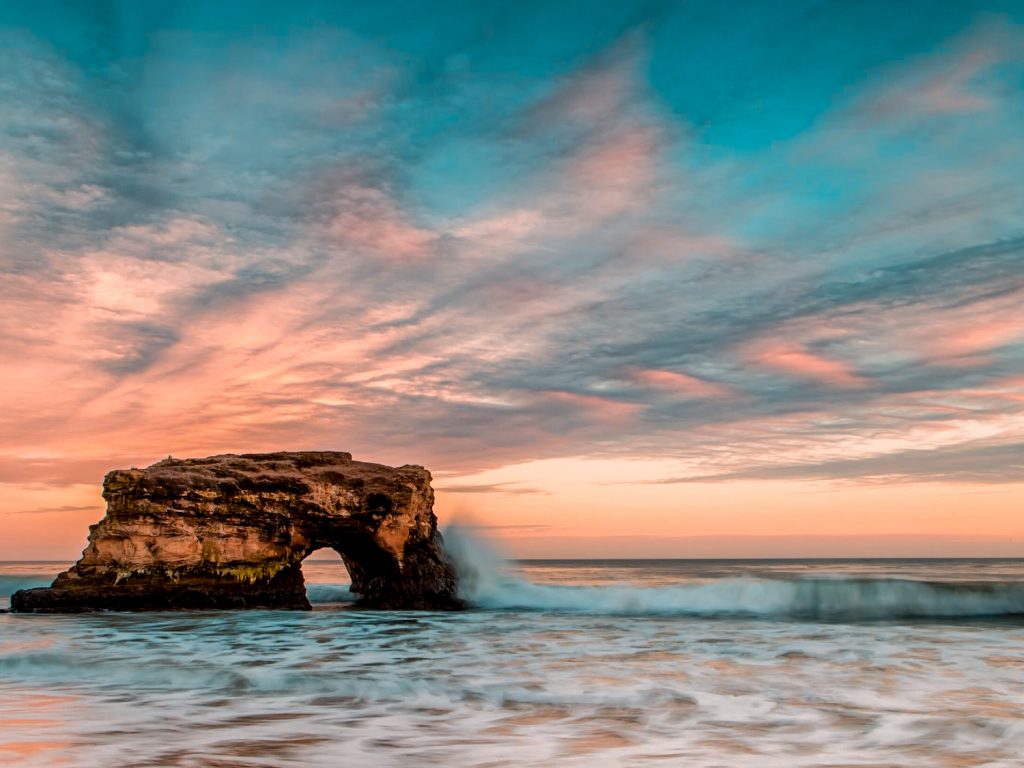 Santa Cruz, a beautiful coastal city, is also home to several other attractions, and it’s a good idea to spend some time in Sant Cruz when visiting Natural Bridges State Beach.

Read More: Things to do in Santa Cruz, California 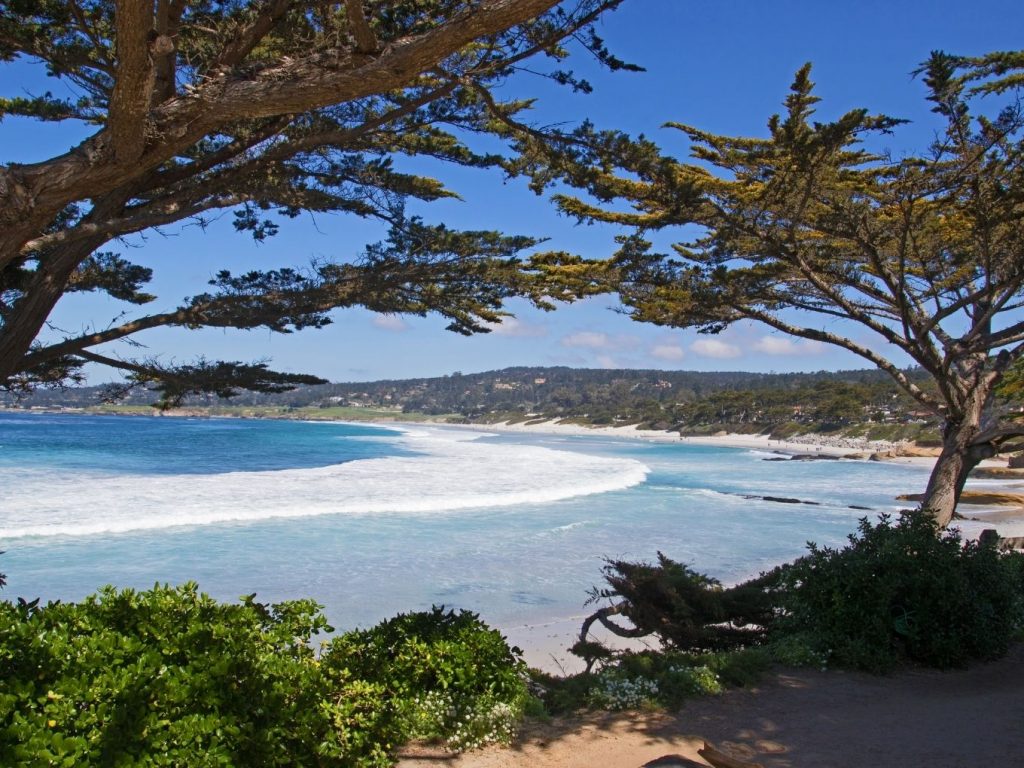 Carmel Beach, known for its white sand and cypress trees!

Carmel Beach, located in the city of Carmel-by-the-Sea in Monterey County, California, is popularly known for its fine white sand and majestic cypress trees. 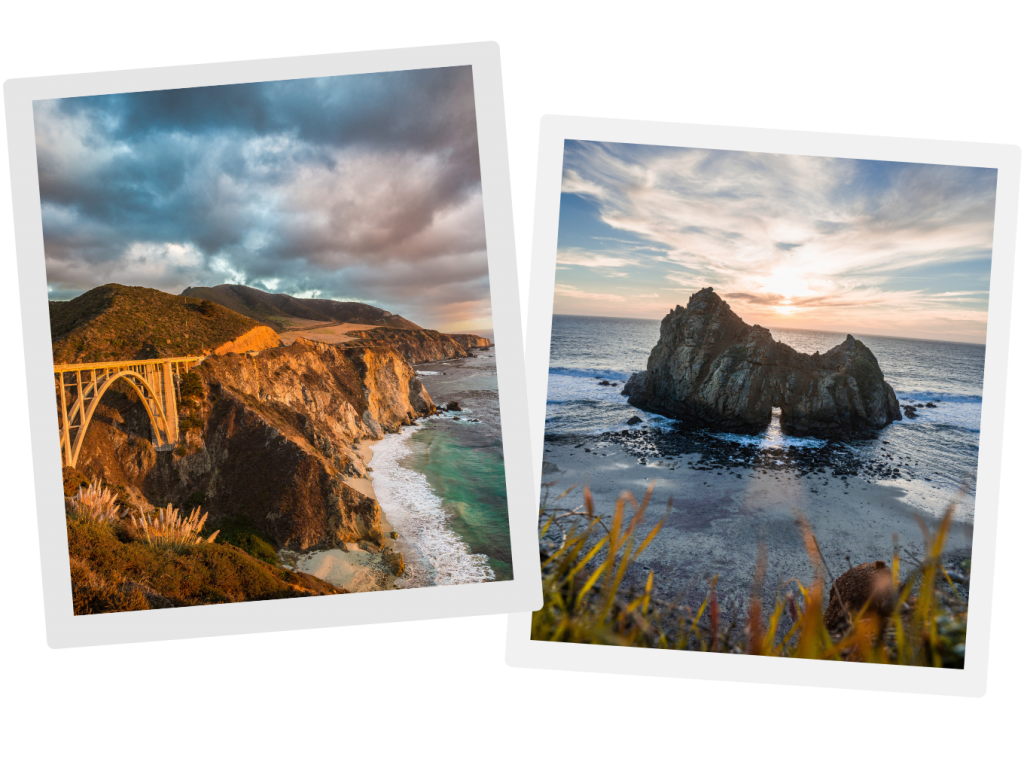 Pfeiffer Beach, in Big Sur, is hands-down one of the most unique beaches in California. The amazing purple sand, the sea caves, and the iconic Keyhole Arch rising from the sea bed is a one-of-a-kind experience! However, Pfeiffer Beach is located off the beaten path without proper signs on the road, so I highly recommend using the GPS address to get to Pfeiffer Beach. Pfeiffer Beach GPS Address: Lat: 36.2383, Long: -121.8123.

Big Sur is the most scenic stretch of the Pacific Coast Highway! There are several other awe-inspiring coastal views and vista points in Big Sur, and I highly recommend visiting them when visiting Pfeiffer Beach.

The vista points are listed in sequential order starting from Carmel, and I have marked and saved these points on Google Maps, which you can use on your phone’s app or a web browser – Big Sur Google Map.

Pismo State Beach is known for its coastal sand dunes and Monarch Butterfly Grove and is the only drivable beach in California! 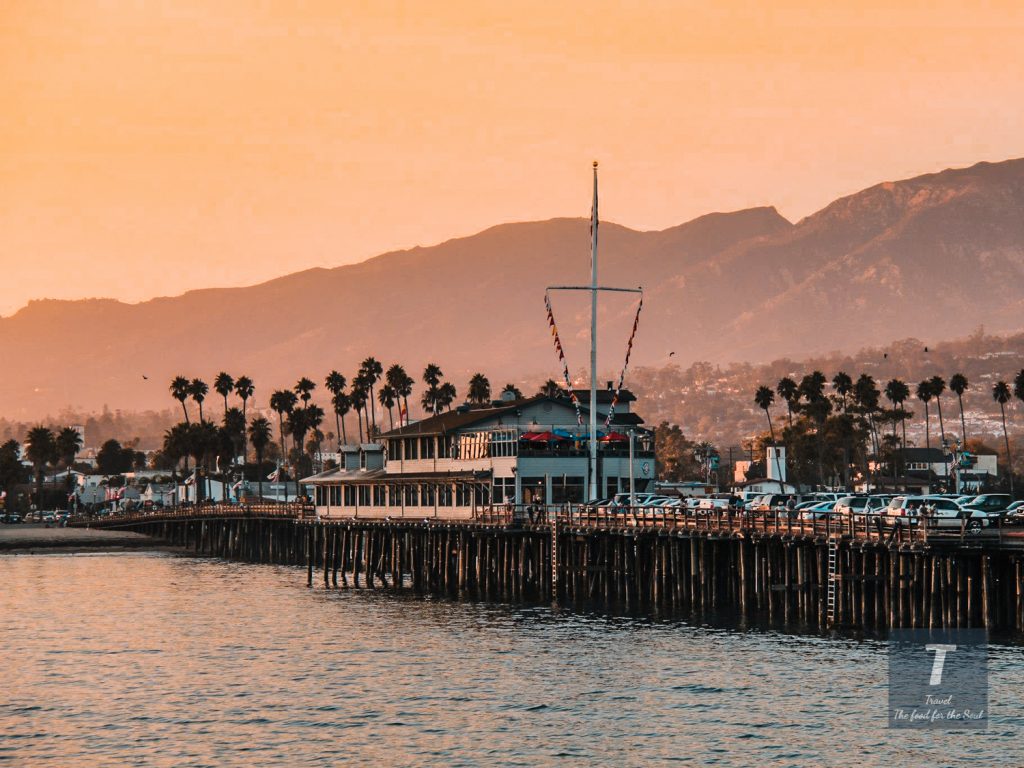 Santa Barbara, a lively coastal city with gorgeous beaches and a bustling downtown!

Santa Barbara is another beautiful coastal town in California, with several golden sandy beaches, including East Beach and West Beach, located on either side of the Stearns Wharf and Leadbetter Beach and Butterfly Beach are among other famous beaches in Santa Barbara.

Santa Barbara also has a lively pier and a vibrant downtown lined with boutique shops and restaurants. It’s a good idea to visit a few other Santa Barbara attractions when visiting the Santa Barbara beaches. 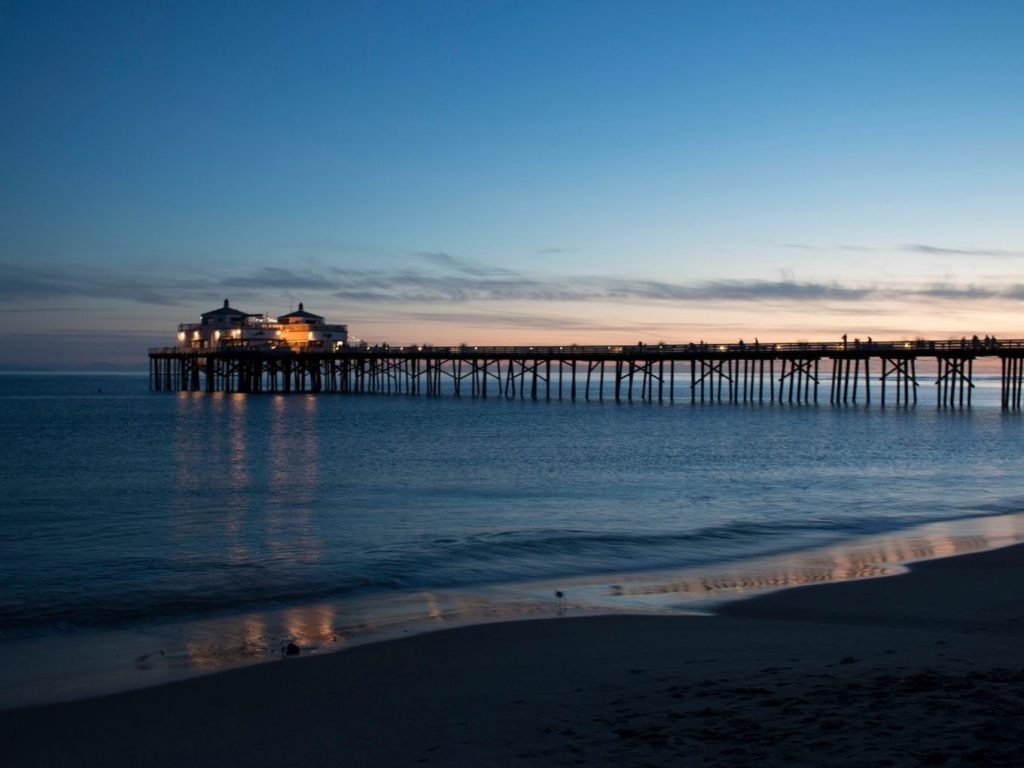 Malibu is a coastal city in California and popularly known for its beaches and celebrity mansions!

Several stars and celebrities own beautiful mansions in Malibu, and if you’re interested, there are guided star home tours available in Malibu. 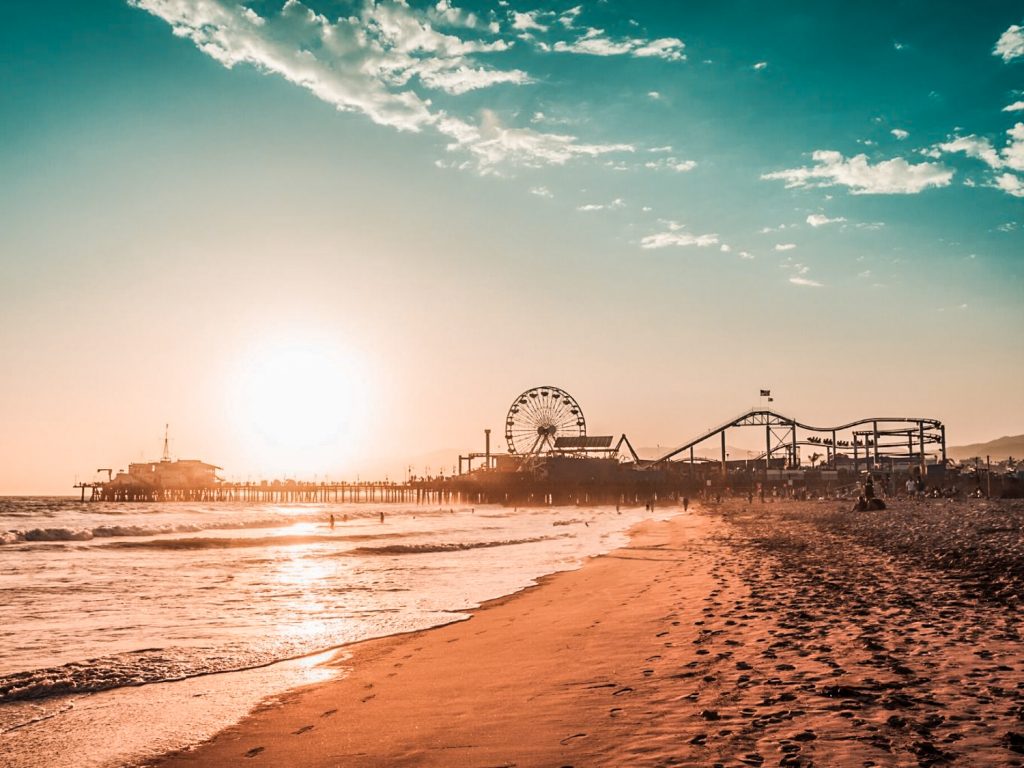 Santa Monica State Beach, in Santa Monica, is home to the Santa Monica Pier and is popularly known for its carnival rides, including the iconic Ferris wheel. 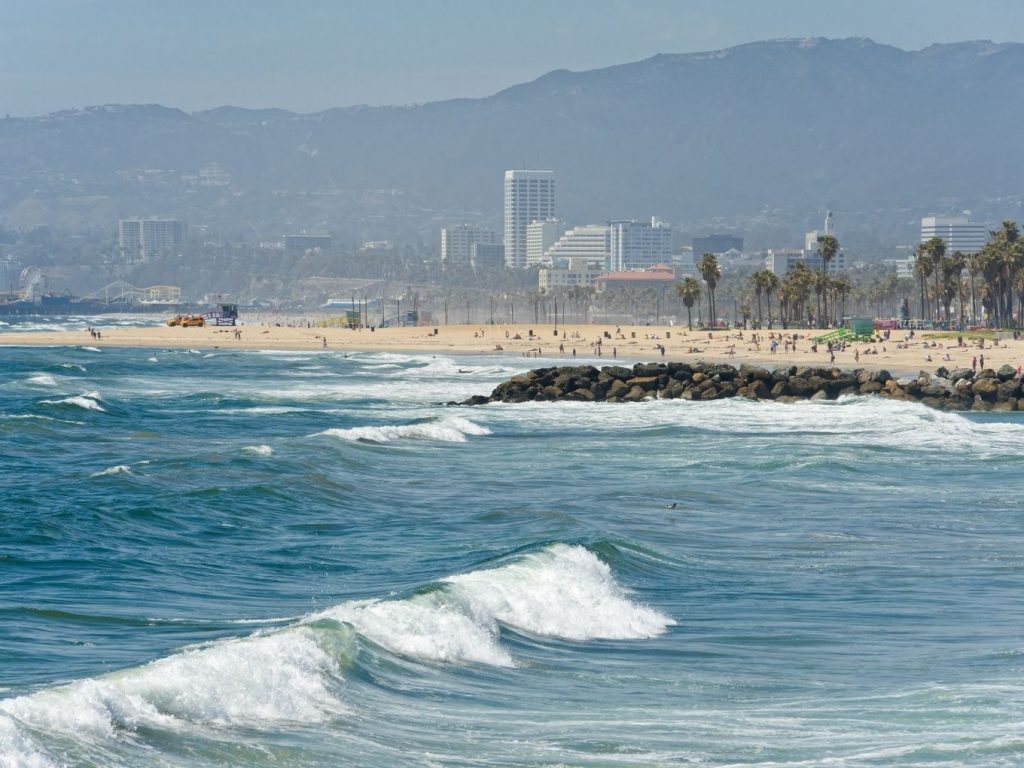 Venice Beach is a beautiful city beach, with a vibrant boardwalk lined up with several shops, restaurants, and street performers. Here you will also find a Skatepark, very popular amongst skateboarders, and Muscle Beach, a popular place for bodybuilders to workout by the beach. Venice Beach Address: 1800 Ocean Front Walk, Venice, CA 90291. 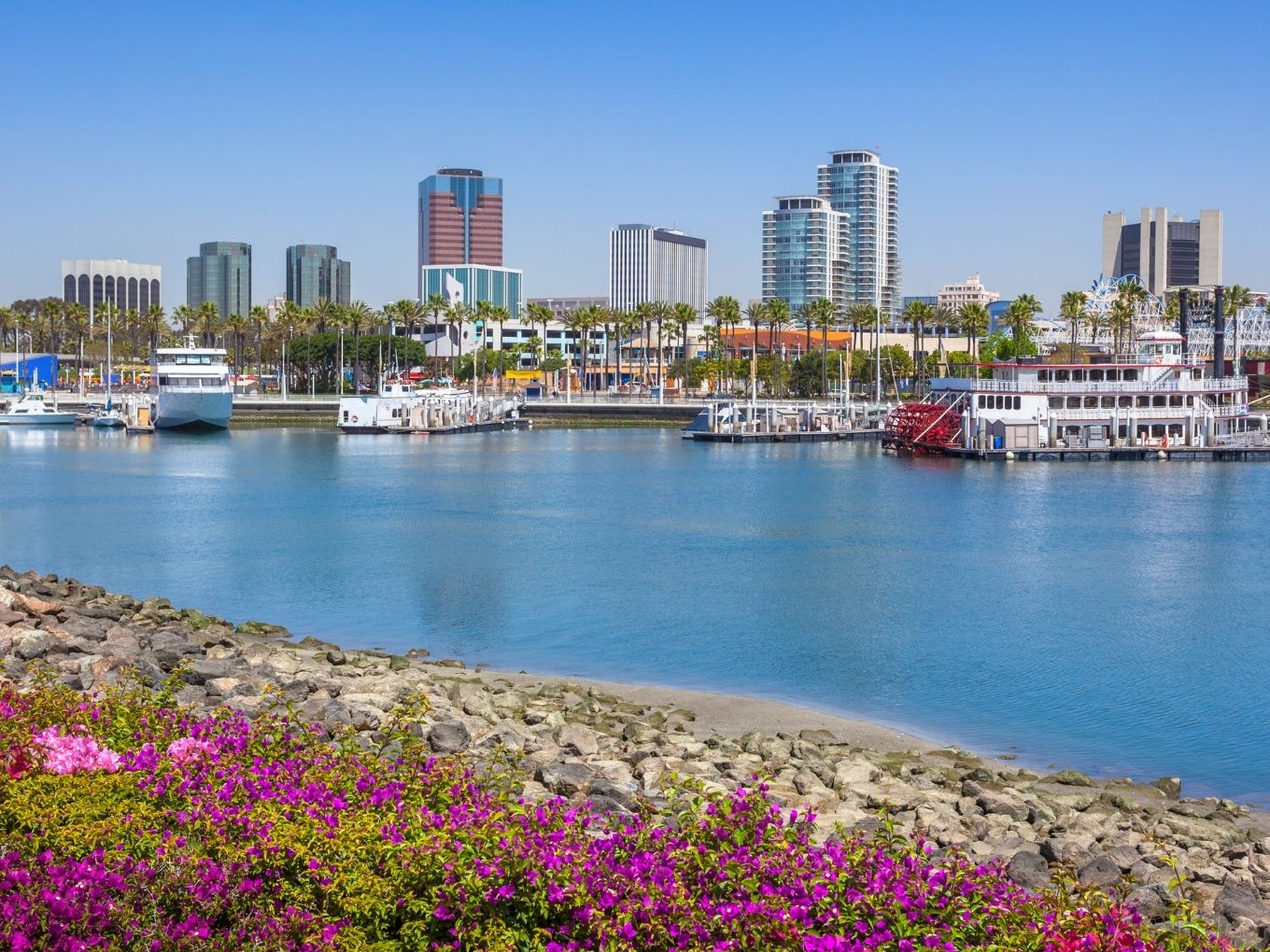 Long Beach is a lovely beach town with several beaches and home to the Aquarium of the Pacific and The Queen Mary!

However, there is a lot more to see in Long Beach beside the beaches, and you may very well need a couple of days to explore all of Long Beach.

The other popular attractions in Long Beach include the Aquarium of the Pacific, The Queen Mary, and the charming Naples neighborhood. Long Beach also servers as a gateway to the Catalina Islands, with ferries departing from the Long Beach Catalina Island Ferry Terminal.

Newport Beach is home to beautiful beaches, coves, and a shopping destination on the Pacific Coast Highway!

Other Attractions in Newport Beach 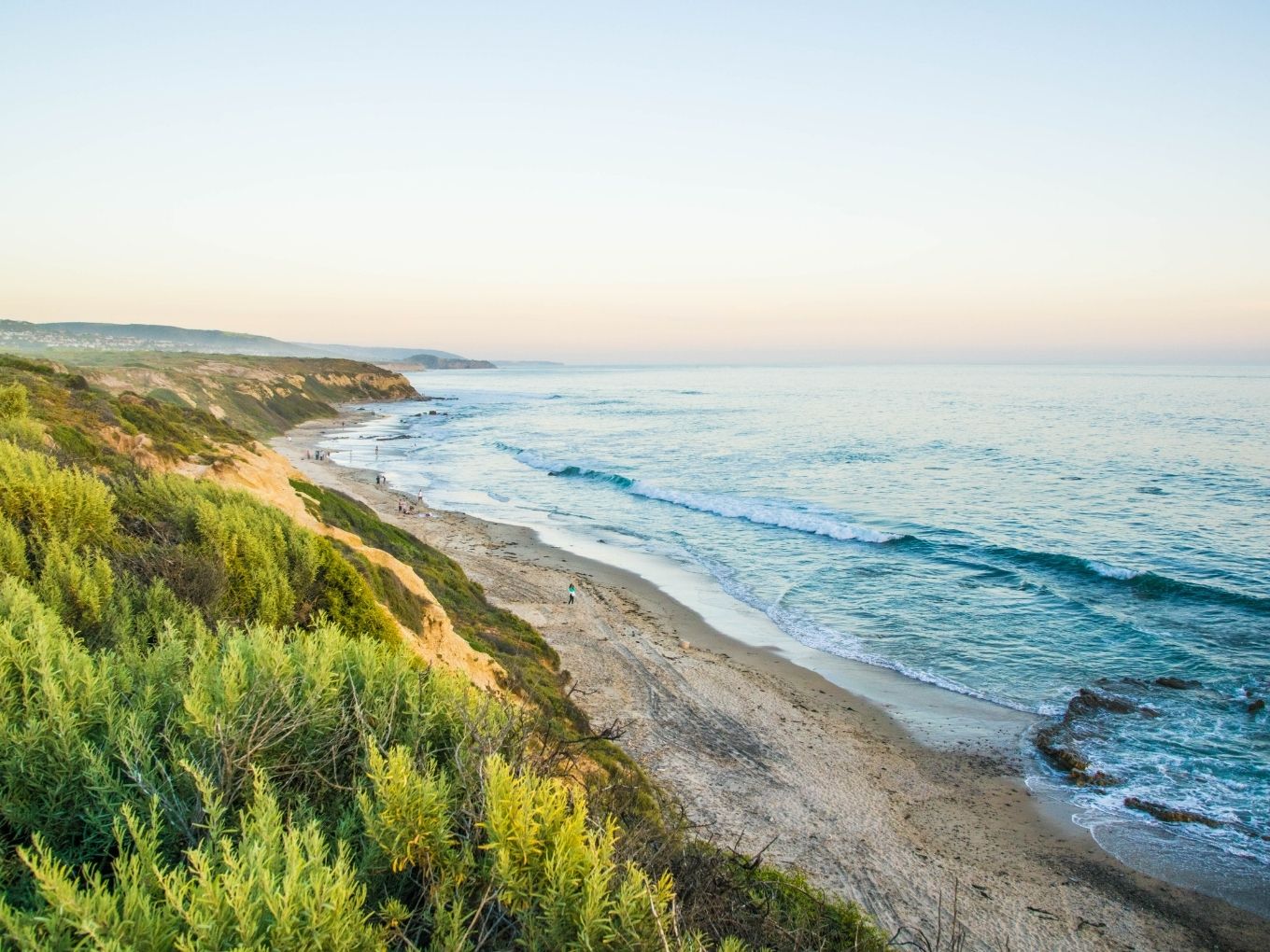 Main Beach is a gorgeous sandy beach located in the heart of Laguna Beach!

Other Places to See in Laguna Beach 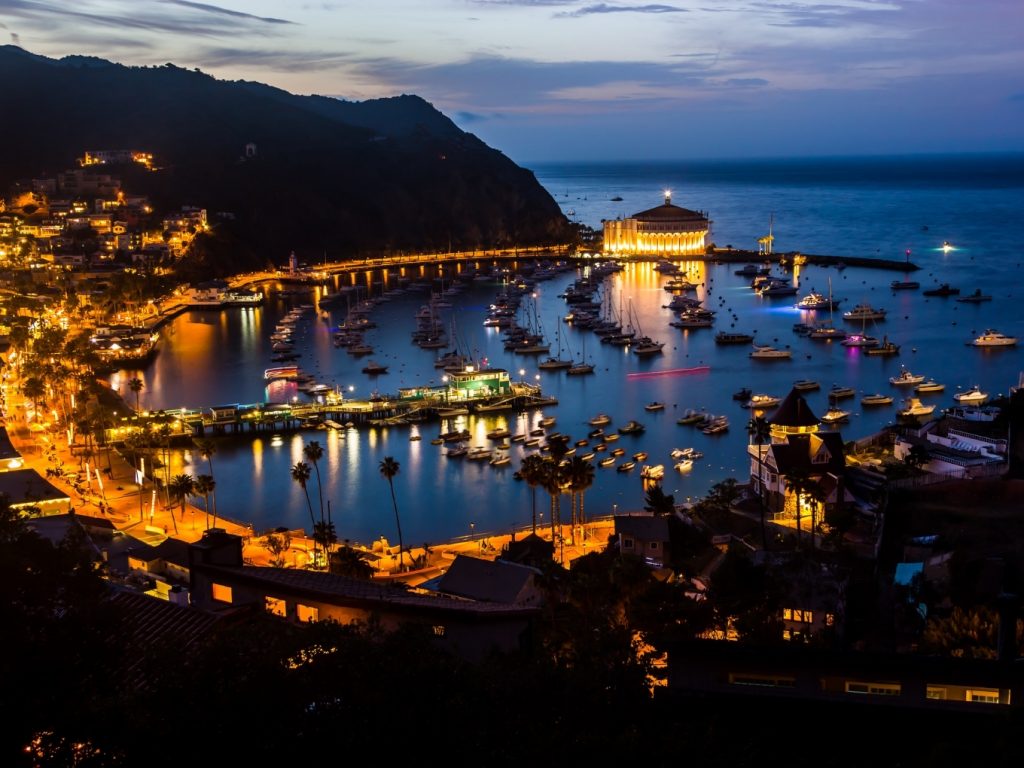 Catalina Island is home to some of the most gorgeous and pristine beaches in the US!

More commonly known as Catalina Island, Santa Catalina Island is an island off the shore of southern California, located just 22 miles south-southwest of Los Angeles. The Island is small in size, but it’s beautiful! It’s about 20 miles long and approximately 48,000 acres (about 76-square miles) in area.

Public beaches include South Beach, Middle Beach located either side of the Green Pleasure Pier, Step Beach located near the Via Casino Arch, Pebbly Beach located past the ferry terminal. Private Beach: Descanso Beach, though a private beach, is accessible to the public for a minimal fee, offers dining, chaise lounges, and cabana rentals.

There are several other attractions in Catalina Island besides beaches, including museums, wildlife, golf, spas, land & boat tours, make it a must-see in California. 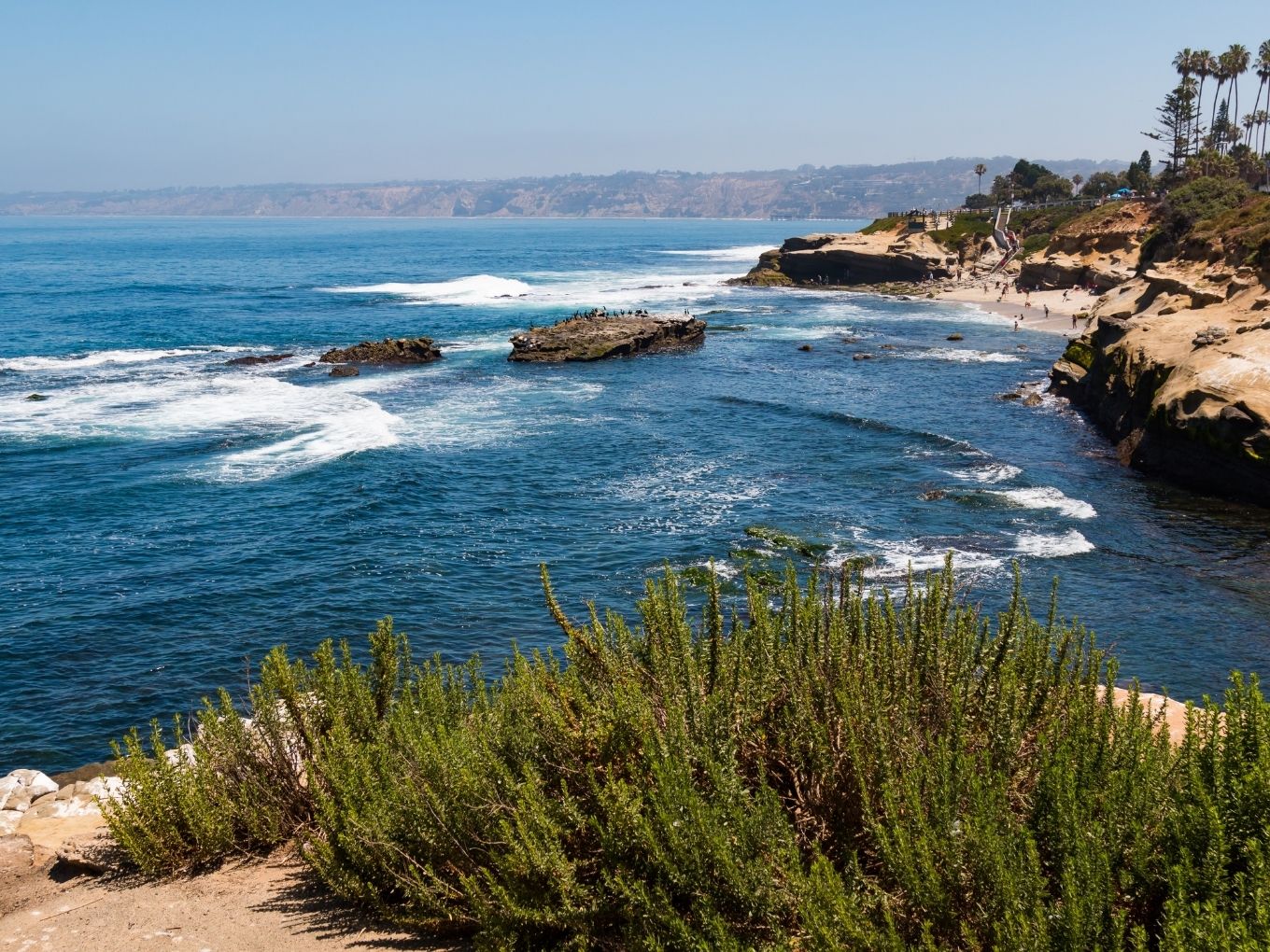 La Jolla Cove is a small gorgeous beach snuggled between sandstone cliffs in La Jolla and is one of the most visited and photographed beaches in California.

You can see the sea caves located along the bluff by taking a guided kayak tour or visit the Cave Store, which has a human-made tunnel that goes inside the Sunny Jim Cave. La Jolla Cove Address: 1100 Coast Blvd. (at Girard Ave), La Jolla, CA 92037. 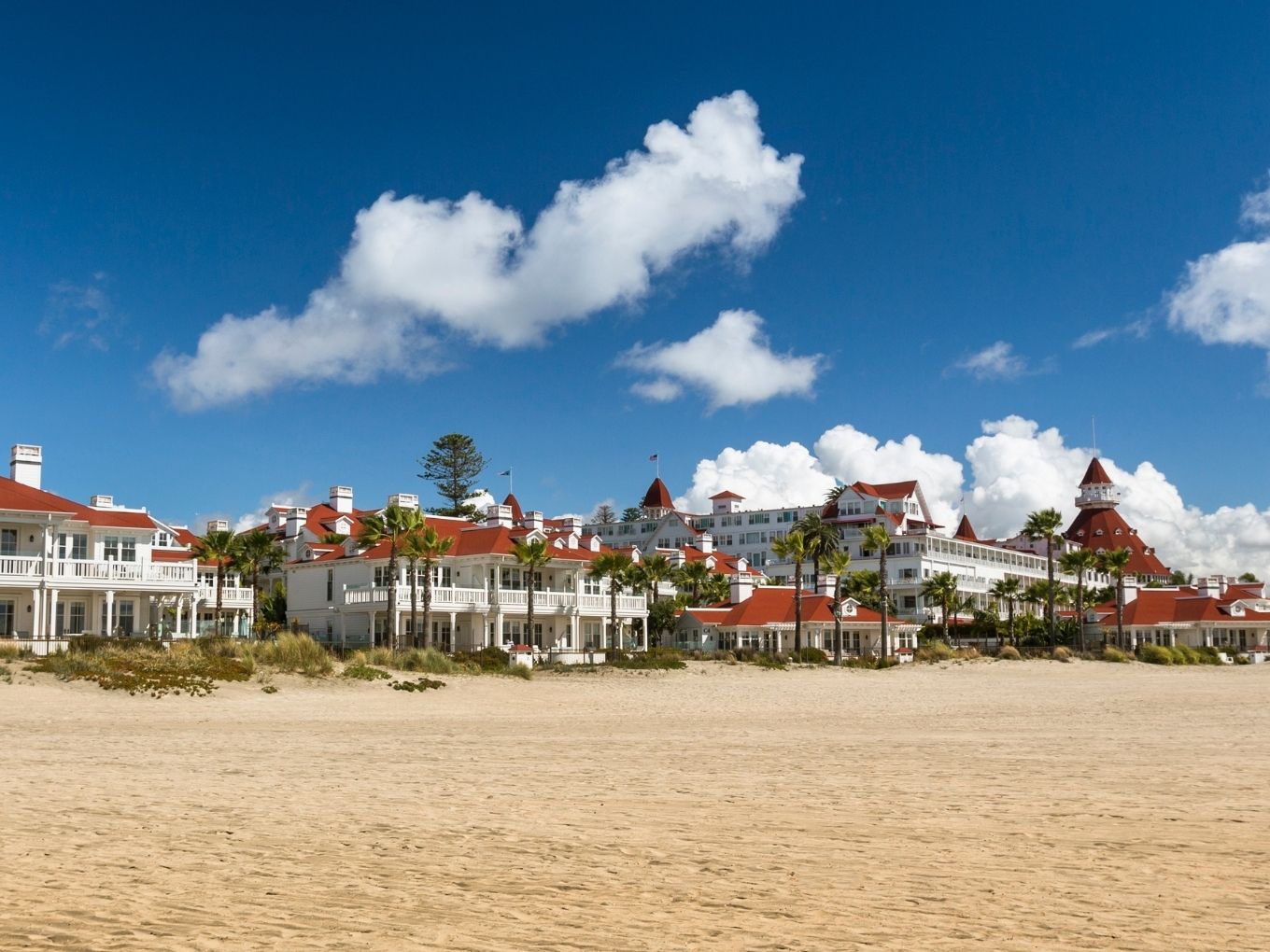 With the backdrop Hotel del Coronado, a historic beachfront hotel in Coronado, San Diego, Coronado Beach is a must-see in San Diego!

The sand in Coronado Beach literally glitters due to the mineral mica found in the sand. It’s an excellent place for a romantic getaway or a fun-filled family beach holiday. Coronado Beach Address: 1500 Orange Ave, Coronado, CA 92118.

There are several other attractions in San Diego, and I highly recommend visiting a few of them when visiting Coronado Beach.

I hope you enjoyed reading the post, The Ultimate Guide To California Beaches, and I hope this will help you pick the best beaches to visit on your trip to California!