The Ultimate Guide To Atlanta Downtown

The Ultimate Guide To Atlanta 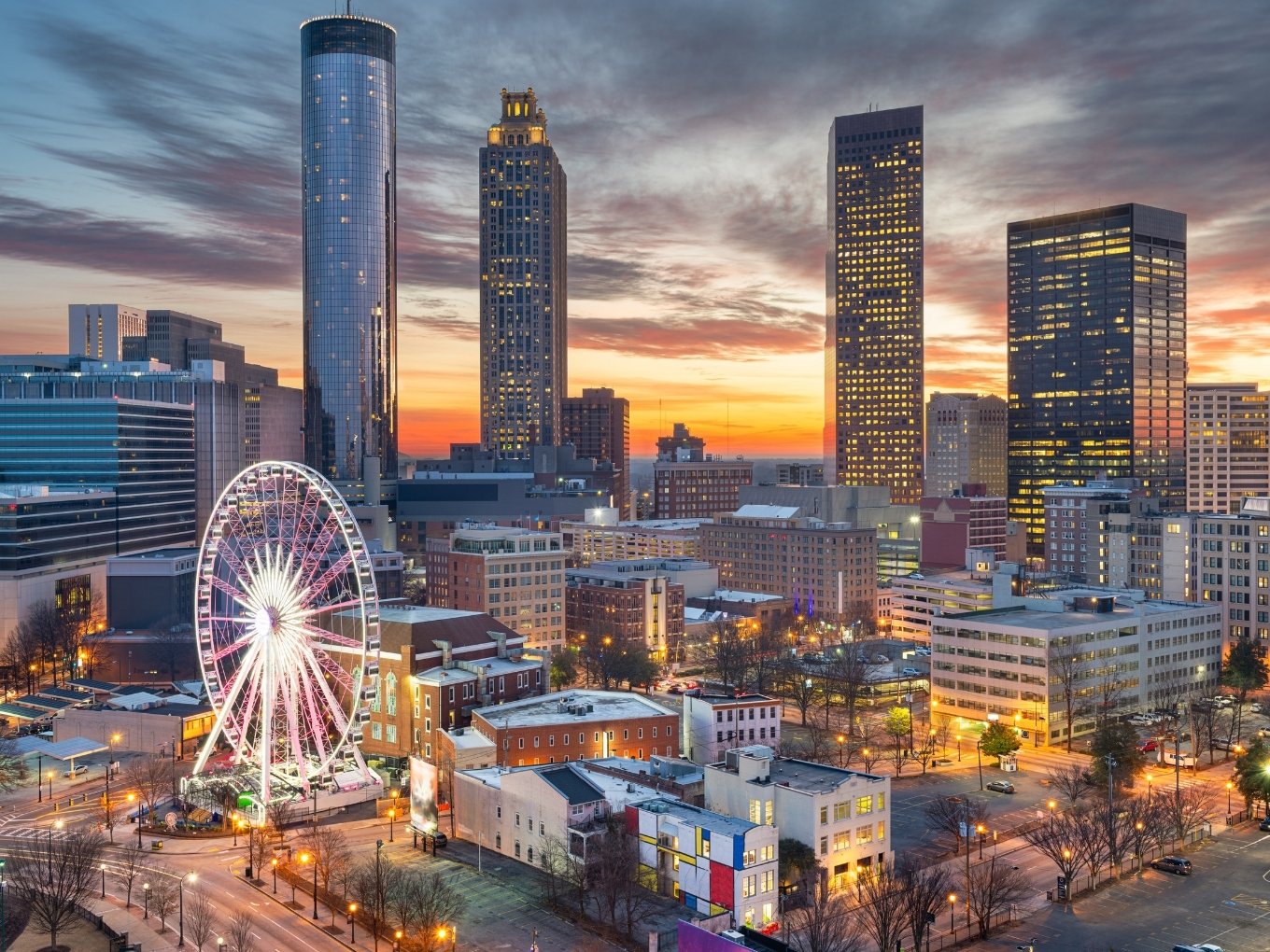 Atlanta, the capital of Georgia and a fast-paced metropolitan city of the south, is an amalgam of modern-day tourist attractions and southern charm!

The initial growth in Atlanta was due to the railroads connecting the south to the midwest, where Atlanta served as the terminus. Atlanta also played a significant role during the American Civil War, as it served as a center of military operations and as a distribution route. Atlanta still remains a major transportation hub in the southeast US, but several other industries, including manufacturing, biotechnology, information technology, media, and others, now lead the city’s growth. This industrialization has dramatically transformed the cityscape of Atlanta, giving the City its several skyscrapers, office building, and cultural diversity.

The city of Atlanta continues to charm its residents and lure visitors through its modern-day skyscrapers, multiple sports venues, several museums, some of the best shopping malls of the Nation, a world-class aquarium, many public parks, a zoo, and diverse culinary experiences. Though you might not find a lot of natural sceneries and wonders in Atlanta, the city’s vibrant cityscapes and several fun attractions make it a must-see in Georgia!

Planning Your Trip To Atlanta 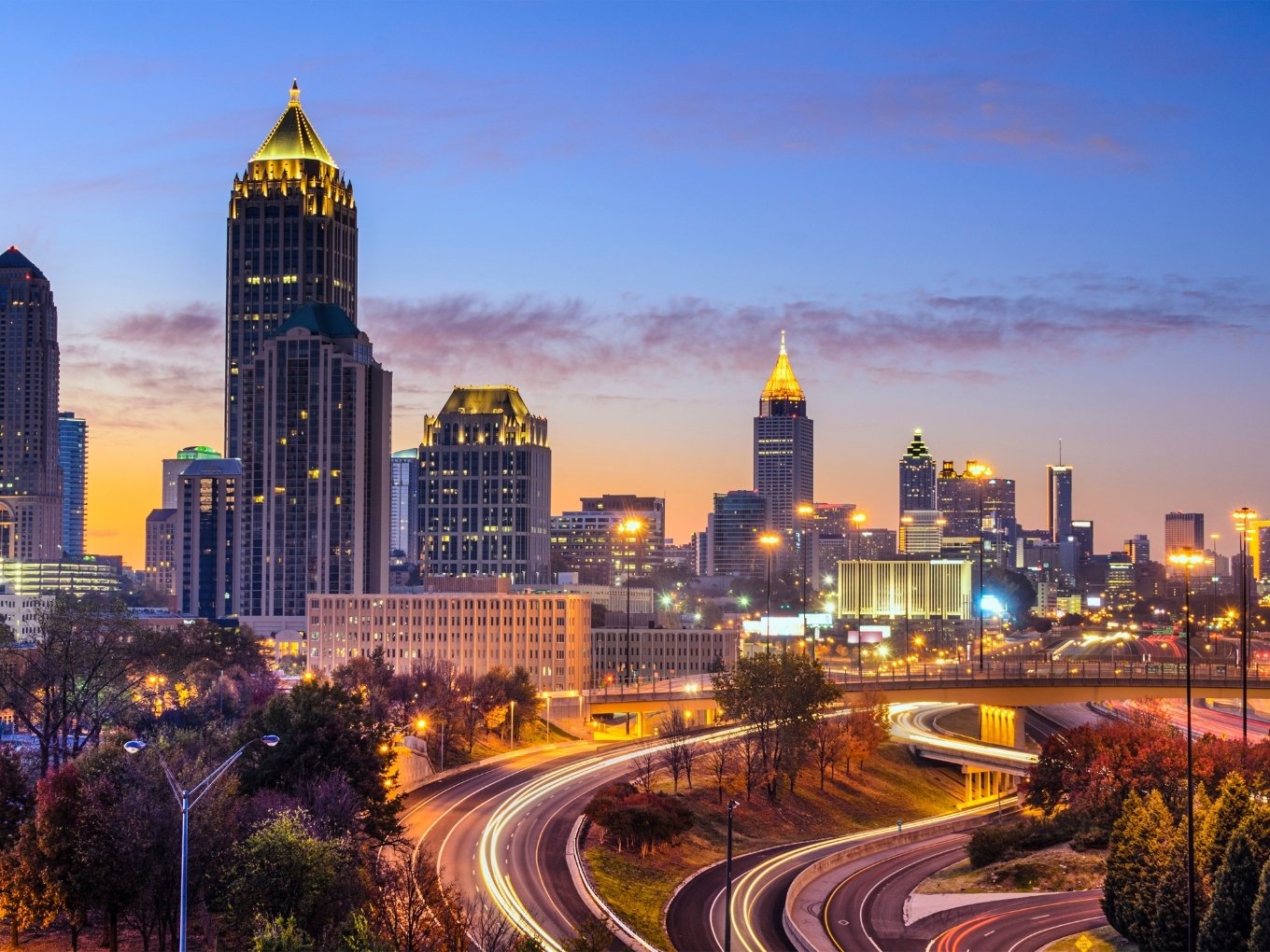 Directly flying into Atlanta international airport and staying close to downtown Atlanta is the best way to explore the city!

Time Required At Atlanta: With quite a few things to see and do in Atlanta, I recommend spending a minimum of two days to see the city’s major highlights. However, if you have more time, you could spend an entire week exploring several museums, the city’s shopping district, and eclectic neighborhoods.

Getting To Atlanta: The best and most comfortable way to get to Atlanta is by flying into Hartsfield-Jackson Atlanta International Airport, located very close to downtown Atlanta. Alternatively, you could also take an Amtrak train or a Greyhound bus to Atlanta.

Parking & Transportation In Atlanta: Most hotels and attractions in Atlanta have ample parking, and there are quite a few public parking lots in the downtown area. Though MARTA, Metropolitan Atlanta Rapid Transit Authority, offers bus and rail services in Atlanta, it’s a good idea to rent a car when visiting Atlanta.

Tours & Multi-Attraction Passes In Atlanta: If you’re visiting Atlanta or any other city in the US for the first time, I highly recommend using a hop-on-hop-off tour service and buying a discounted multi-attraction pass from CityPASS. There’re a couple of local tour companies that offer guided bus and trolley tours in Atlanta – The Peachtree Trolley and Atlanta Sightseeing Bus Tours.

Lodging & Dining In Atlanta: Atlanta is bustling with several hotels ranging from boutique hotels to bread and breakfasts located close to downtown offering easy access to several attractions. The dining options in Atlanta can be overwhelming, with several different cuisines and restaurants offering fine dining and casual dining. However, you must try a few famous southern delicacies, including BBQ, fried chicken, and chicken biscuit, when visiting Atlanta. I have reviewed the lodging and dining options in Atlanta in detail in the later section of this post.

Things To Do In Atlanta

Most of the downtown attractions in Atlanta are located around the Centennial Olympic Park, a lush green public park built for the 1996 Summer Olympic Games. The major Atlanta downtown attractions, including World of Coca-Cola, Georgia Aquarium, SkyView Atlanta, and CNN Studio Tours, are all located within walking distance from the Centennial Olympic Park. You can park your car at one of the public or private parking lots at one of the attractions and then walk to the other attractions.

Here’re the must-see places on a trip to Atlanta, starting with the major downtown attractions! 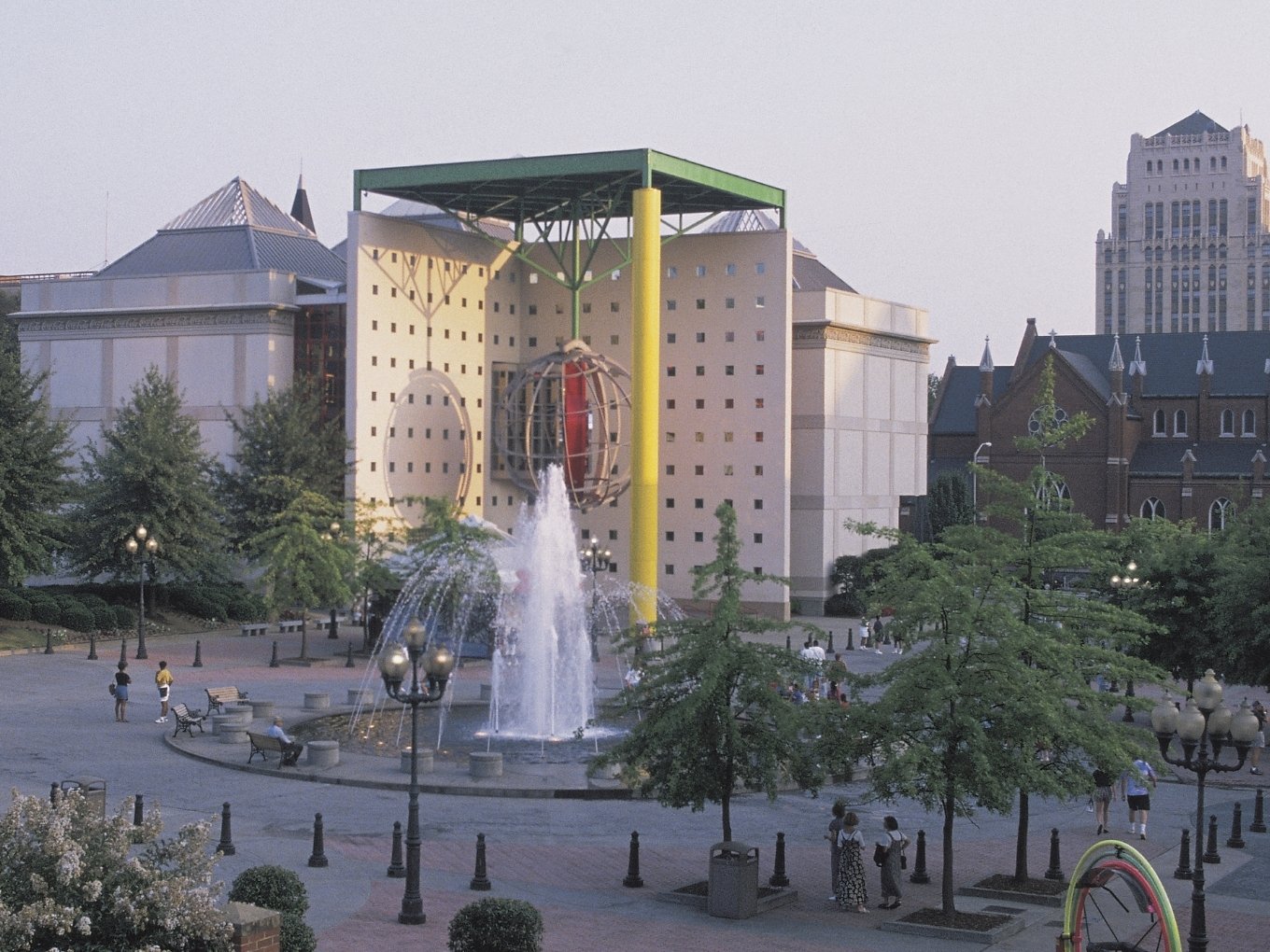 The World of Coca-Cola is a museum located in downtown Atlanta, featuring the history of the Coca-Cola Company, an art gallery, a working bottling plant, a security vault guarding the secret recipe of Coca-Cola, and a tasting room, where you can taste various Coca-Cola products from all around the globe.

Georgia Aquarium, one of the largest Aquariums in the US, features several aquatic animals, fresh & saltwater fishes, and is organized as a series of loops beginning and ending in the grand atrium. The aquarium also features various shows and other attractions, including dolphin presentations, sea lion presentations, a 4D theater, and fabulous dining at Café Aquaria. 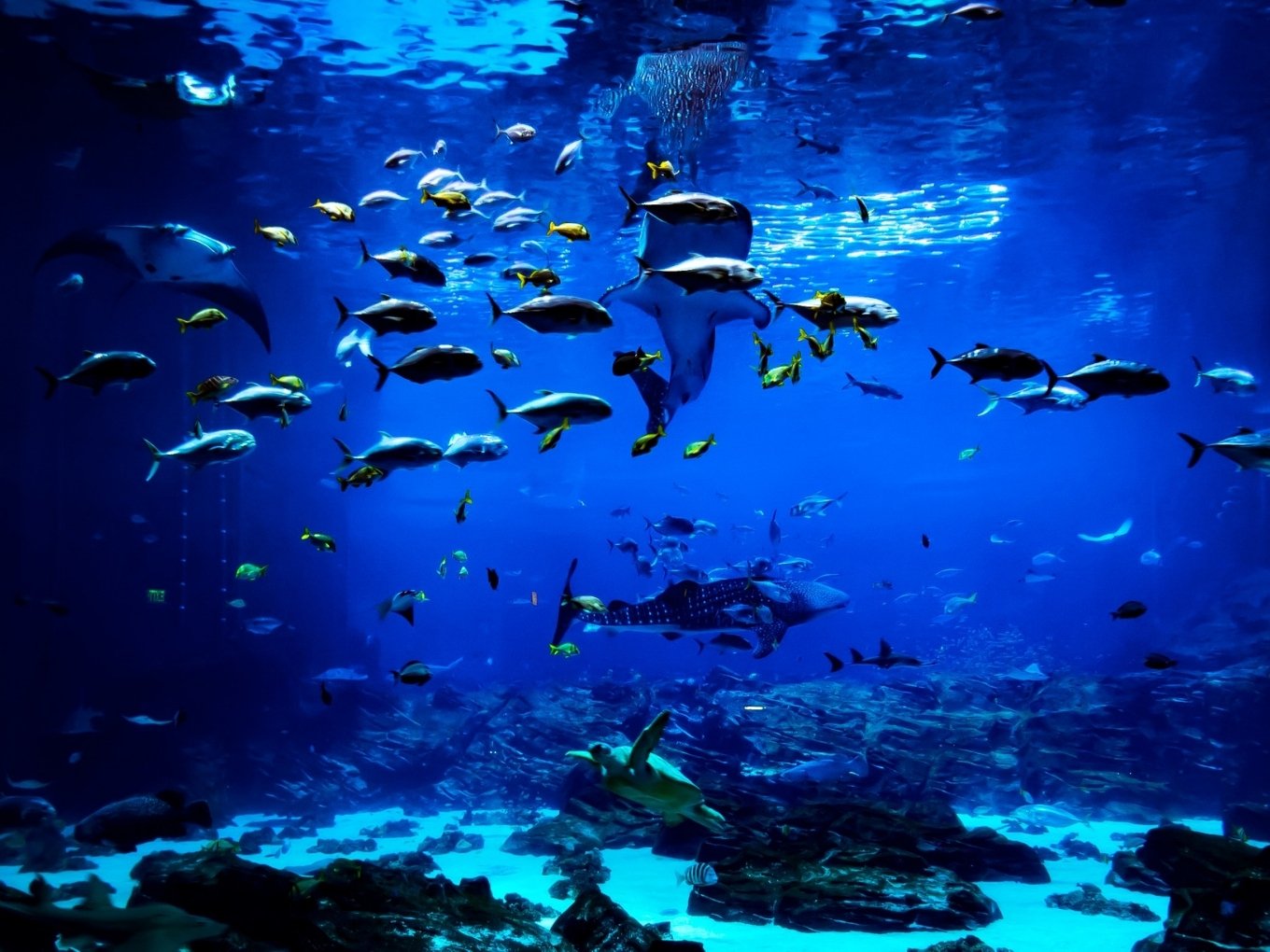 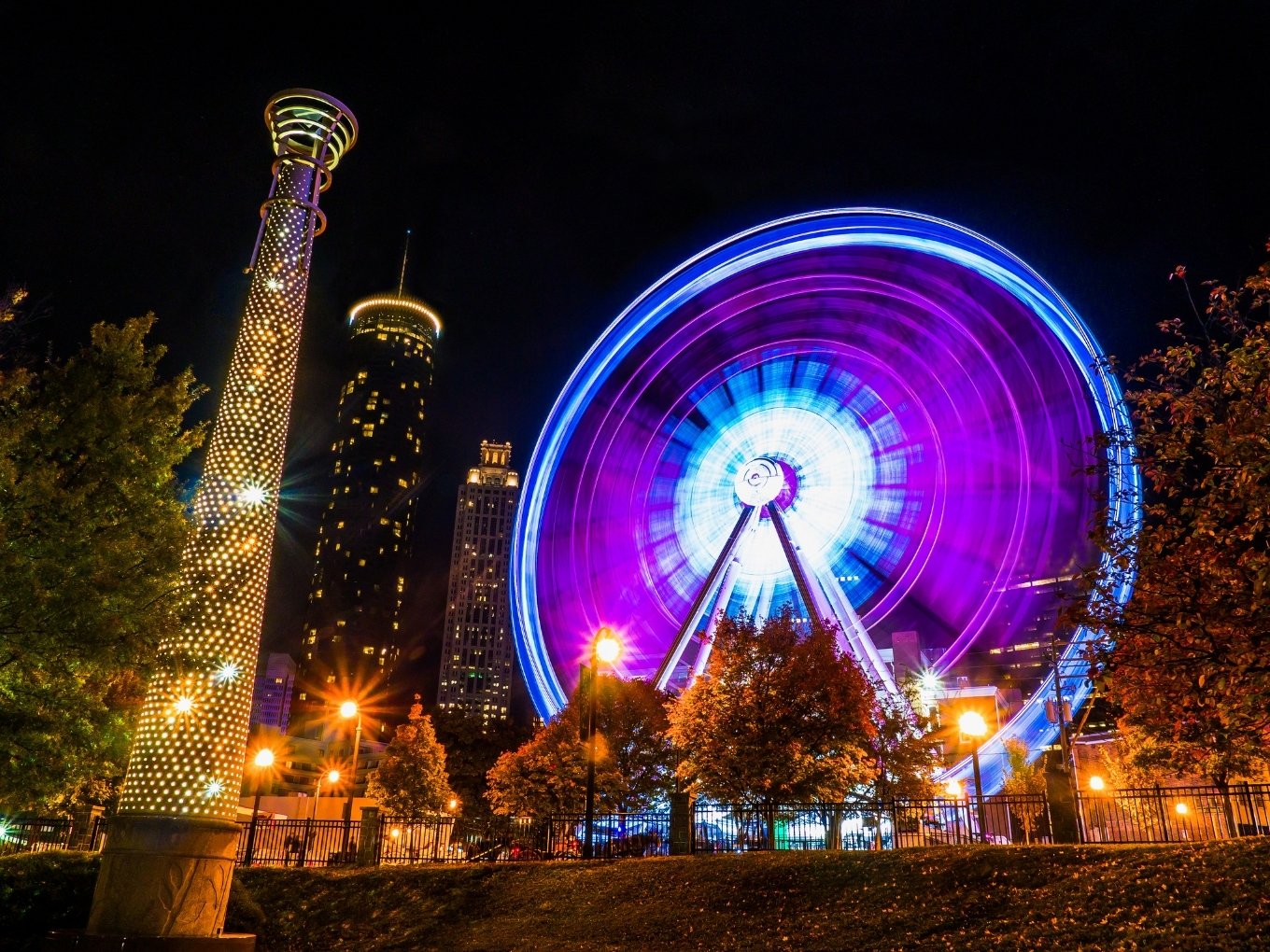 The SkyView Atlanta is a looming Ferris wheel in Centennial Olympic Park, in the heart of downtown Atlanta, featuring spectacular panoramic cityscapes at the comfort of temperature-controlled gondolas. The SkyView Atlanta is open year-round and offers VIP gondolas with glass floors and extended flight time. 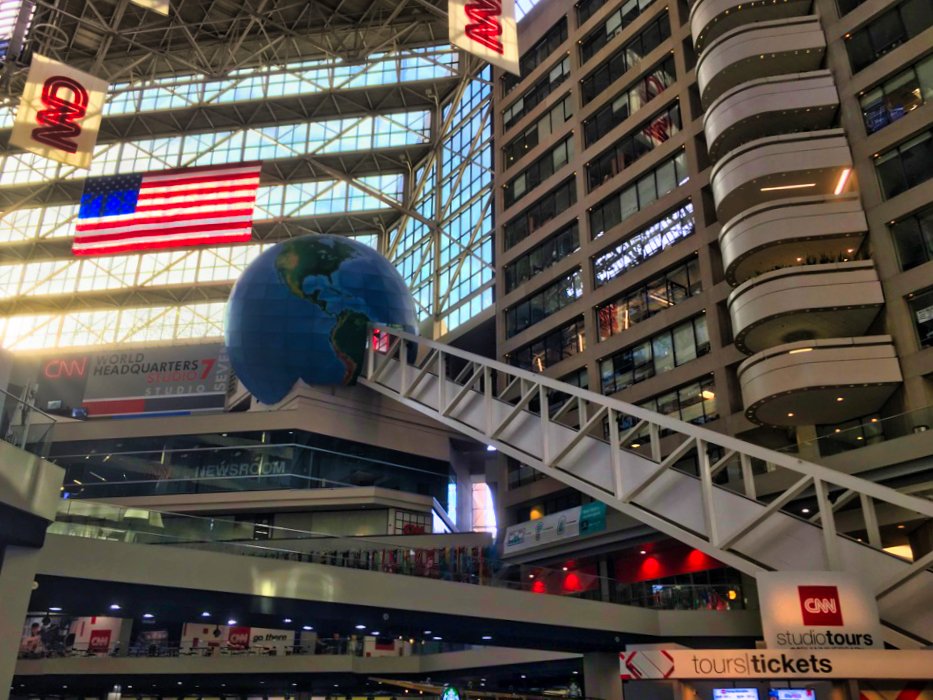 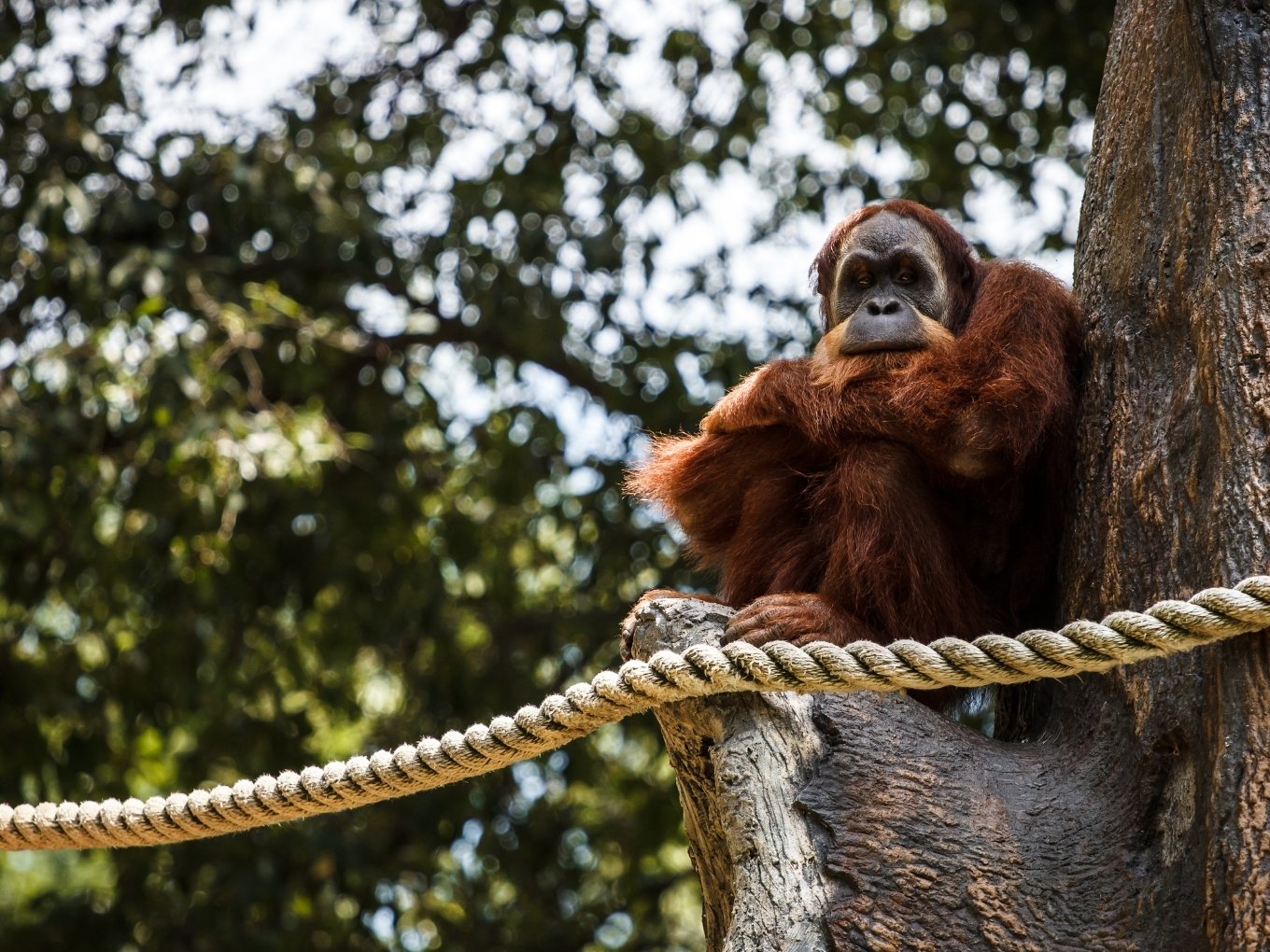 Zoo Atlanta, located a few miles south of downtown Atlanta, features several animals from all over the globe, many children’s activities, various animal feeding and encounters, wildlife presentations, and multiple dining options. The Zoo Atlanta is very popular among families with kids!

The Atlanta Botanical Garden, located about 3 miles south of downtown Atlanta, is one of the best botanical gardens in the US, featuring several indoor and outdoor gardens, including the popular Fuqua Orchid Center, Conservation Garden, and Desert House. The Atlanta Botanical Garden is open year-round and also features a vast collection of artwork and seasonal events. 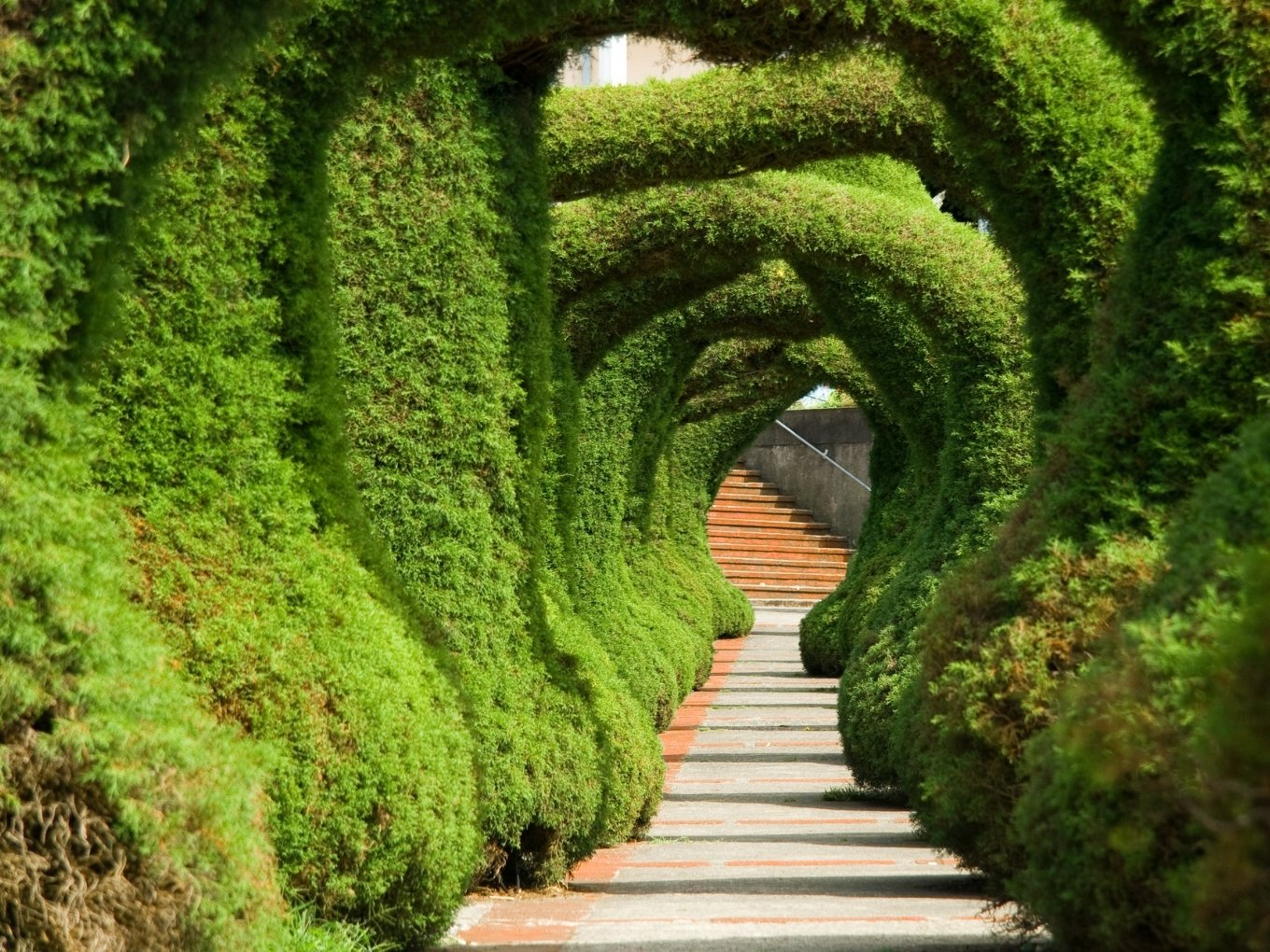 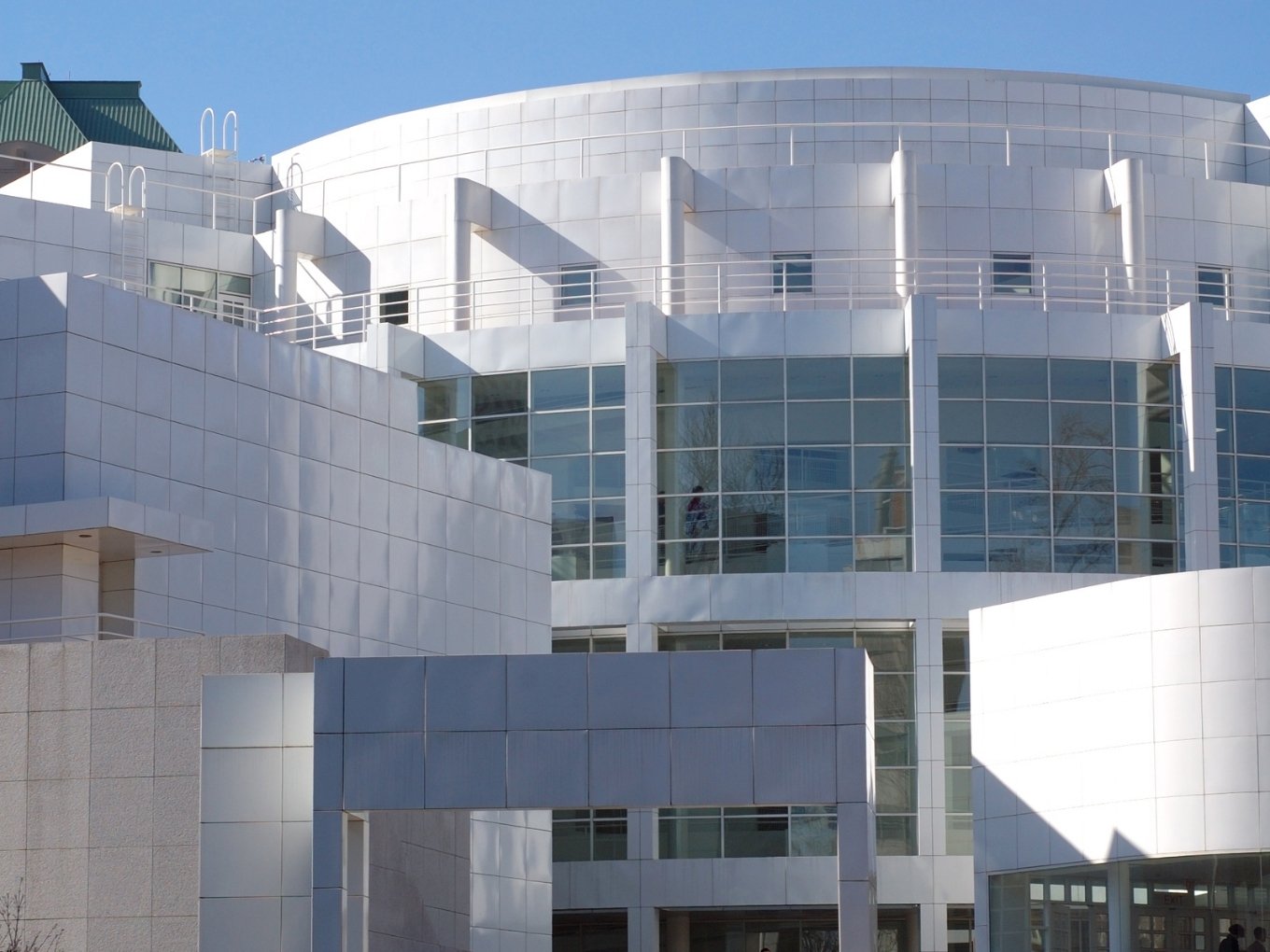 Located in midtown Atlanta, a few miles south of downtown, the High Museum of Art is globally acclaimed for its massive art collection, featuring ancient and modern & contemporary artwork from all around the globe. If you’re into museums, you could also visit Fernbank Museum, Center for Puppetry Arts, and Michael C. Carlos Museum in Atlanta. 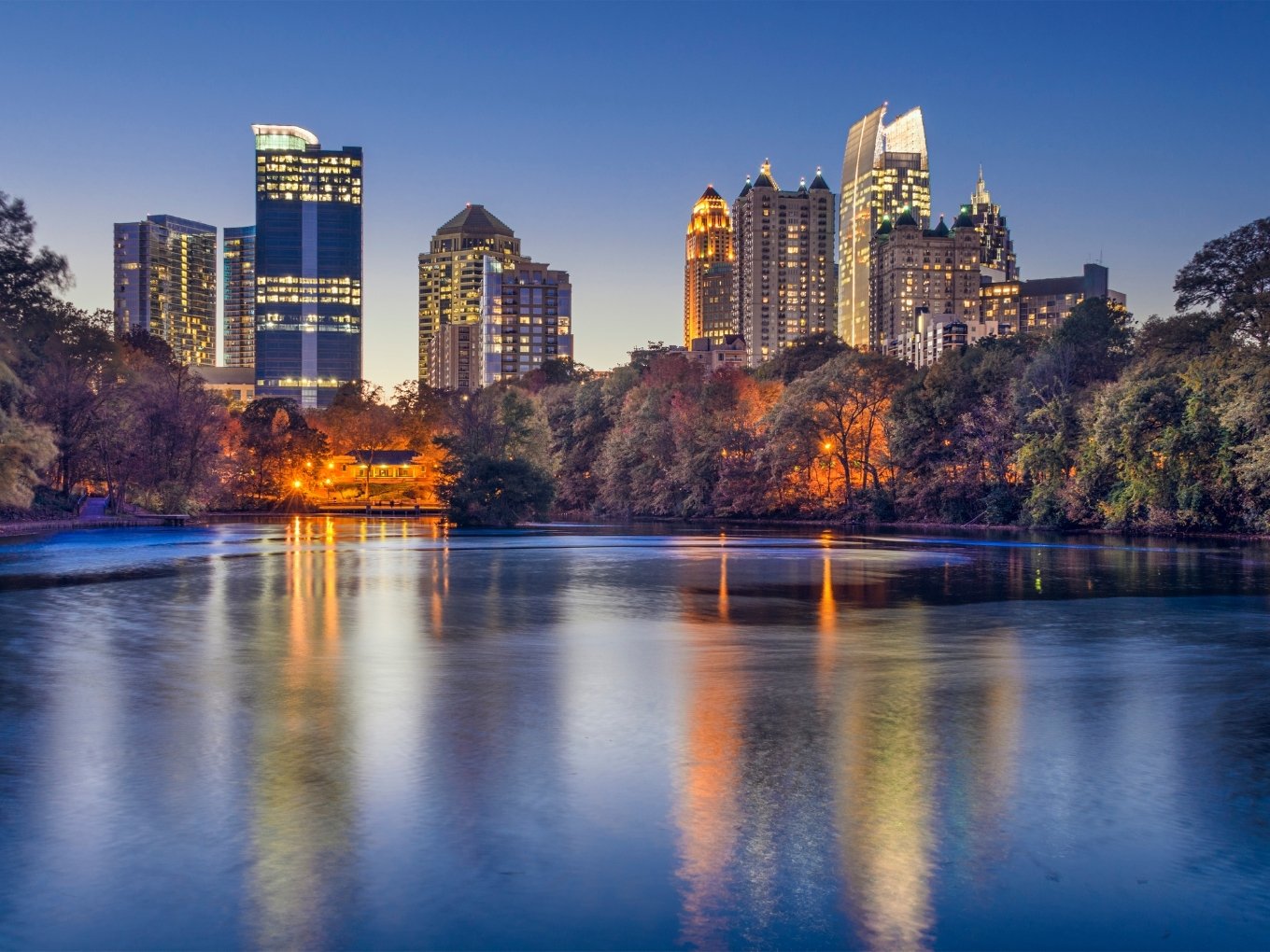 I recommend staying in Downtown Atlanta for easy access to several attractions and an authentic Atlanta experience!

Hotels In Atlanta: Most of the popular attractions in Atlanta are located close to the downtown area, and if you’re visiting for sightseeing, I highly recommend staying right in the heart of the city in Downtown Atlanta. There’re several lodging choices in downtown Atlanta, ranging from boutique hotels to bread and breakfasts. However, here’re my top picks for hotels near downtown Atlanta to help you choose the best lodging option for your trip to Atlanta.

Restaurants In Atlanta: There’re endless dining options in Atlanta, ranging from fine dining to local eateries serving various cuisines. There’re so many eateries in every street, especially in downtown Atlanta, it’s impossible to try them all or pick one over the other. However, here’re a few dishes and joints you must try when in Atlanta – Atlanta’s best BBQ at Fox Bros. Bar-B-Q, fried chicken at Harold’s Chicken & Ice Bar or Gus’s World Famous Fried Chicken, chicken biscuit in Atlanta Breakfast Club, and delicious milkshakes at The Yard Milkshake Bar near Centennial Park. 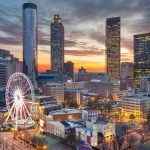 I hope you enjoyed reading the post, The Ultimate Guide To Atlanta Downtown, and I hope this will help you plan your trip to Atlanta Downtown. You can find other Georgia attractions in my Georgia Travel Guide.