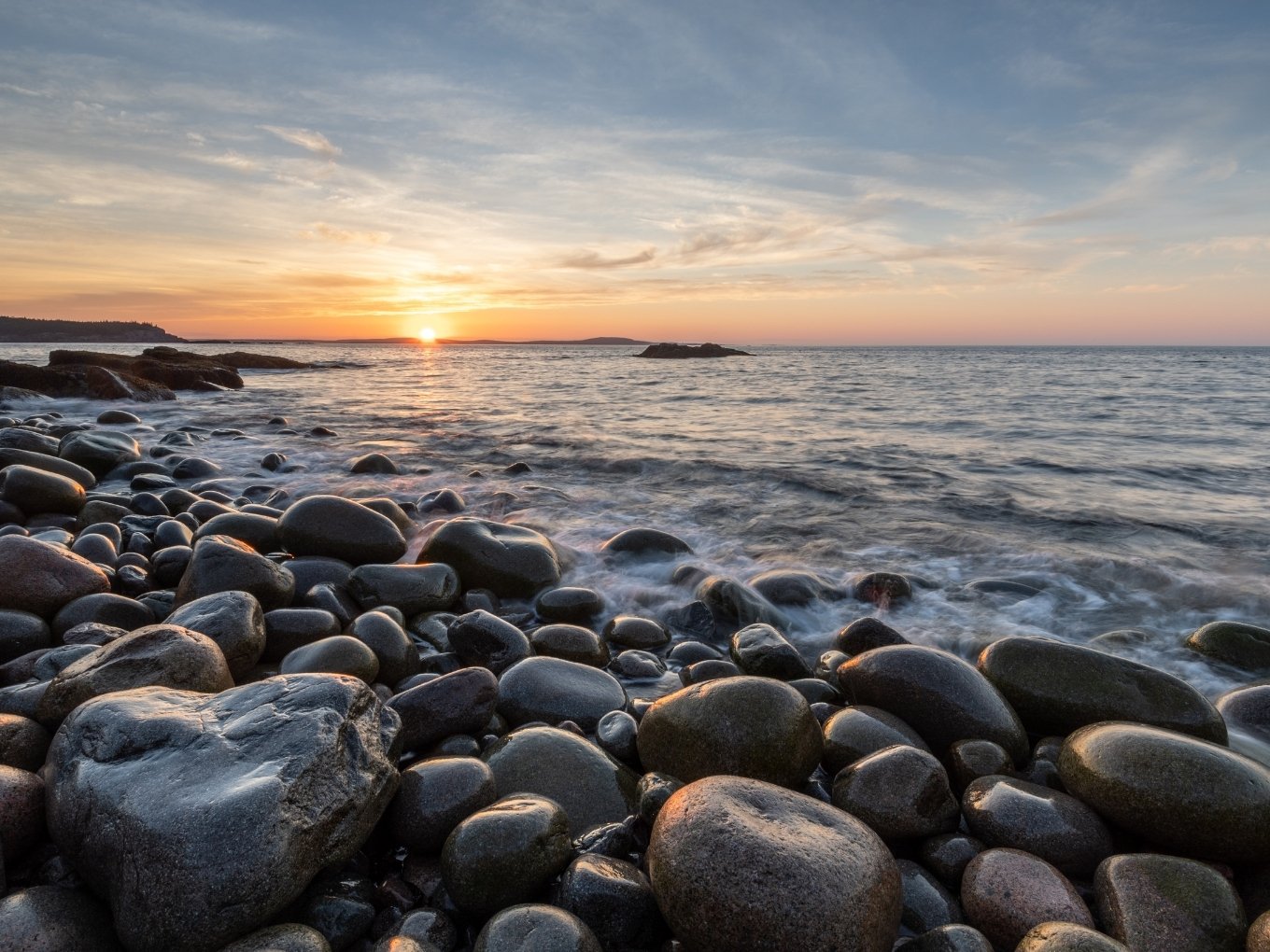 Acadia National Park, located on Maine’s coastline, is home to a diverse array of natural landscapes that can be explored via scenic drives, horse-drawn carriages, and boat tours!

Maine, located on the northeast corner of the US, is home to a beautiful coastline overlooking the Gulf of Maine and the Atlantic Ocean! Situated on the middle section of Maine’s coastline is the Acadia National Park comprising a significant part of Mount Desert Island, some part of the island town of Isle au Haut, a portion of the Schoodic Peninsula located east of Bar Harbor, and a few other smaller islands on the coast of Maine.

In order to experience all of Acadia National Park, you must tour the Park by land and by its waterways!

The sublime scenery that we see at Acadia National Park has been sculpted and shaped over several million years by several natural forces, including volcanic activities, movements in the earth’s crust, glacial activities, and erosion that still continues to shape the landscape at Acadia National Park. Today, it’s one of the most sorted after destinations in the US, drawing visitors from all over the globe to experience a spectacular slice of nature on the northeast corner of the US, which for the most part of the year sees the first sunrise in the US! 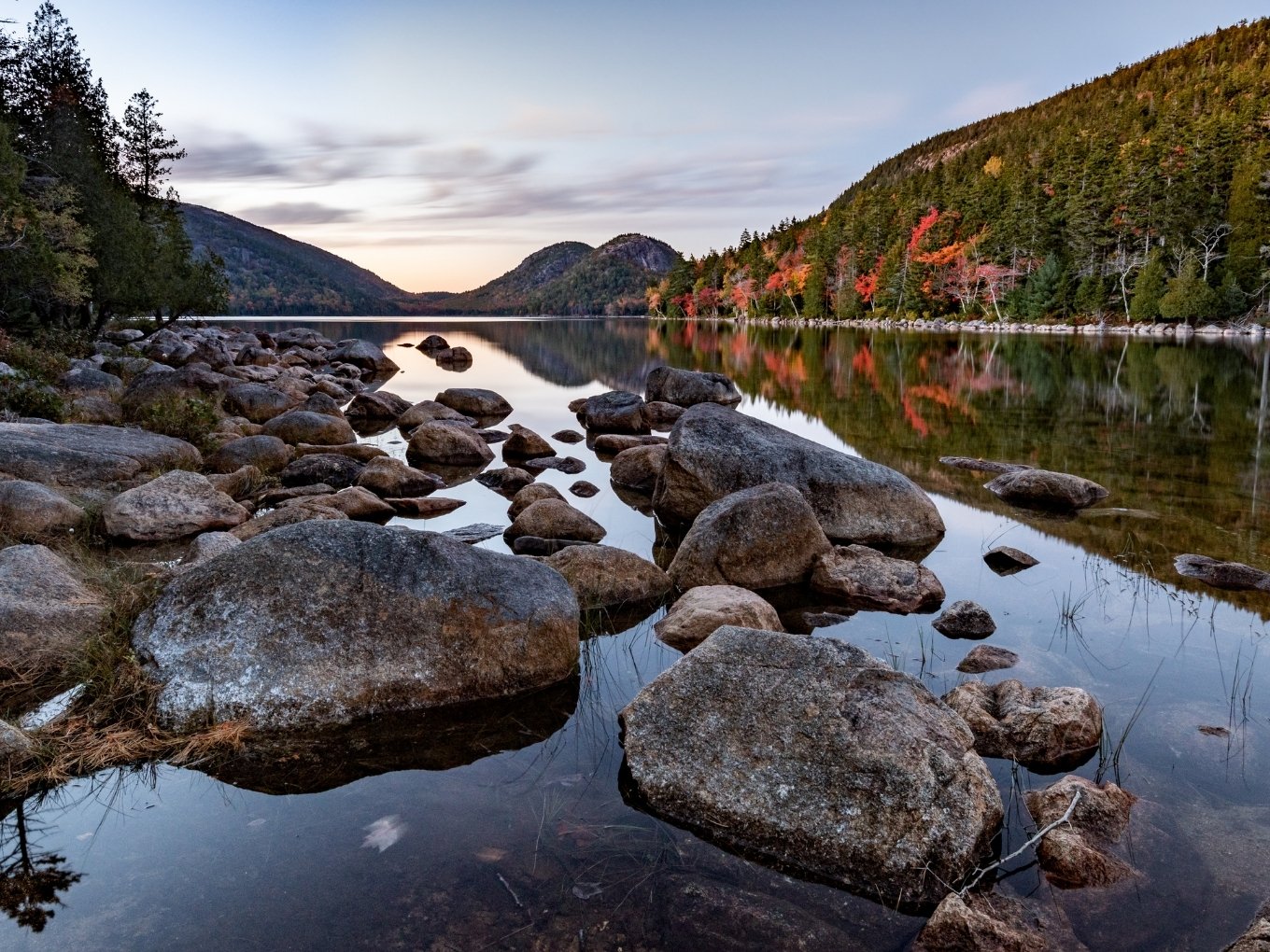 Acadia National Park is open year-round, but winters are mostly for snow sports, with the majority of the Park amenities closed during the winter months!

Acadia National Park Operating Hours & Seasons: The Park is open year-round, but most of the park facilities, including the visitor centers, campgrounds, tours, and park stores, are seasonal and are open only outside the winter months. Winter travel to Acadia can be tricky and requires careful planning, as there are winter road closures in the Park and only a few areas and attractions remain accessible during winter, including Carriage Roads, Schoodic Loop & Point Road, and Sand Beach.

Transportation & Parking Inside Acadia National Park: The Park has parking space at every vista point and trailheads. However, during the peak seasons, there’s a ton of traffic in the Park, and it might become challenging to find parking during the summer months. So a better option is to use the Island Explorer bus service to traverse the Park, which is offered seasonally only during the peak summer months. The Park offers horse-drawn carriage tours and boat tours, which are the only way to explore some of the sections of Acadia National Park. I have reviewed the various tour options in Acadia National Park in a later section of this post.

Time Required At Acadia National Park: Acadia National Park is not that huge, but with a ton of things to do and see and with several isolated sections, I recommend spending at least three days in the Park. Three days should give you sufficient time to leisurely explore all the vista points and enjoy the boat and carriage tours to some of the pristine sections of the Park. However, if you don’t have that kind of time and can spend just a day or two, you could still see a lot of the Park by driving through the scenic loop drive and stopping at the popular vista points.

Things To Do In Acadia National Park 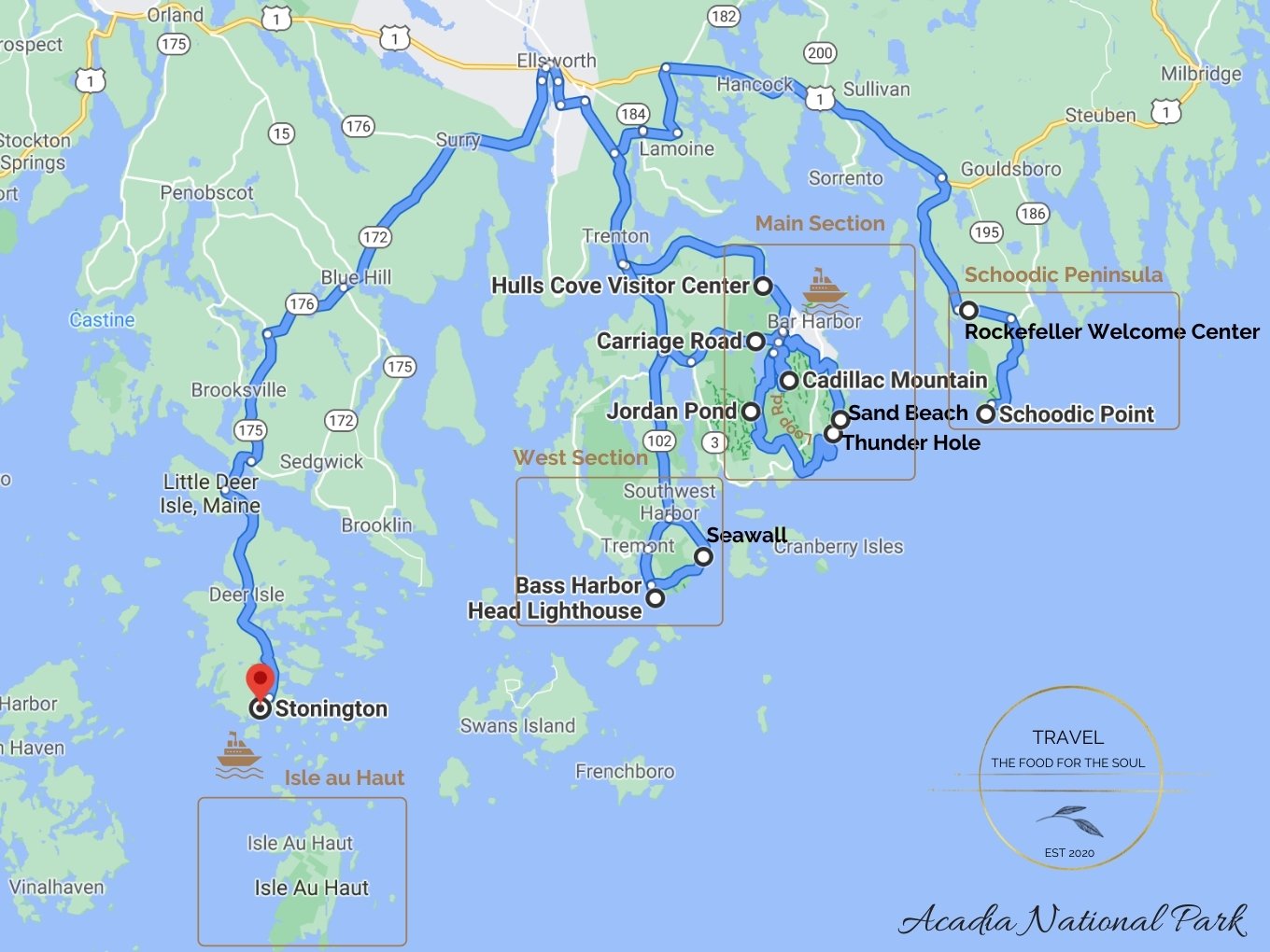 Main Section Entrances: Most people just stick to the Main section of Acadia National Park, the eastern part of Mount Desert Island, which is home to Bar Harbor, the Park’s Scenic Loop Drive, and several iconic vista points of Acadia National Park. The vista points on the main section of the Park are accessible via the Scenic Park Loop Road, which for most of the part is a one-way road and can be accessed via four entrances on Mount Desert Island.

Most people think Acadia National Park lies just within the boundaries of Mount Desert Island, which isn’t true. The Park is pretty widespread and has four major sections!

The Main Section: This is not an officially designated title; I am calling it the main section to logically divide the area and make it easy to follow and navigate. The main section of Acadia National Park lies on the eastern part of Mount Desert Island, and it’s home to most of the iconic landmarks and popular vista points of Acadia National Park, including the Scenic Loop Drive, Sand Beach, Jordan Point, Cadillac Mountain, and others. This is also where you will find Bar Harbor, the primary town close to the Park, offering several lodging and dining options to visitors of the Park.

The West Section: The west part of Mount Desert Island, comprising of the towns of Tremont and Southwest Harbor, is home to the legendary Bass Harbor Head Lighthouse and Seawall, which are some of the most photographed features of the Park.

Schoodic Peninsula: To the north of Mount Desert Island lies the secluded Schoodic Peninsula, a former US Navy base, featuring a few vista points along the most dramatic coastline of Acadia National Park.

The main section of Acadia National Park, the eastern part of Mount Desert Island, is home to several iconic landmarks and popular attractions in the Park. Here’re the major vista points in the Main Section of the Park that are best visited via driving along the Scenic Loop Drive! 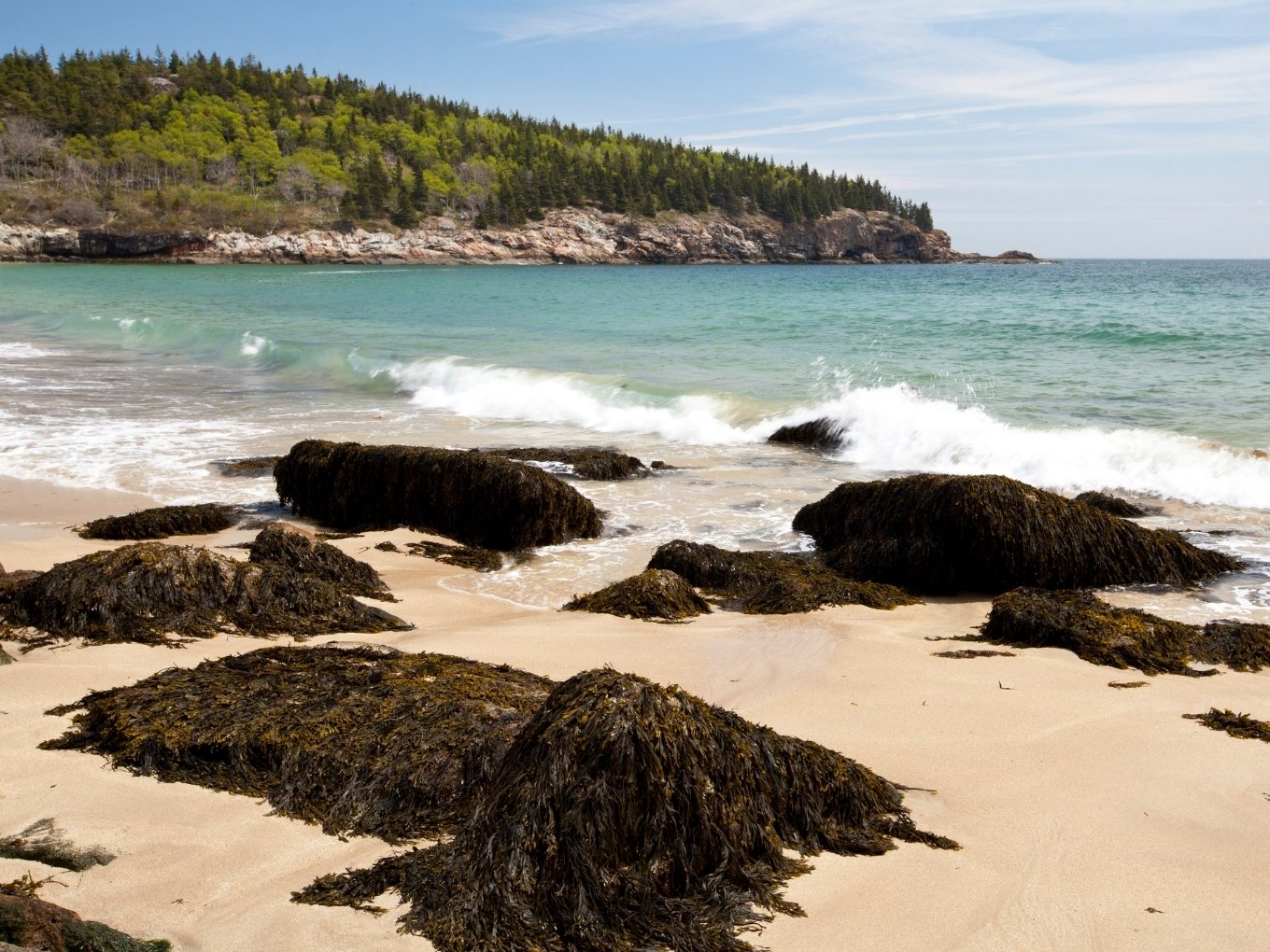 Sand Beach, the first major attraction on the Park Loop Road and the only sandy beach in Acadia National Park, is a small but gorgeous cove-style beach nestled between mountains famous for swimming, sunbathing, strolling, and starting point of two popular hikes in the Park – Great Head Trail and Beehive Trail, right across the Loop Road.

Thunder Hole, a natural narrow inlet carved into the granite cliffs, makes roaring sounds when waves crash against the rocks. There are granite stairs that lead to a well-guarded viewing platform, from where you could see the phenomenon up close. Thunder Hole is located just 1.7 miles south of Sand Beach and has onsite parking. 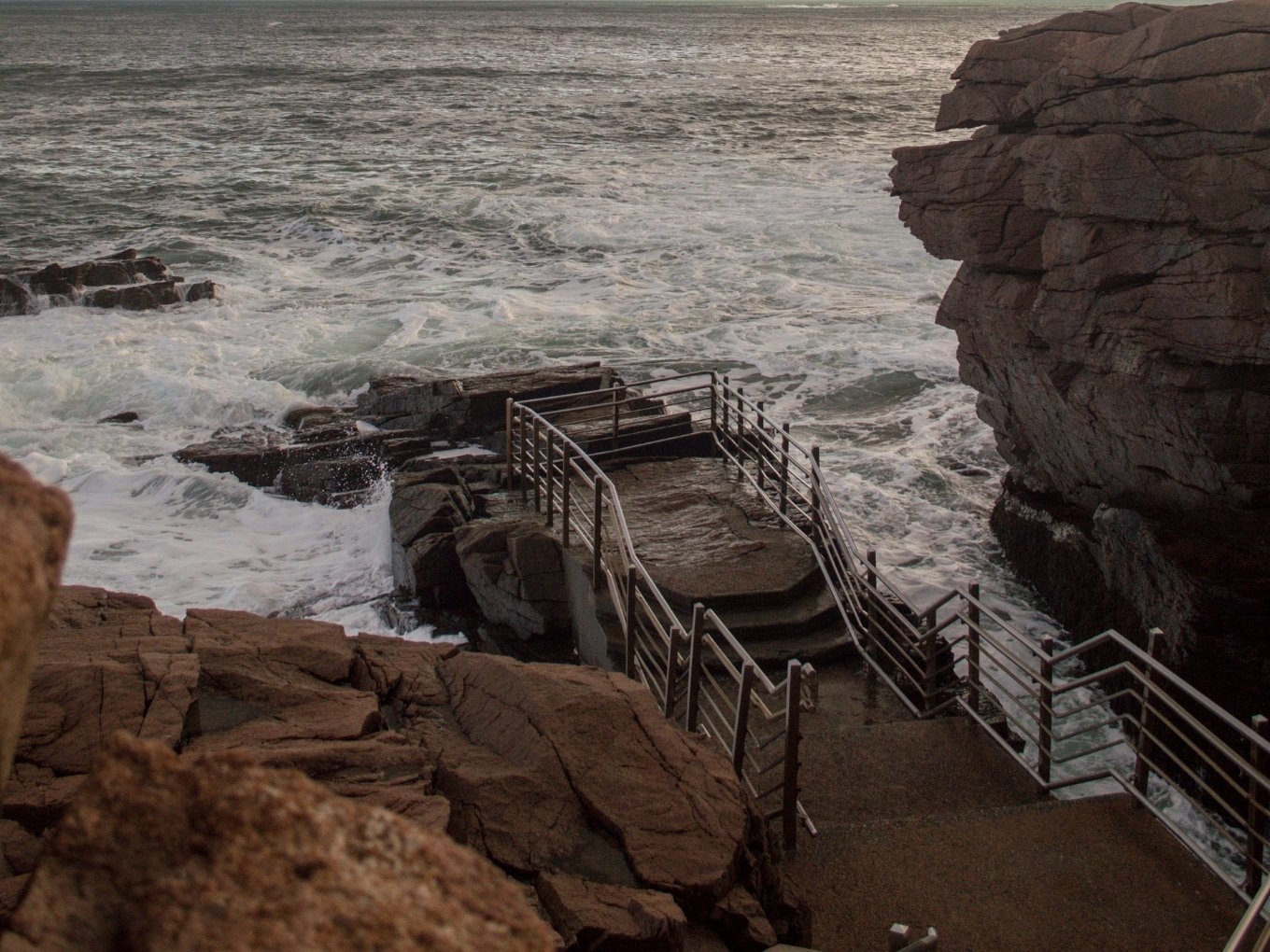 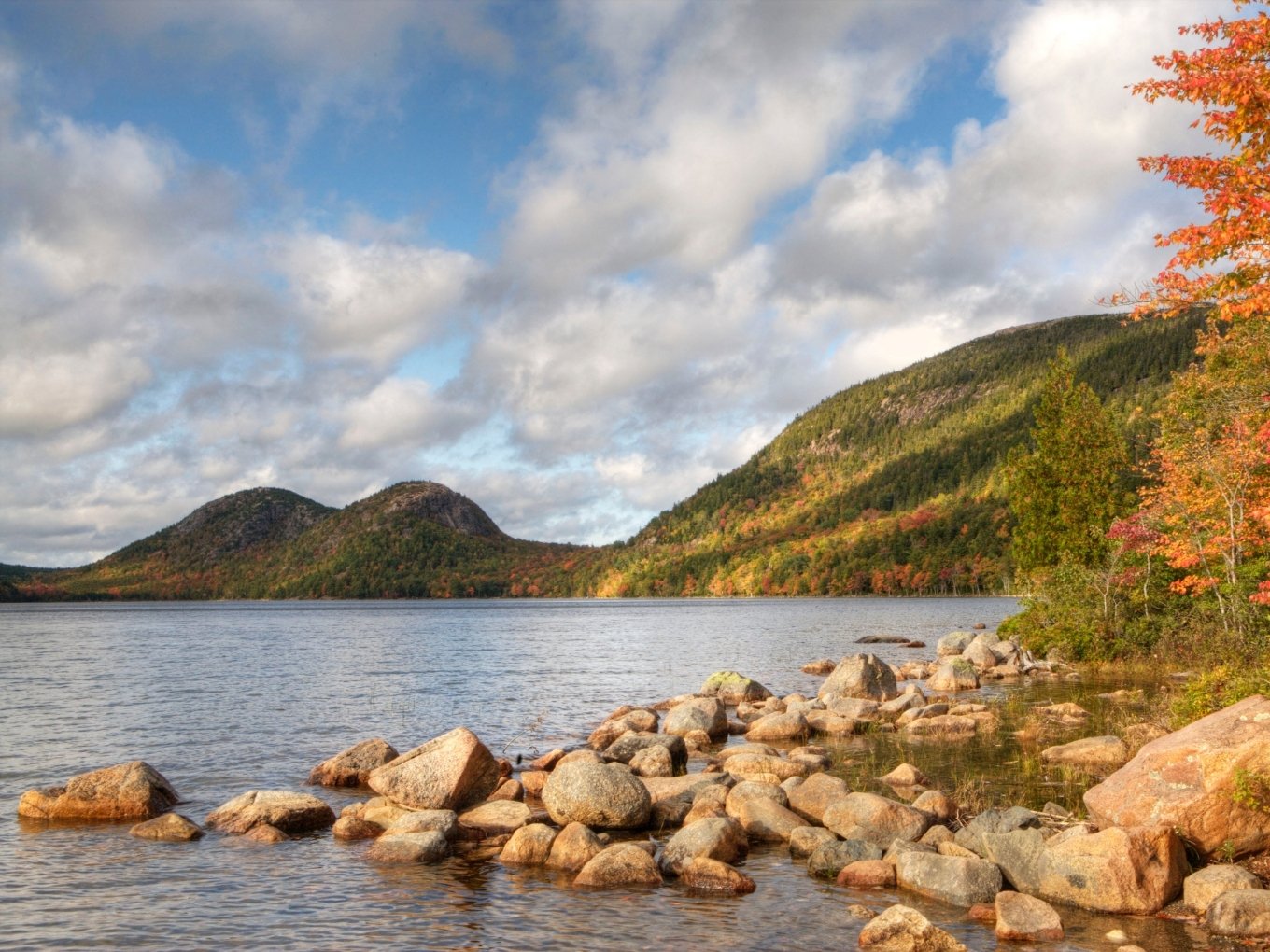 Jordan Pond is a gorgeous alpine pond carved by glaciers located about seven miles from Thunder Hole along the Park Loop Road. Jordan Pond is a popular spot for kayaking and non-motorized boating, but swimming is not allowed in the pond. Overlooking the spectacular pond is Jordan Pond House, a full-service restaurant and the only one in Acadia National Park.

Cadillac Mountain, at an elevation of 1,530 feet, is the highest point in Acadia National Park and offers breathtaking views of the coast! For most of the year, Cadillac Mountain is the first place in the US to see the sunrise and a popular spot to watch sunrise and sunset in the Park. 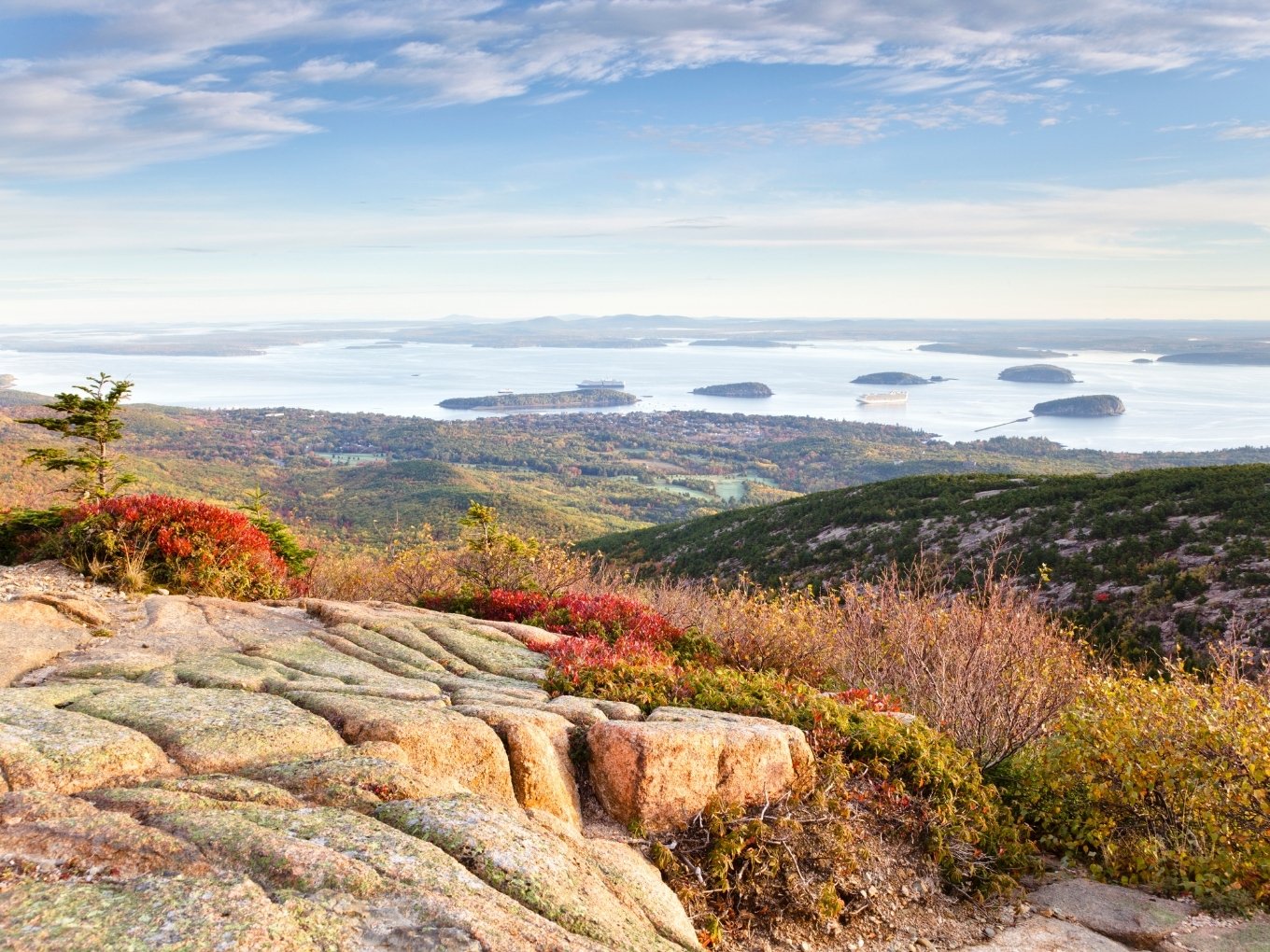 Encompassing the towns of Tremont and Southwest Harbor is the West Section of the Park that’s home to two popular vista points in Acadia National Park, the Bass Harbor Head Lighthouse and Seawall. 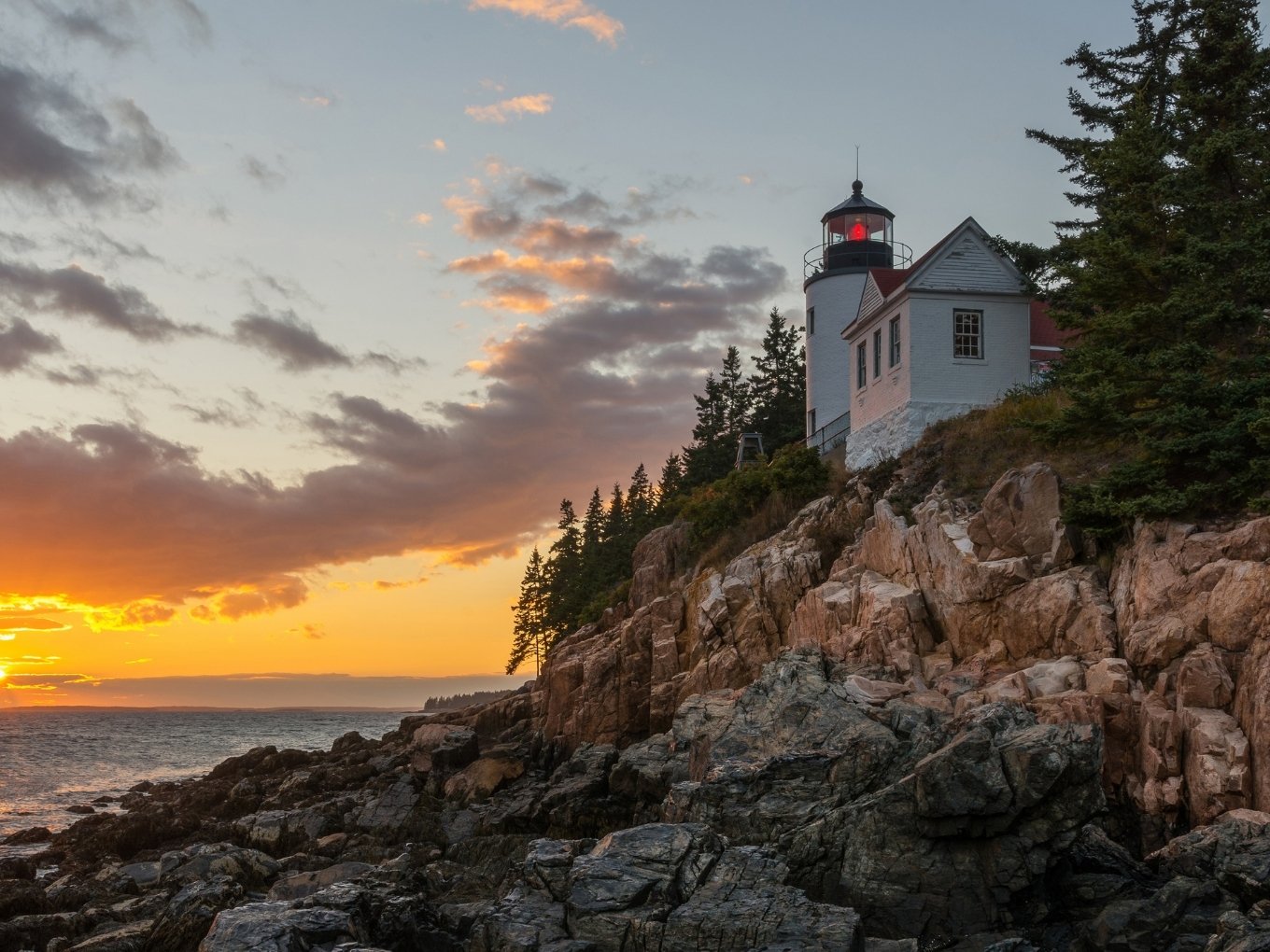 The Bass Harbor Head Lighthouse, located on the southwestern corner of Mount Desert Island, is one of the iconic landmarks of the Park. It’s located about 18 miles from Bar Harbor and can be viewed via a short trail. However, there’s limited parking, and it is often packed in the evening as it’s a popular spot to see the sunset in the Park.

The seawall is a spectacular coastal section on the southwest section of Mount Desert Island, lined with a natural wall and boulders formed by the crashing waves. The seawall is located about 2.5 miles east of Bass Harbor Head Lighthouse and is a must-see on the west side of Acadia National Park. 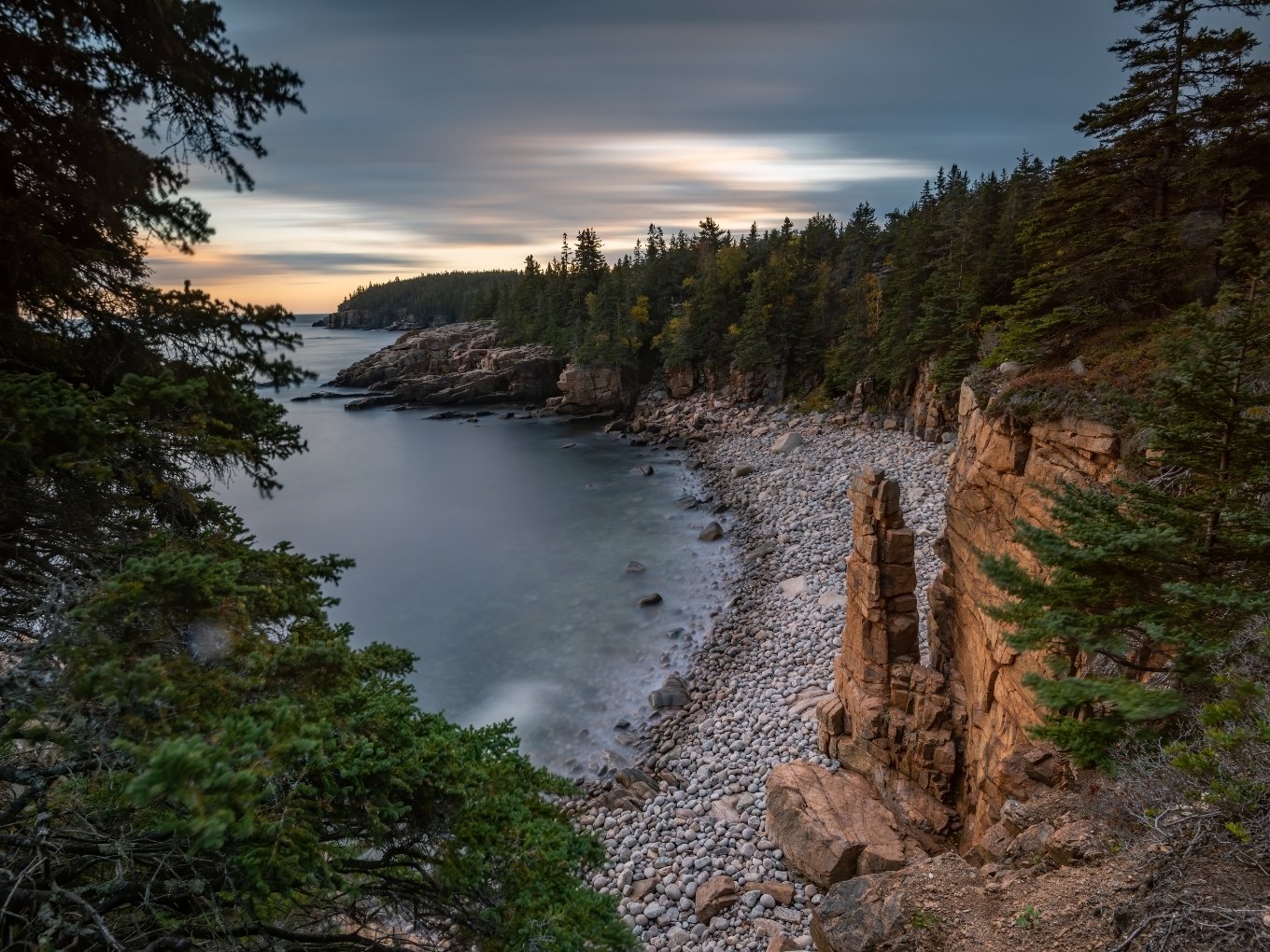 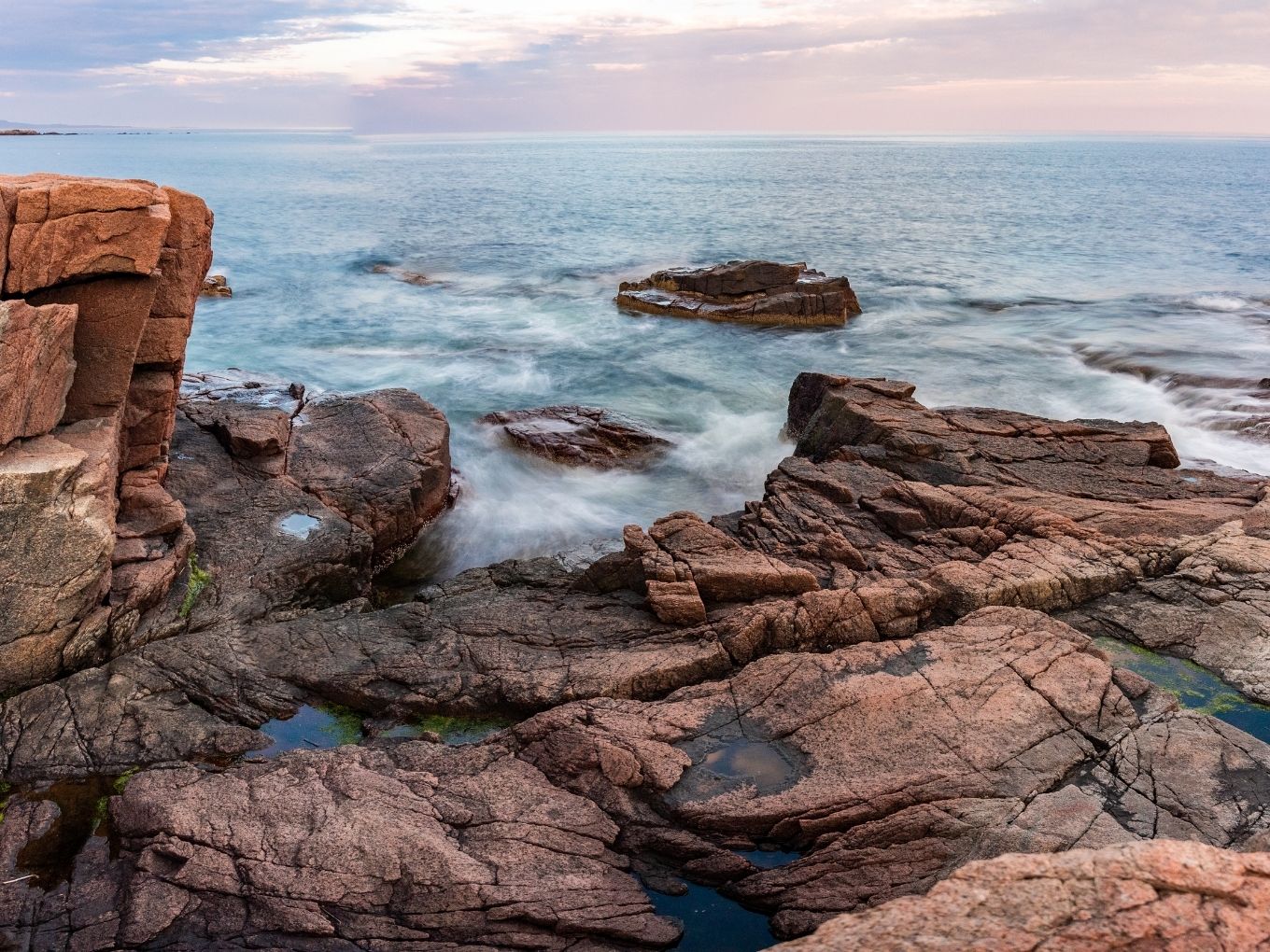 There’re a few pullovers along the Schoodic Loop Road in Schoodic Peninsula, but the Schoodic Point is the most famous vista point in winter harbor, offering spectacular coastal views! You could also hike a couple of hiking trails in the area, including Sundew Trail and Schoodic Head Trail. 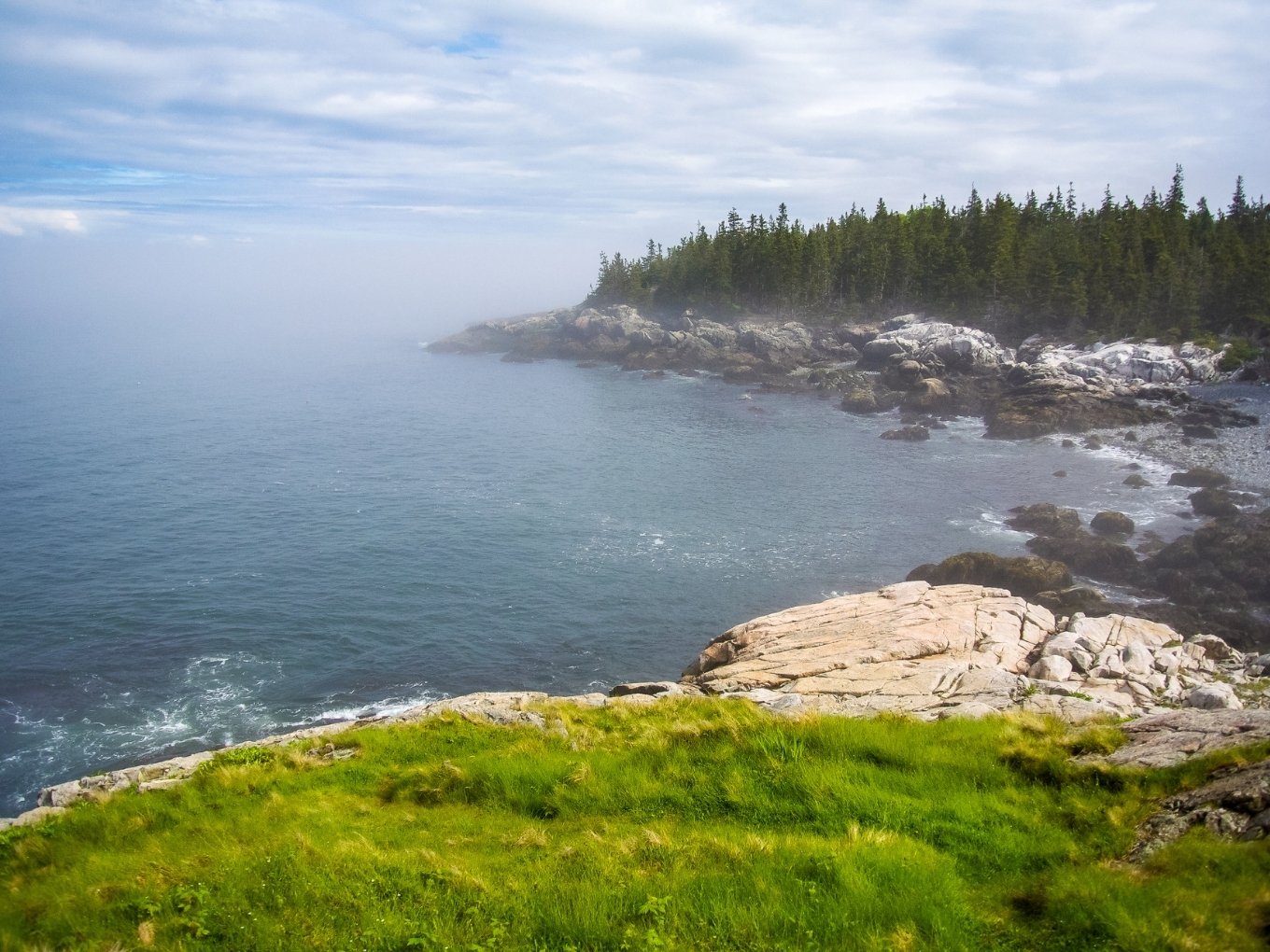 Isle au Haut, the most pristine and remote section of Acadia National Park, can be reached via a 45 minutes boat ride departing from the town of Stonington. Isle au Haut offers several hiking and biking trails with dramatic coastal views, a picturesque lighthouse, Boom Beach and Long Pond. 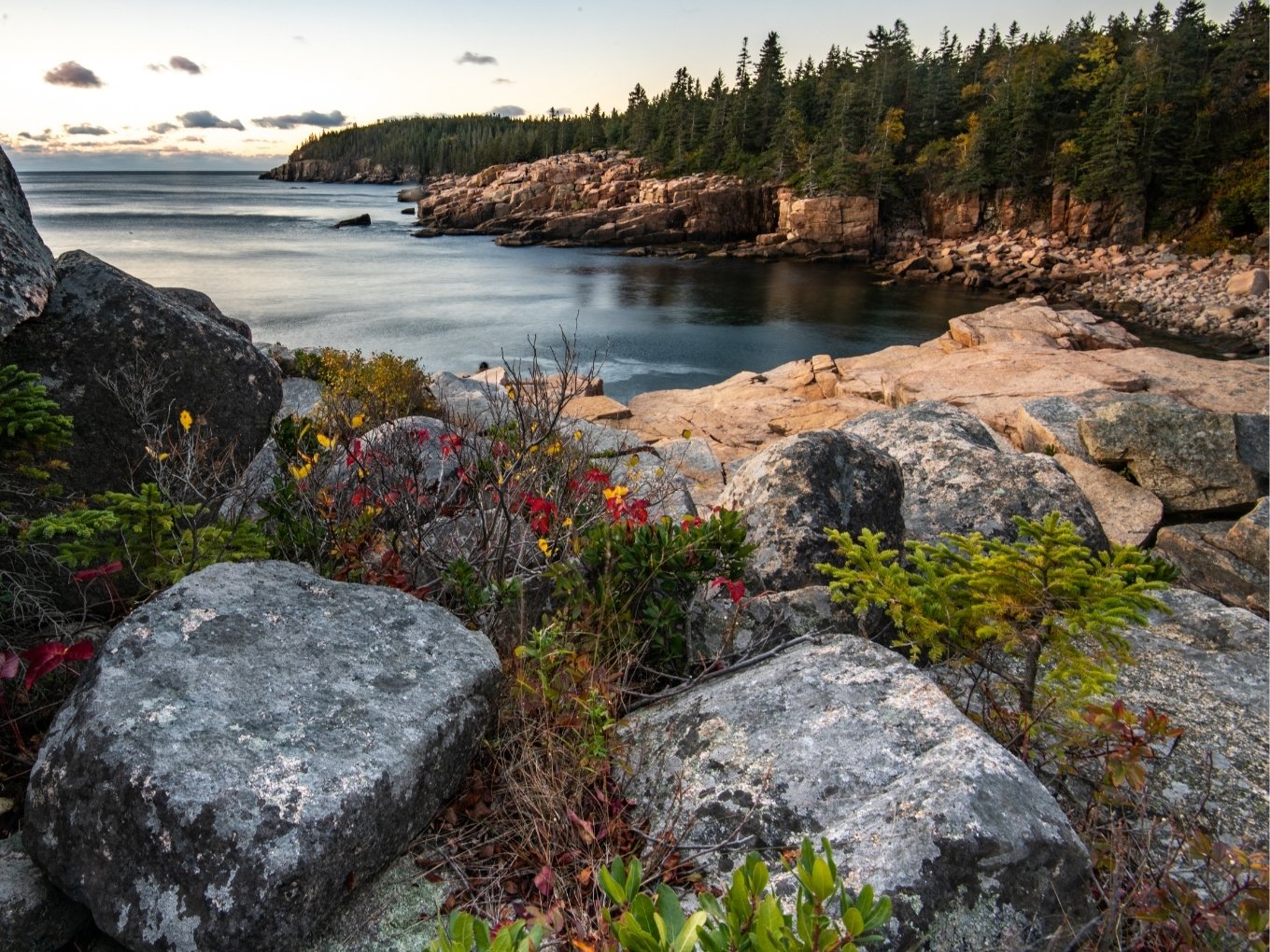 Ocean Path Trail: This is the most iconic hikes of Acadia National Park! The Ocean Path trail is a leisurely stroll along the gorgeous and rugged coastline of Maine. There’re two variations of this trail, a short 2 miles hike from Sand Beach to Thunder Hole and a more extended version from Sand Beach to Otter Point.

Jordan Pond Loop: This is a family and kid-friendly easy hike around the Jordan Pond, featuring gorgeous lake and mountain vistas.

Beehive Trail: One of the popular hikes in Acadia National Park, the Beehive Loop is a summit hike featuring gorgeous coastal views. However, the walk is pretty challenging and requires climbing using metal rods and rungs. I won’t recommend the Beehive Trail or the Precipice Trail to people with a fear of heights and families with kids.

Precipice Trail: The most challenging of all hikes in Acadia National Park, the Precipice Trail leads to the summit of Champlain Mountain and offers spectacular coastal views. However, the hike involves steep climbs using iron rods, and I would recommend this hike only to seasoned hikers.

Sundew Trail: The most popular hike in Schoodic Peninsula, the Sundew Trail is an easy hike along a rugged coastline featuring the most dramatic coastline in Acadia National Park.

Isle au Haut is not a place for casual hikers and requires proper planning and involves a lot of walking as most of the hiking trails are pretty long and strenuous.

Ferry Service To Isle au Haut: If you plan to visit Isle au Haut section of Acadia National Park, you need to use a ferry from Stonington. The Isle au Haut Boat Services is the only company that offers daily passenger service between Stonington and the Isle au Haut Town Landing. 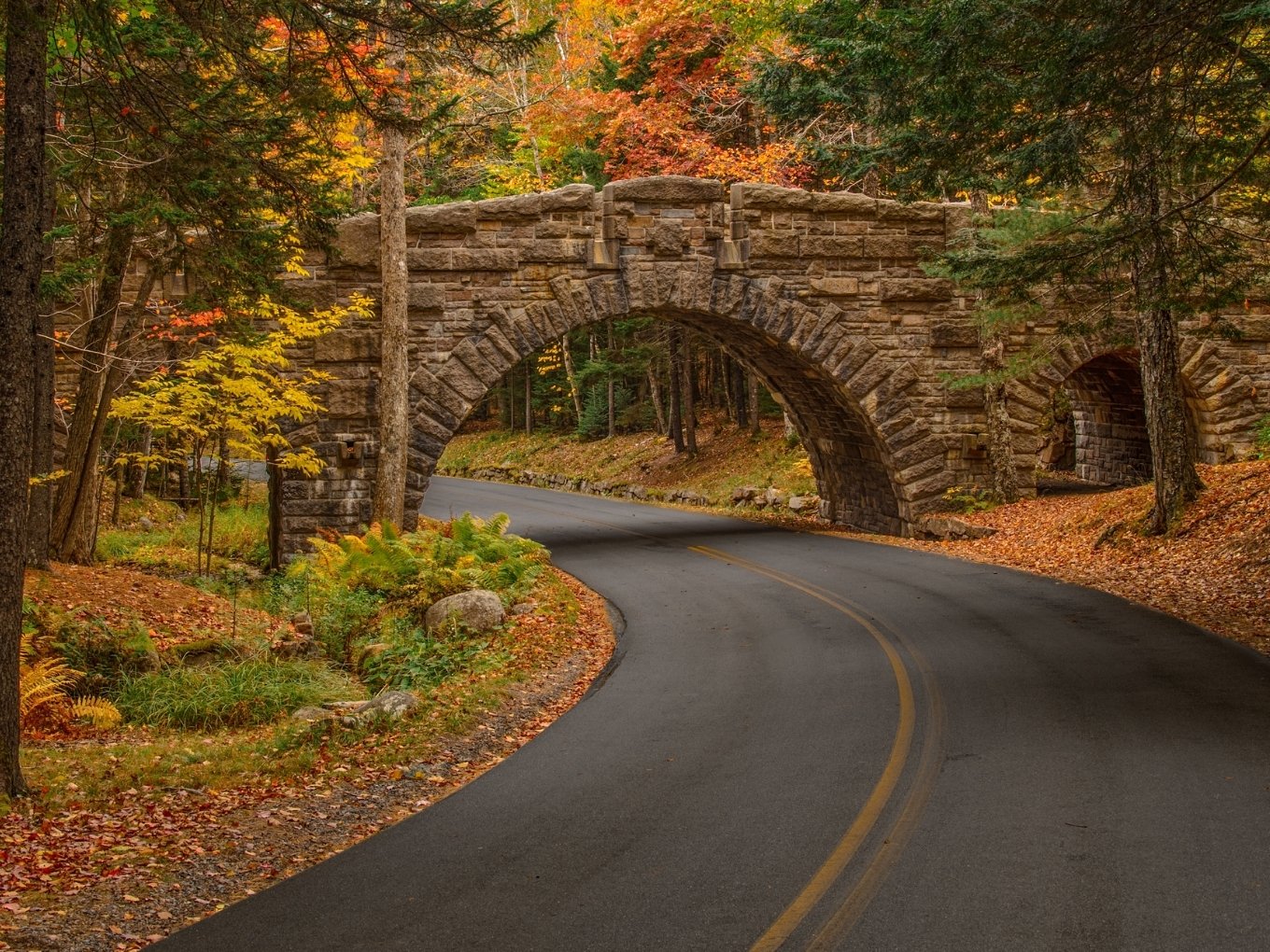 I recommend spending at least three days in Acadia National Park, but if you are pressed for time and just have a day, your best option is driving the Park’s Scenic Loop Road and a sightseeing boat tour.

The best lodging and dining options near Acadia National Park can be found in the town of Bar Harbor!

Hotels Near Acadia National Park: Look nowhere else than Bar Harbor if you’re planning to stay in a hotel! Bar Harbor offers a few great hotels, restaurants, and, most importantly, easy access to the Park. Here’re my top picks for hotels near Acadia Nation Park

Restaurants In Acadia National Park: The dining option inside the Park is limited to its only restaurant, the Jordan Pond House. However, you will find a few great restaurants in the town of Bar Harbor. Here’re my top picks for restaurants near Acadia National Park – Stewman’s Lobster Pound for excellent seafood, Side Street Cafe for American cuisine, Havana for Latin American fare, and Mount Dessert Bakery for some delicious pastries.