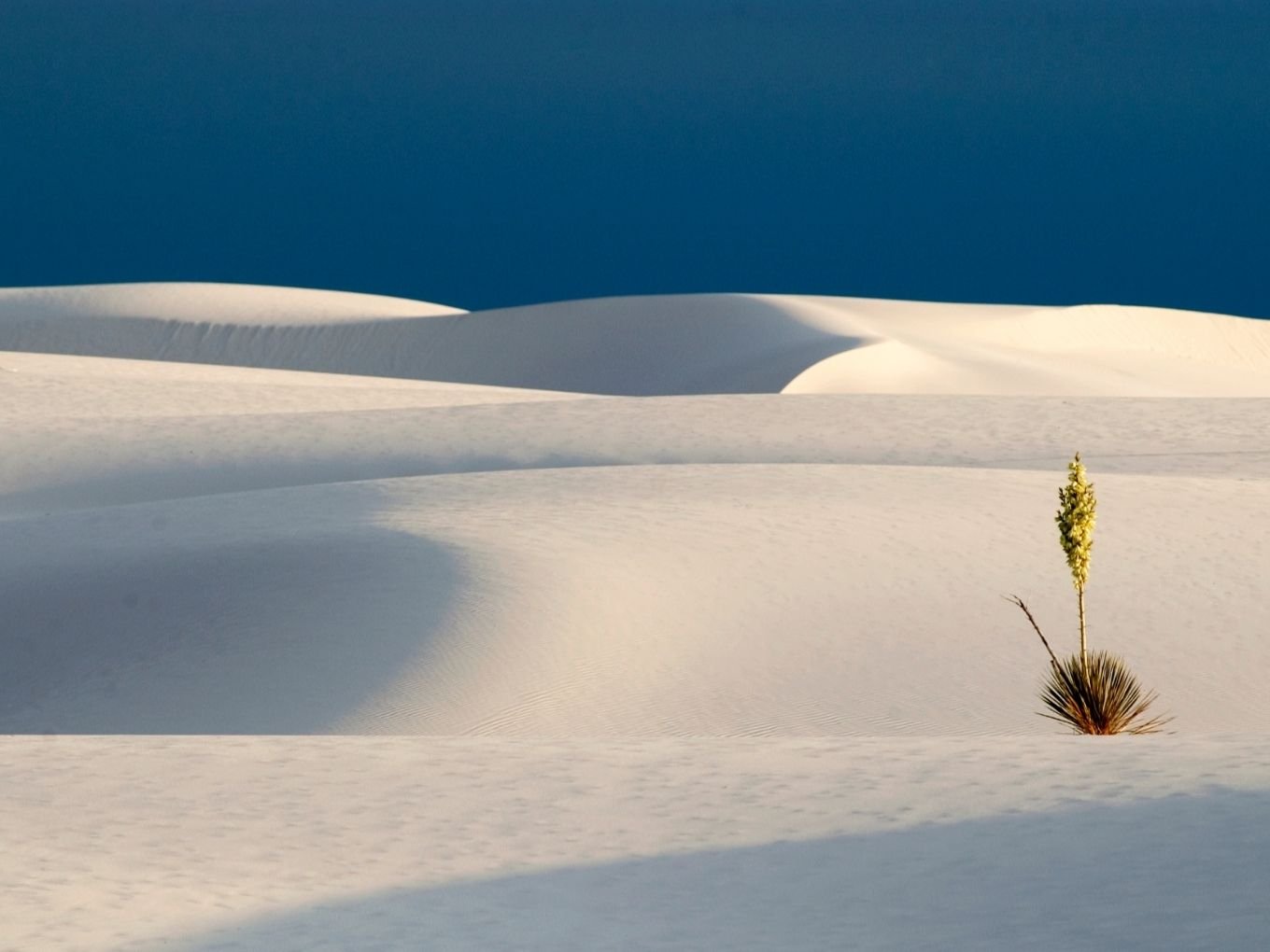 New Mexico truly lives up to its nickname, The Land of Enchantment!

New Mexico is a sprawling state in the US and home to several National Monuments, National Parks, historical sites, breathtaking desert landscapes, otherworldly rock formations, natural springs, caves, and so much more.

The endless sightseeing opportunities and the massive size of New Mexico are the two major challenges while planning a trip to New Mexico. The major attractions are remotely located and spread throughout the state, and getting from one attraction to the other involves a fair amount of driving or flying within New Mexico.

New Mexico is vast, and the major attractions are scattered all over the state!

To help you plan your perfect trip to New Mexico, I have compiled a sample five day New Mexico road trip itinerary. I have covered all the major attractions in New Mexico and have accounted for overnight stays and travel time while compiling the itinerary.

Here is my ultimate 5-day New Mexico road trip itinerary, featuring all major New Mexico attractions, an attractions map, detailed guides for every attraction, including recommendations on hotels and restaurants. 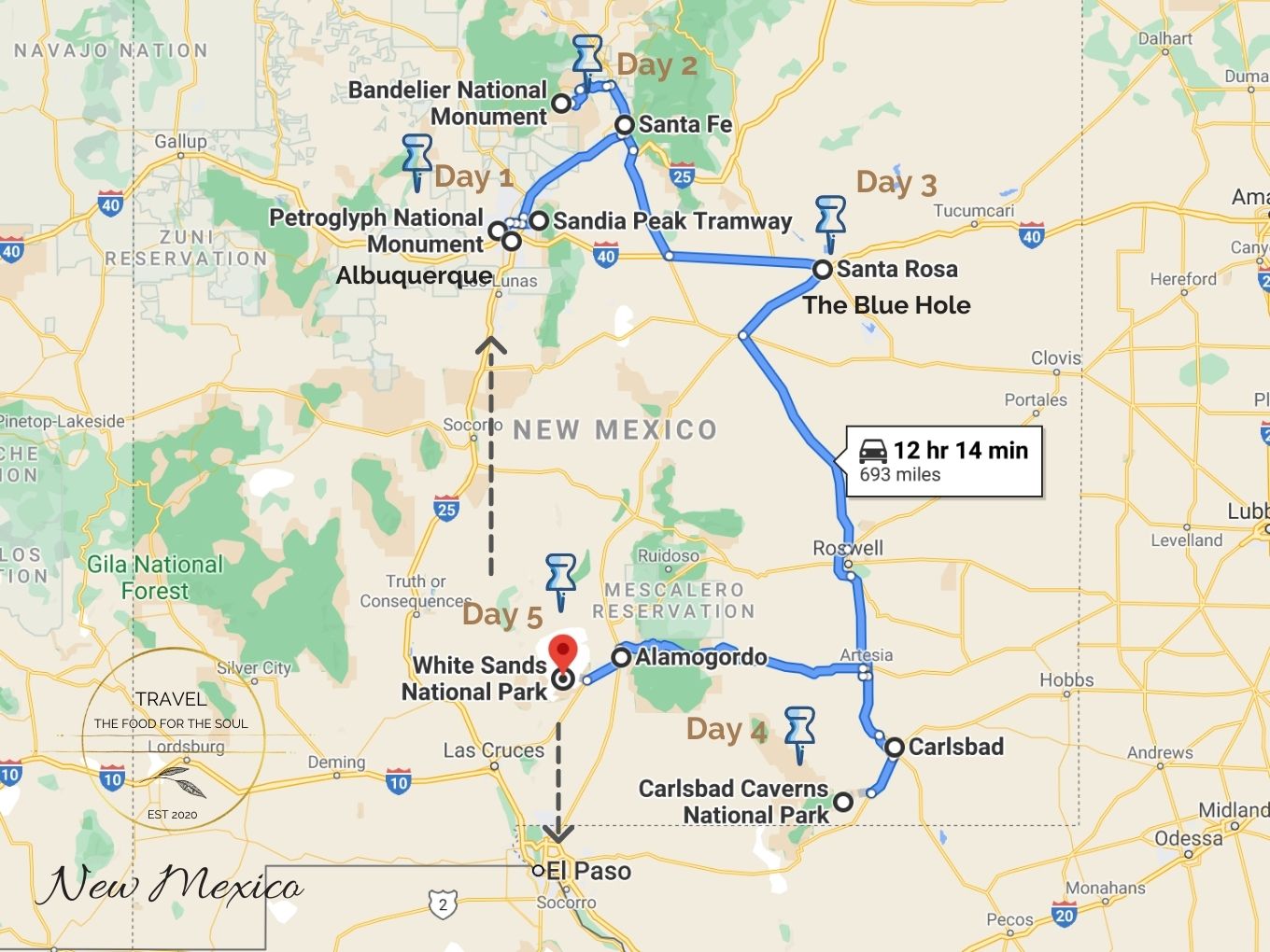 My New Mexico itinerary starts in Albuquerque but can end in El Paso, Texas, or Albuquerque.

The best way to explore New Mexico is by flying into the closest possible airport near an attraction and then renting a car and driving to other places within New Mexico. You can find general information about New Mexico, including weather, airports, transportation options, and more, in my New Mexico Travel Guide.

You could also follow the itinerary in reverse order, start your trip in El Paso, Texas and end it in Albuquerque, New Mexico. 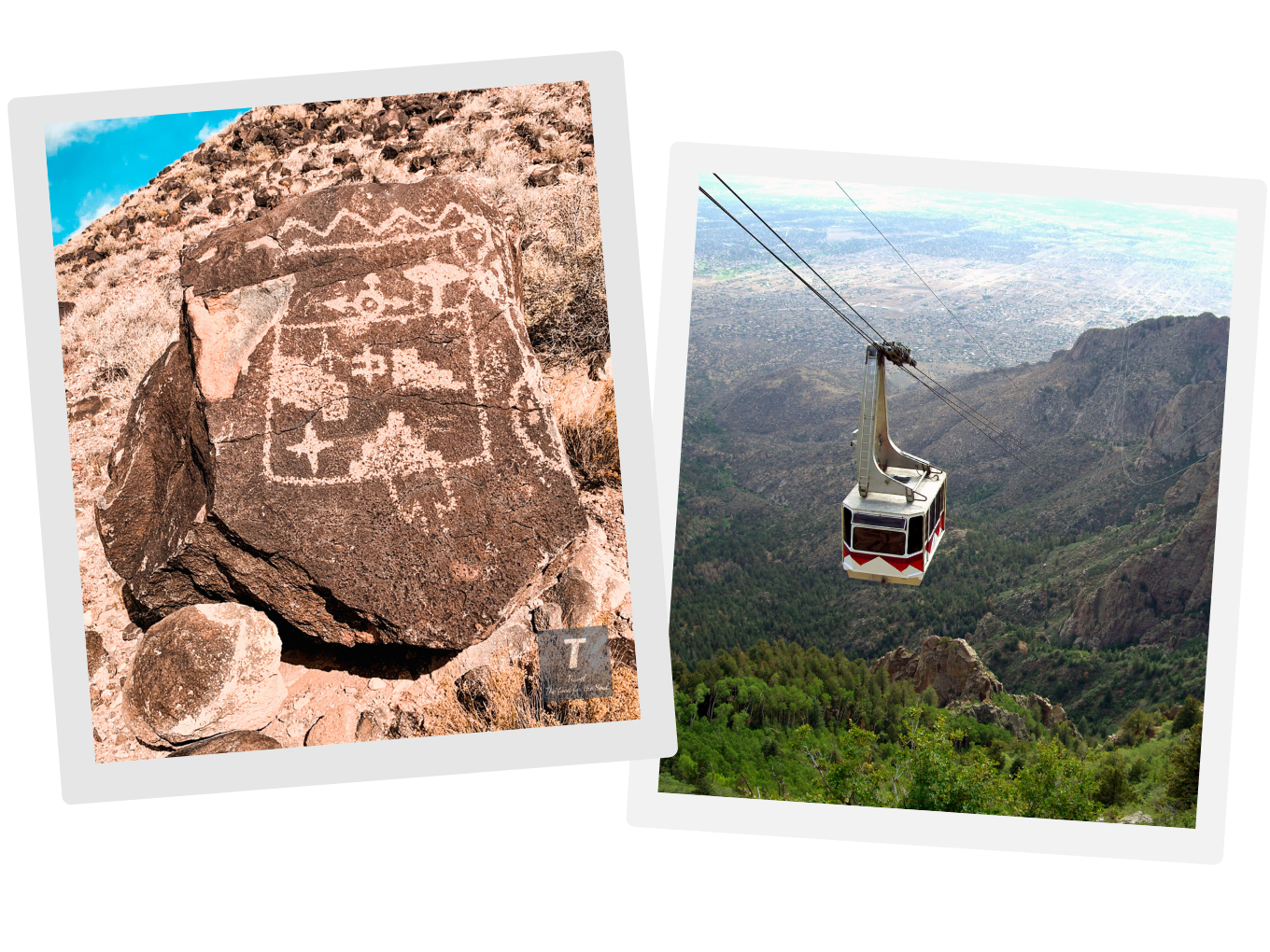 Home to the Albuquerque International Airport and several hotels and restaurants, the city of Albuquerque, New Mexico, is a great base when visiting Petroglyph National Monument and Sandia Peak. Though both attractions are located within Albuquerque’s city limits and easily accessible, I recommend getting an early start.

Sandia Peak Tramway: Ride the aerial tramway at Sandia Peak to catch some breathtaking views from the observation deck located at 10,378 feet above the ground. The observation deck offers panoramic views of the Rio Grande Valley and an option to grab a bite at the summit. The aerial tramway is operated only when weather conditions are suitable, so please consider calling ahead. Sandia Peak Tramway Address: 30 Tramway Rd NE, Albuquerque, NM 87122.

Overnight Stay: From Sandia Peak, drive to Santa Fe and stay there overnight. 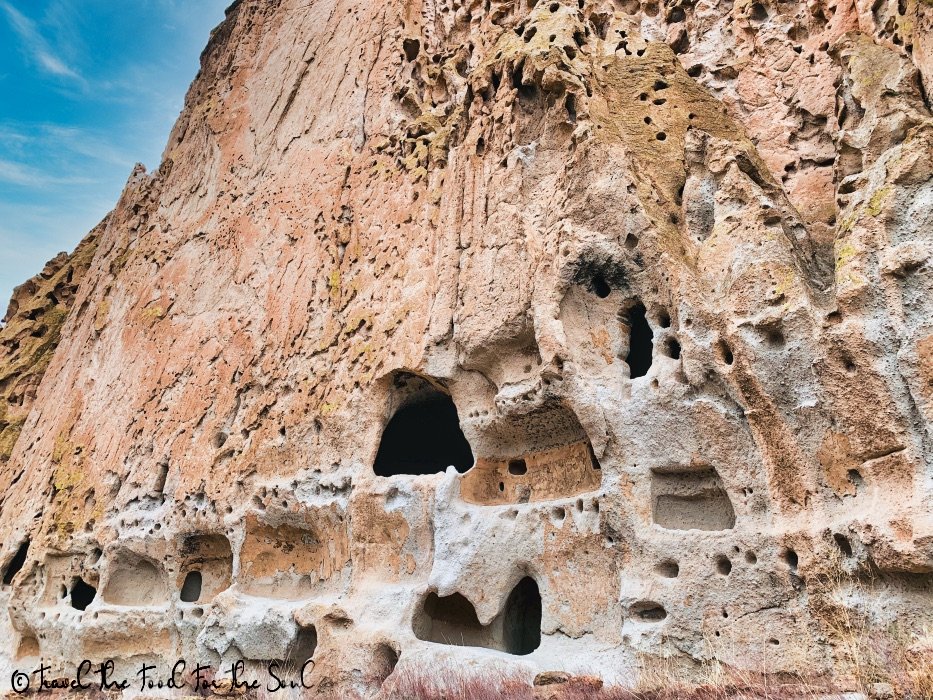 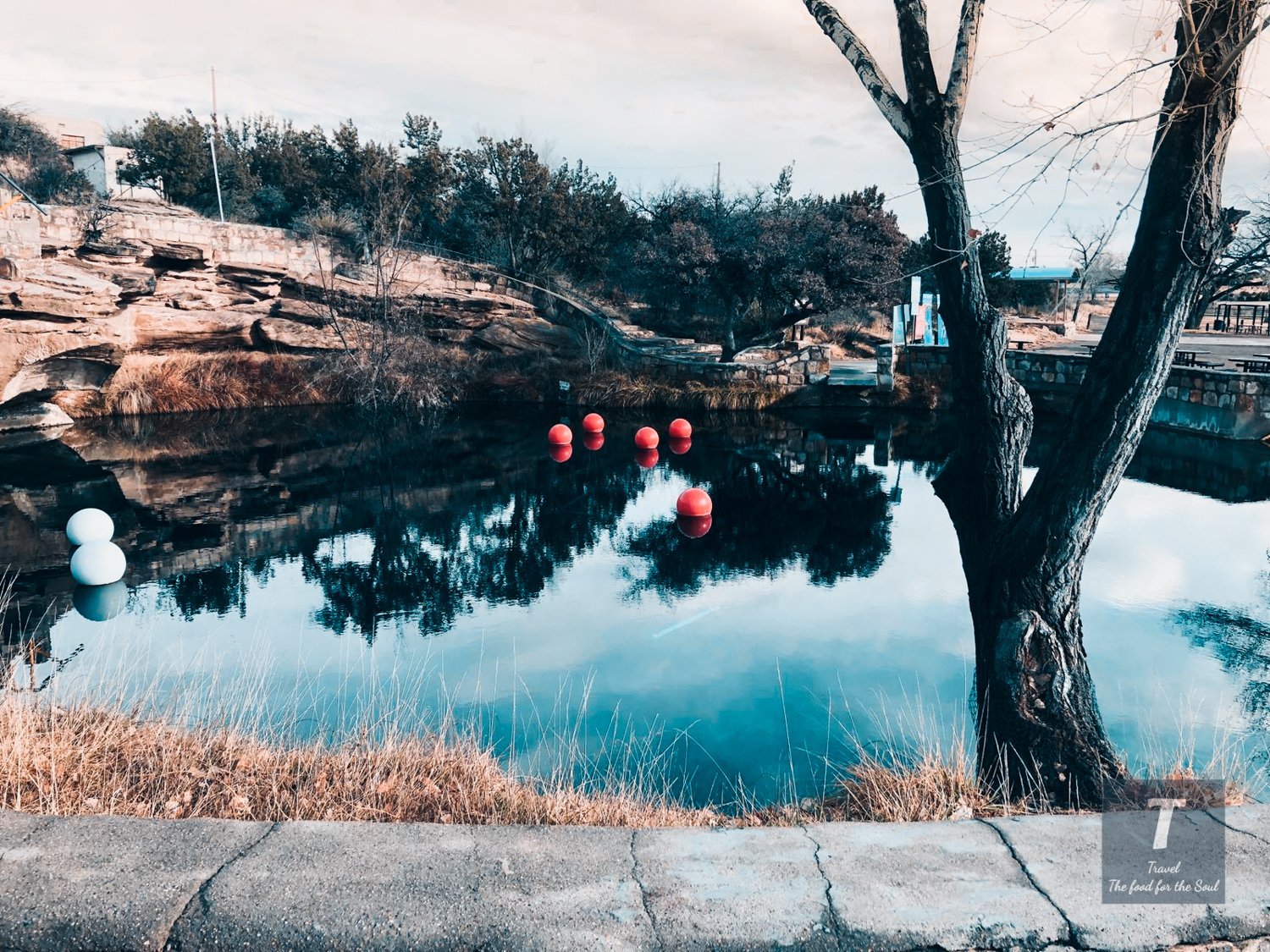 Make a quick stop at the Blue Hole and head to Carlsbad!

The Blue Hole: The Blue Hole is a natural wonder you must see while you’re in New Mexico! Indeed, a deep blue pool of water appears amid the desert like a blue gem emerging from the earth’s surface. Blue Hole Address: 1085 Blue Hole Rd, Santa Rosa, NM 88435.

Read More: The Ultimate Guide To The Blue Hole

Overnight Stay: Once done exploring the Blue Hole, head to Carlsbad and stay overnight. It’s a long three and a half hours drive from Santa Rosa.

See some of the most unique cave formations in the world and head to Alamogordo! 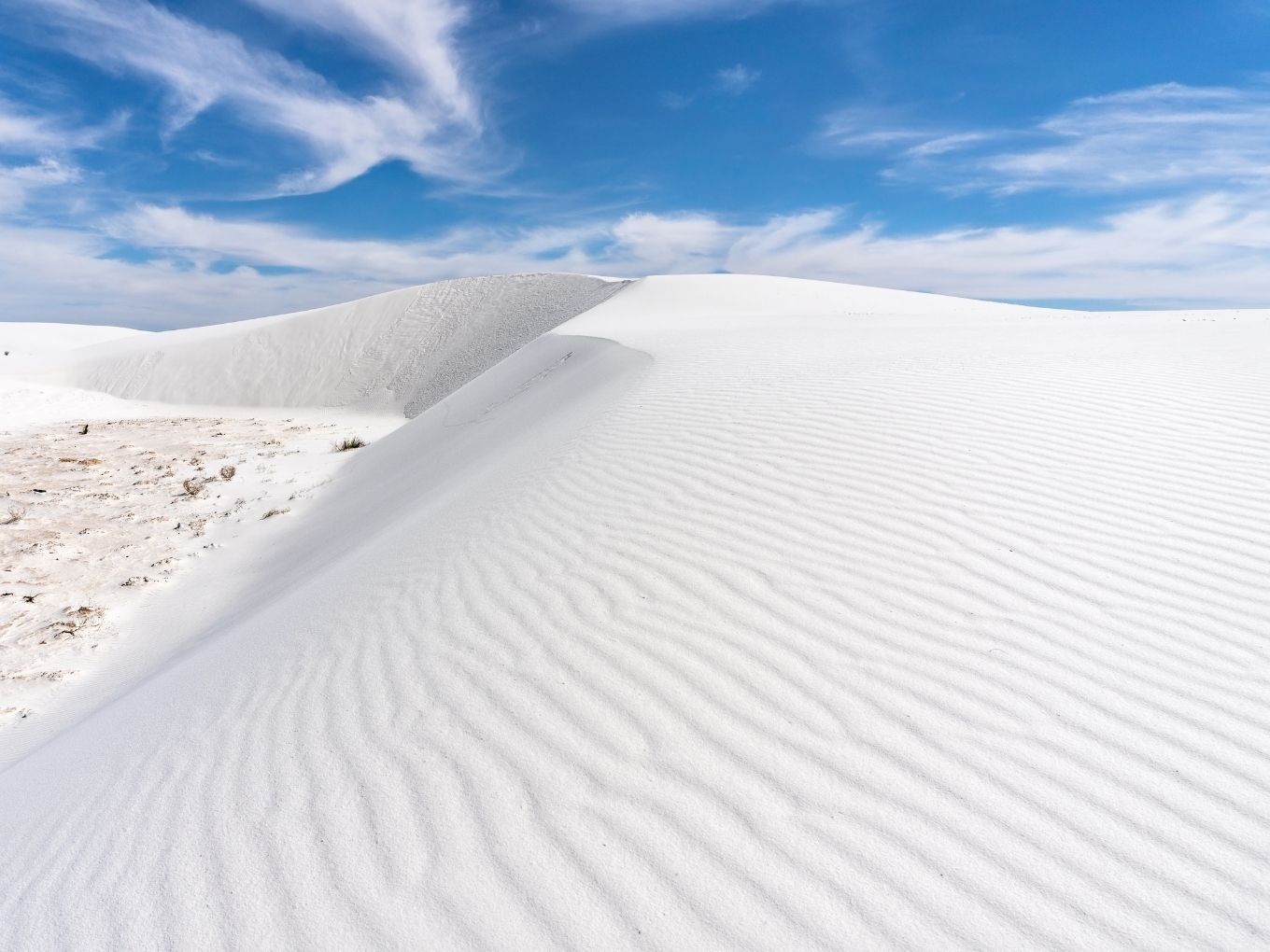 Drive through the Dunes Drive, 16 miles roundtrip, starting and ending at the visitor center, is one of the most spectacular scenic drives in the US. The Dunes Drive is the gateway to all hiking trails, vista points, sledding, and picnic areas within White Sands National Park. White Sands National Park Address: 19955 Highway 70, Alamogordo, NM 88310.

This is the last stop on the five day New Mexico road trip itinerary, and from here, you can head back to Albuquerque, New Mexico, 224 miles from White Sands, 3 hours 30 minutes drive. Or you can end your trip in El Paso, Texas, 96 miles, 1 hour 30 minutes drive. White Sands National Park is located close to New Mexico – Texas border and close to El Paso Internation Airport, El Paso, Texas.

You can end your New Mexico road trip at Albuquerque or El Paso, Texas. 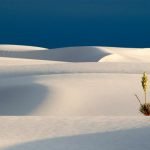 I hope you enjoyed reading the post, The Ultimate 5-Day New Mexico Itinerary, and I hope this will help you plan your trip to New Mexico.